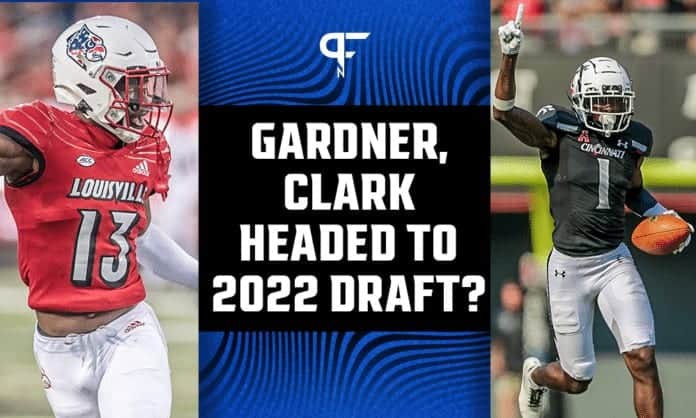 By Tony Pauline
September 18, 2021
What's in this article? Click to show
Ahmad Gardner and the Bearcats have a big showdown with Indiana
Will Kei’Trel Clark declare for the 2022 NFL Draft?
What other prospects are scouts chatting about?

Week 3 on the college schedule kicks off with several interesting matchups, most of them being the out-of-conference variety. Several of these games were discussed at length during this week’s edition of the Between the Hashes podcast, including 2022 NFL Draft prospects Ahmad Gardner and Kei’Trel Clark.

Ahmad Gardner and the Bearcats have a big showdown with Indiana

Cam Mellor and I discussed the matchup between Indiana receiver Ty Fryfogle and Cincinnati cornerback Ahmad Gardner, a favorite of many outside the scouting community. Gardner’s draft ranking will be debated for the next few months. However, people from Ohio close to the situation tell me they expect the junior to enter the 2022 NFL Draft.

Gardner has evidently had a lot of contact with agents. The belief is he’s close to choosing representation for the draft — if he’s not already made a decision.

Will Kei’Trel Clark declare for the 2022 NFL Draft?

On the heels of last night’s Central Florida-Louisville contest, sources tell me Louisville CB Kei’Trel Clark is giving serious consideration to entering the draft. For transparency’s sake, the discussion took part before Clark’s shoulder injury at the start of the second quarter. Over the summer, I graded ACC prospects and put Clark as a fourth-round prospect.

What other prospects are scouts chatting about?

Several scouts contacted me after seeing Florida State pass rusher Jermaine Johnson listed as a Week 2 riser. Their opinion? Johnson is finally meeting expectations and rising faster than any defensive player in the nation during the early part of the season. As mentioned during this week’s Risers and Sliders article, Johnson started just four games during his Georgia career before transferring to Florida State.

In two games this season, Johnson has already posted 4 sacks and 6 tackles for loss.  Presently, you’re looking at a Day 2 prospect who could move up further on draft boards.

Another defensive lineman that has impressed scouts is John Ridgeway of Arkansas, though it’s only been one game. The athletic defensive tackle missed the season opener against Rice after undergoing an appendectomy. He returned last week (his first game for the Razorbacks), registering 6 tackles, 1 tackle for loss, and 1 sack during Arkansas’ drubbing of Texas. I mentioned I had high hopes for the Illinois State transfer during the Razorbacks preview this summer. Ridgeway has not disappointed.