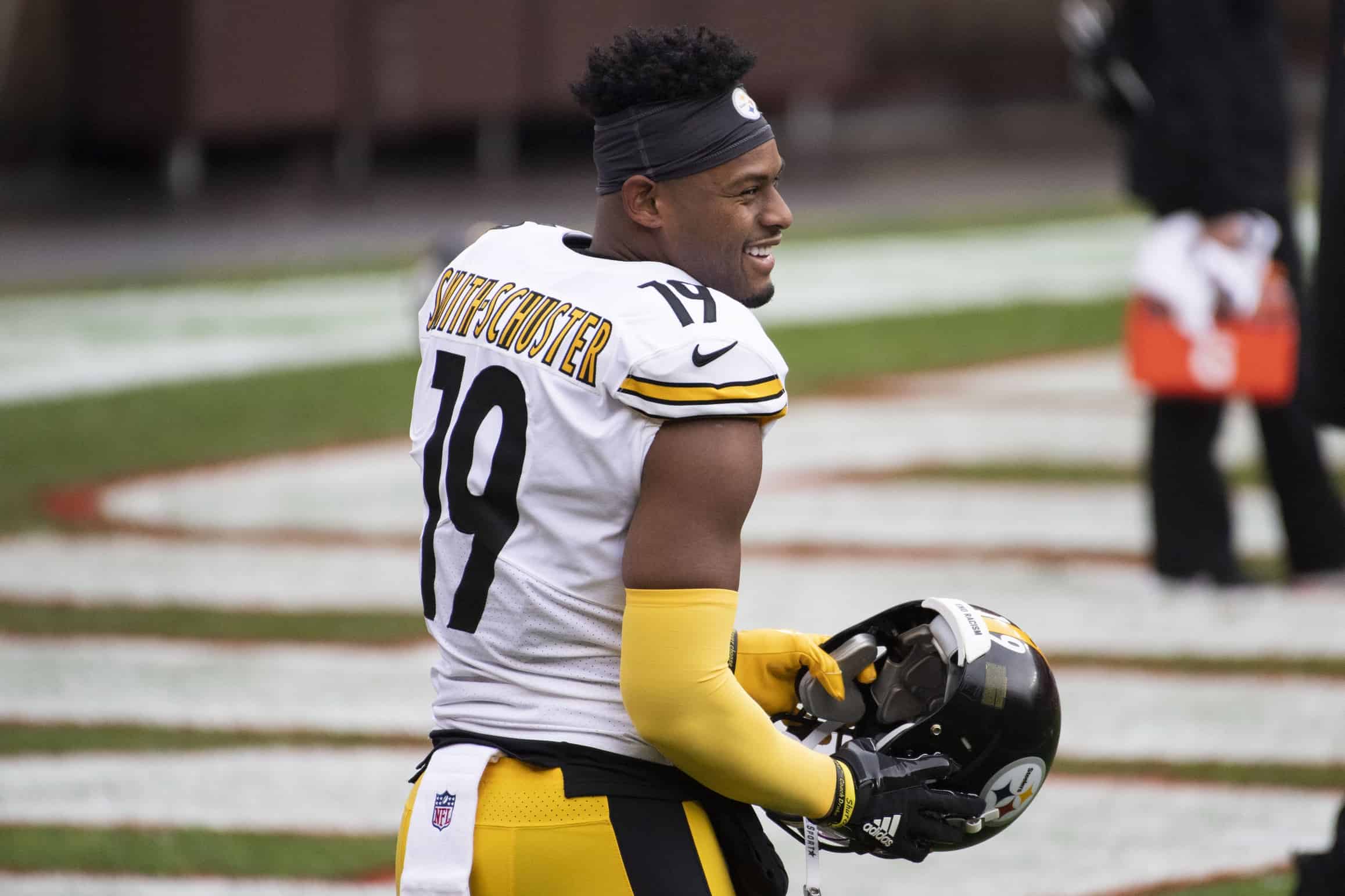 After a somewhat disappointing 2020 NFL season, Pittsburgh Steelers WR JuJu Smith-Schuster might have danced his way to a new landing spot once free agency opens up. As salary cap issues hit the Steelers in the reduced year, it is hard to see a path for Smith-Schuster to wear the Black and Gold again.

Two years later, we still wonder if JuJu Smith-Schuster can be a true WR1

If you had asked me back in 2018, I would have told you by now JuJu Smith-Schuster was the best WR in the league. I mean, how could you blame me? While paired with Antonio Brown, he was incredible on Pittsburgh’s offense. Smith-Schuster saw an astounding 166 targets in his second year — fourth in the NFL and only two behind Brown. He hauled in 111 of those passes for 1,426 receiving yards (fifth) and 7 touchdowns.

Yet, here we are two years later, wondering if he is capable of being the WR1. It’s hard to fault 2019 against him, as Mason Rudolph could not sustain a drive, and the passing game was non-existent.

But in 2020, with a “healthy” Ben Roethlisberger, Smith-Schuster caught 97 of 128 targets for 831 yards and 9 touchdowns in 16 games. However, he was second on the team in targets and yards to Diontae Johnson and fifth in yards per reception.

The problem is exacerbated when you add league-wide context to his numbers. Smith-Schuster was seventh in targets, ninth in receptions, but 38th in yards.

Will a reduced 2021 salary cap impact landing spots for WRs like JuJu Smith-Schuster in free agency?

Due to lost revenue of the 2020 season, the NFL salary cap took a massive hit. Adam Schefter recently reported the 2021 salary cap will be $182.5 million. Teams are cash-strapped and need to make difficult decisions regarding veterans and how bullish they can be in free agency.

As for someone like Steelers WR JuJu Smith-Schuster, his average annual value could be one of the highest of this free agency class at WR. Spotrac has his market value estimated at $16.1 million over a five-year, $80.727 million contract.

As a fan of the game and also the Steelers, I love JuJu Smith-Schuster. He grew on everyone from his escapades with his bike, to his dog Boujee, and just acting like a guy living his best life. Look, I think he can be a great wide receiver, and he is a lot of the time. I am all for a guy making his bread, and I will never stand between a man and his meal. I am firmly pro-player, and I hope he gets everything he can.

But from a production vs. expectation standpoint, there is a legitimate conversation to be had.

Where are some possible landing spots that JuJu Smth-Schuster could choose during free agency in 2021?

Could the Steelers re-sign WR JuJu Smith-Schuster in free agency?

As much as I would like to see him back, it’s not going to happen. The Steelers are going to be facing cap issues in 2021. Currently, they are projected under the salary cap by $6.12 million but have other pressing issues. One of which is giving T.J. Watt the largest contract in franchise history.

Even JuJu Smith-Schuster knows he won’t be back in Pittsburgh. In a recent stream on Twitch, he wore jerseys that viewers requested and titled the stream: “March 17th, FREE MAN.” Later, he posted a poll on Instagram, asking fans if he will stay in Pittsburgh, with the answers being “I hope so” and “That’s a negative.” JuJu even voted that he would be looking for a new landing spot.

The Dolphins are ahead of schedule in their rebuild. Miami almost made the playoffs and has two first-round picks in 2021, including Houston’s third overall pick.

The Dolphins believe in Tua Tagovailoa (for now), and the team will have a new offensive coordinator following the resignation of OC Chan Gailey.

Miami needs weapons on the outside. DeVante Parker is okay, but at times cannot get separation. Preston Williams, while seemingly talented, can’t stay healthy. Outside of those two, they lack another experienced WR option.

It’s likely they add one of the talented receivers in this year’s draft class and could bring in JuJu Smith-Schuster as well via free agency. With the third pick, the Dolphins could draft Ja’Marr Chase from LSU and have Smith-Schuster play the slot role while Chase works the perimeter. They would have two stud pass catchers, both under the age of 24, and could be together for another four years. The salary cap is also not an issue — the Dolphins have a projected cap space of $33.09 million heading into 2021.

The Jets have plenty of money to throw around at $69.89 million currently under the cap. They need a WR1 on their team as well. Jamison Crowder is a capable possession WR but not explosive like Smith-Schuster. The team did select Denzel Mims, who could be the real deal, but injuries and a subpar offense slowed his progression.

New York has the second overall pick, and if the Jets choose not to bring back Sam Darnold, BYU’s Zach Wilson appears to be the QB who the Jets will select. He will need targets, and adding JuJu Smith-Schuster would be a great addition to an otherwise mediocre locker room. Also, the city fits his personality. Playing in the Big Apple under the bright lights is the perfect place for Smith-Schuster to continue to elevate his personal brand alongside his game on the field.

There is no team more devoid of offensive talent than the New England Patriots. N’Keal Harry is not developing, while Julian Edelman is consistently banged up and 34 years old. In 2020, their top receiver was a UDFA from NC State (Jakobi Meyers).

On Friday, they re-signed Cam Newton on a one-year, $14 million contract, and they can’t afford a repeat of last year. Newton did not throw a touchdown pass to a wide receiver until Week 11 of last year. Only 2 of his 8 touchdown passes were to receivers.

The Patriots need to land a WR to take the No. 1 spot on their offense, and Steelers WR JuJu Smith-Schuster would fit that requirement.

Born and raised in California, Smith-Schuster even went to college at USC. Most of his family live in the state, making the Los Angeles Chargers an intriguing landing spot for JuJu Smith-Schuster.

The Chargers are sixth in cap space ($41.45 million) and could pair Smith-Schuster up with an explosive offense led by the 2020 NFL Rookie of the Year in Justin Herbert. Also, there would be no pressure to be the team’s alpha: WR Keenan Allen holds that role down. Also, as I mentioned with New York, is anywhere better for growing a brand than Los Angeles?