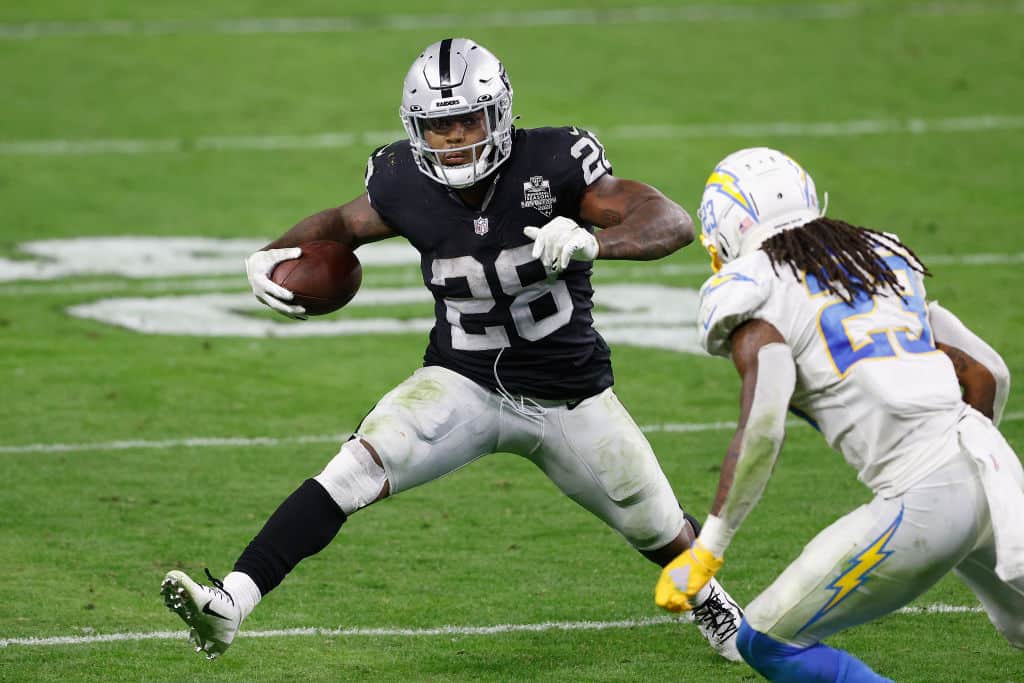 It’s fantasy football playoff time, baby! All of your hard work has come down to this. If you’re still playing this week, and you have Josh Jacobs on your roster, he’s likely part of the reason you’re there. With all of his ups and downs, though, Jacobs has been frustrating as well. Now that you’re in the finals, what is Josh Jacobs’ fantasy outlook for Week 16?

Let’s look at the past to help us predict the future.

Jacobs finished with solid numbers, but he was clearly a rookie last season with much to learn. He finished as an RB2 in fantasy, and everyone was preparing for him to do even better this year, including Jacobs.

Expectations for a sophomore leap

During the preseason, I wrote about how Jacobs was in for a huge leap, both in terms of talent on the field and fantasy production. Jacobs was a top-12 RB in most drafts in August, even going in the first round in some. Everyone expected Jacobs to take a sophomore leap, and for the most part, he has. As the season’s worn on, however, injury concerns have limited his upside.

Jacobs’ started the season hot but cooled down

Jacobs started the year with a monster game. In Week 1, Jacobs rushed 25 times for 93 yards and three touchdowns. He added four catches on six targets for 46 more yards, finishing with 35.9 PPR points on the week. Jacobs managers were definitely happy with this output, but unfortunately, it was all downhill from there.

Jacobs only scored 20 or more PPR points three more times throughout the season. He has also scored fewer than 10 PPR points three times, meaning he has a high ceiling and a low floor. Looking only at the numbers misses one crucial factor: Jacobs has been hurt recently. This has definitely impacted his fantasy potential.

Josh Jacobs missed Week 13 due to an ankle injury he sustained in the second half of the game prior. At the time, the Las Vegas Raiders were still very much in the playoff race and didn’t want to risk further injury to Jacobs by playing him. The team relied on Devontae Booker to handle the load in Jacobs’ absence.

Booker had broken out a few weeks prior and was an okay alternative in most regards. Booker scored 21.3 PPR points in Week 10 thanks to two rushing touchdowns on 16 attempts. This tied for the most attempts he’s had all year.

By Week 13, however, the story had changed, and Booker was unable to produce as well against the lowly New York Jets. Booker rushed for 16 times again but only produced 6.1 PPR points this time. Both the Raiders and fantasy managers were ready for Jacobs to come back, and in Week 14 he did indeed return to action.

Jacobs’ 2020 season by the numbers

Jacobs played last week, and all signs point to him playing this week, so let’s look back at his season by the numbers to see what we can learn.

Josh Jacobs thus far is RB7 in overall PPR scoring for the season with 203.5 points, 15.7 PPR points per game (RB12). He’s played in 13 games and rushed 245 times for 907 yards (3.7 ypc) and 10 touchdowns. Jacobs has caught 33 of 42 targets for another 238 yards as well. These overall numbers are pretty close to his overall 2019 numbers. He has fewer rushing yards on three more attempts but more receptions, passing yards, and touchdowns.

Jacobs told everyone that he would be more productive in the passing game this season. So far, that’s been true. He’s played in the same amount of games, but his targets went up from 20 last season to 33 so far this year. He has definitely been more involved, but he’s been less productive with his increased touches.

So with that in mind, what should we expect from Josh Jacobs in your fantasy finals?

Facing the Miami running back defense

After examining the player, we must then look at the matchup. Using PFN’s own Defensive Points Against Consistency Score (DPACS), we see that the Miami Dolphins are 28th against running backs. This means that only three teams give up less consistent positive outcomes to the running back position. Not great.

The Dolphins are also still in the playoff hunt, meaning they have something at stake, and their defense should come to play. All of that combined with Jacob’s reduced production and potential for re-injury gives us a pretty murky picture this week.

For me, Josh Jacobs is a definite starter in your fantasy finals. You can’t bench him unless more information comes out about his injury or the coaches tell us he’ll be limited. Jacobs hasn’t been stellar this year, but he’s still the lead back for a team that will need to lean on him.

Jacobs is RB10 in Consistency Score (CS) with a 5.71, meaning he’s consistently given you positive fantasy output. On the other hand, Jacobs is RB55 in our Fantasy Points Differential (FPD) metric, scoring 6% fewer fantasy points than expected. This means that he’s done less than he should with the touches he’s had.

Jacobs should be in for solid RB2 work this week. With the current running back landscape in fantasy, Jacobs’ consistency is hard to find. With Carr likely missing the game and Ruggs still on the reserved list, Jacobs should be in line for a lot of work. Fire him up with confidence, but don’t expect a 30 point game this week. The Dolphins are tough, but Jacobs is tougher, and he could be the reason you won it all this year.

Andrew Hall is a writer for PFN covering the NFL and fantasy football. You can follow him on Twitter: @AndrewHallFF.

In this article:Devontae Booker, Josh Jacobs