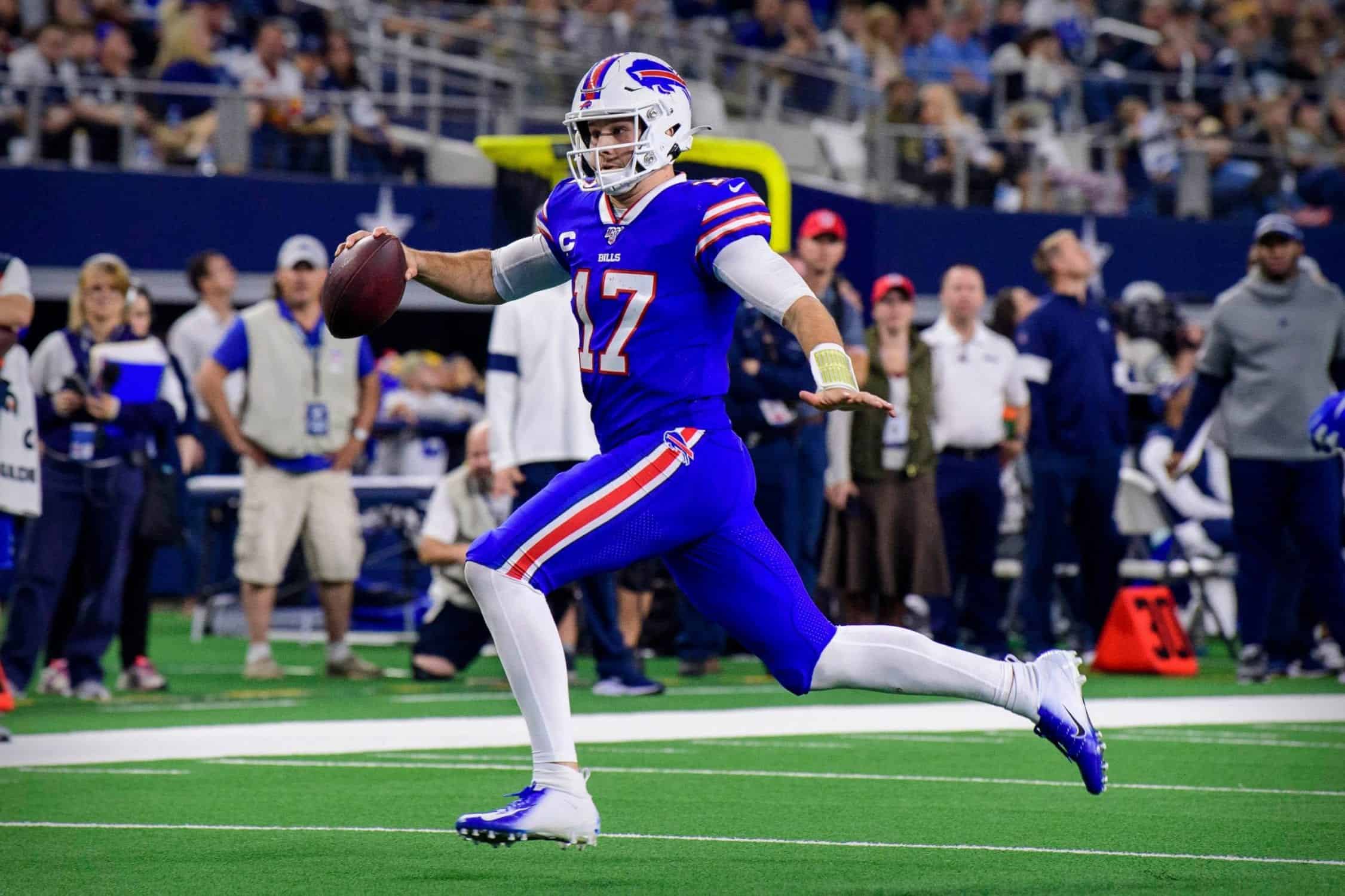 With the focus on MVP frontrunners Lamar Jackson and Russell Wilson, it can be easy to forget about players like Josh Allen and Ryan Tannehill. Both were widely disregarded for various reasons at the beginning of the season, but any fantasy owner who invested is likely thrilled they did. But just how good have they been, and what are their fantasy football prospects in 2020?

Don’t look now, but Josh Allen is well on his way to becoming a fantasy football superstar. The Buffalo Bills quarterback is currently the QB6 on the season and is showing no signs of slowing. Those studying the tape have been impressed by the second-year signal caller’s improvement, and he has the Buffalo Bills on the brink of the playoffs.

Whether it’s been Michael Vick, Colin Kaepernick, Robert Griffin III or Cam Newton, we’ve seen the value of dual-threat quarterbacks in fantasy and Allen is no different. He’s on pace to finish with over 500 rushing yards for the second consecutive season, trailing only MVP-elect Lamar Jackson and Kyler Murray among quarterbacks. His eight rushing touchdowns are the most at the position and are the eighth-most from in the NFL. His size, athleticism and scrambling ability allow him to extend plays in a way that few in the league can and gives him a higher floor than most, as evidenced by the fact that he’s only had fewer than 15 fantasy points twice this season.

Allen isn’t perfect. PFN Offensive Share Metric (OSM) has him as the QB27 this season. John Brown, one of the premier deep threats in the game, complements him well and is capable of getting open, but too often, we still see Allen’s spotty accuracy letting him down on what should be a big play. Many of the pre-draft questions that analysts had remain but anybody wanting to assign the dreaded “bust” label to a prospect will have to look elsewhere.

The exciting part for fantasy owners invested in Josh Allen is the potential upgrades around him. Dawson Knox and Devin Singletary have impressed as rookies and should only continue to improve, boosting Allen’s fantasy football prospects for 2020 and beyond. Cole Beasley has been a reliable option in the slot and has emerged as a safety blanket for Allen in big moments. Still, there’s no doubt that the Bills could give him more help and should do so in the offseason. Our most recent mock draft has the Bills taking TCU wide receiver Jalen Reagor, one of the top athletes in college football, in the second round.

Allen has already developed as a passer throughout his career with significant improvements in passing yards per game, passing touchdowns, interceptions, and completion percentage from last year to this one. A further step could see him secure his spot among the undroppable for years to come.

After being dealt from the Miami Dolphins to the Tennessee Titans, most people saw Ryan Tannehill as little more than a safety net for the Titans. If Marcus Mariota, their underwhelming but highly-drafted starting quarterback got injured, as form would suggest he might, Tannehill could step in as their underwhelming but highly-drafted backup. He might not win them games, but he wouldn’t lose them, and the Titans could continue doing what’s expected of them each week.

In what has to go down as one of the more surprising storylines of the season, Tannehill had other ideas, and his fantasy football prospects in 2020 now look drastically different. When Mariota was benched in Week 6, Tannehill stepped in and hasn’t looked back. His 15 touchdown passes to only five interceptions have been the product of a more aggressive mentality than he showed in Miami, and he’s showing the hunger of a man who realizes that he may be on his last chance as a starting quarterback.

Tannehill and Derrick Henry have benefited each other. Teams have to respect the passing game more than they did under Mariota, but they still realize how dangerous the Titans’ ground attack is, allowing Tannehill to find favorable matchups. While many expected the receiving corps to be spearheaded by Corey Davis and Delanie Walker, it’s been rookie AJ Brown who has been the focal point, leading the team in receptions, yards, and touchdowns.

Tannehill’s first game as a starter was Week 7 against the Los Angeles Chargers. Since that point, only Lamar Jackson and Matthew Stafford have averaged more points per game at the quarterback position. And Stafford only played three times. Tannehill has a 35.89 PFN Offensive Share Metric (OSM) grade, the highest among all quarterbacks this season. The Titans offense is successful BECAUSE he’s playing well, despite it being in an attack designed for Marcus Mariota.

So what are the fantasy football prospects of these two players in 2020 and beyond? Who would you rather have on your roster going forward?

Josh Allen is unquestionably the safer play. He’s 23 years old and the unquestioned franchise quarterback in Buffalo. His team believes in him and is looking to build around him. His rushing upside gives him a high floor, and his passing stats are improving, even if enhanced receiving talent is a contributor. He will go higher in redraft, and he’s much more valuable in dynasty.

But, despite his impressive performances, Ryan Tannehill can still be acquired for cents on the dollar. He won’t be on many fantasy radars in redraft leagues and could even be a bargain in dynasty with owners thinking the season has been a fluke. Will he be a top 5 option going forward? Probably not. But the Titans should have seen enough that he’ll be their starter next season, and the coaching staff will spend the offseason tailoring the offensive game plan to him.

If all things are equal, then Josh Allen is the player that you want. He might not ever be the league’s MVP, but he consistently puts up fantasy points. He throws deep, he runs, and he’s determined to get into the end zone. But that doesn’t mean that Tannehill should be disregarded. Those who put less of an emphasis on the quarterback position could benefit far more from a high risk but high upside option like Tannehill than many of the other players likely to be taken in the same range.

Andy Gallagher is a writer for the Pro Football Network covering Fantasy Football. You can follow him on Twitter at @AndySGallagher.