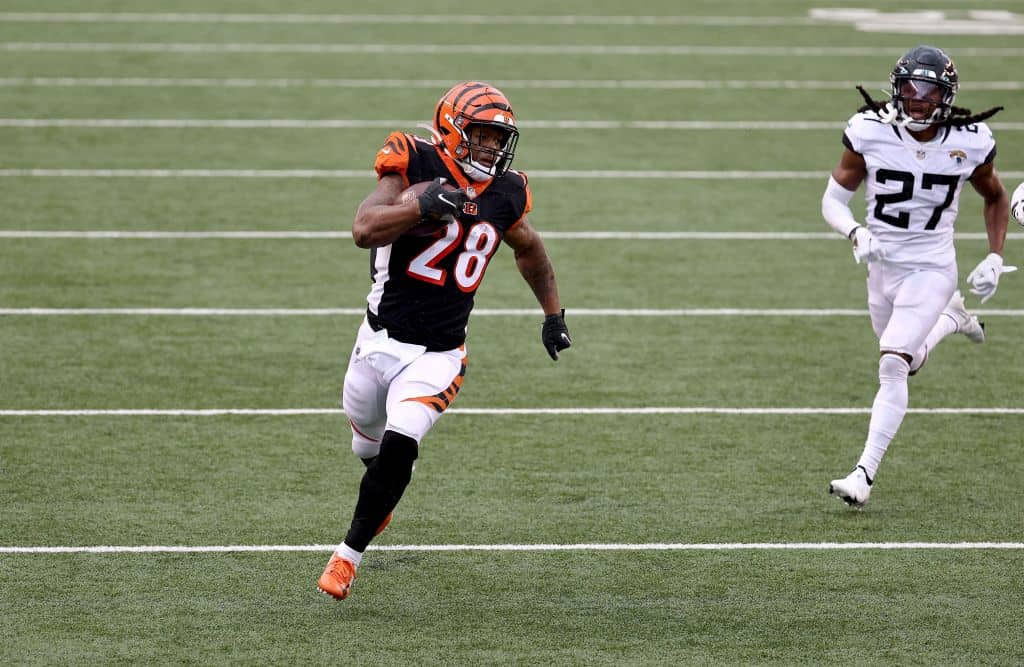 The Cincinnati Bengals defeated the Jacksonville Jaguars on Sunday to pick up the first win of budding star Joe Burrow’s career. However, the rookie wasn’t the most statistically successful player for Cincinnati last weekend. That distinction goes to Joe Mixon, who totaled 181 yards and three touchdowns. It was a stellar day from one of the NFL’s highest-paid running backs. And yet, his performance isn’t quite as impressive as it might seem on the surface. PFN’s Offensive Value Metric (OVM), which grades players based on how valuable they were to their team’s offensive success, has consistently rated Mixon poorly in the past, and Sunday’s game was no exception. He received a grade of just 5.77, indicating that he did not contribute as much to the Bengals victory as his statistics would suggest.

I know the idea that Mixon wasn’t valuable to the Bengals sounds insane on the surface. After all, I just finished telling you how impressive his box score statistics were. But “value” and “statistical success” are not identical concepts. A player can have a small role in their offense but get more out of their limited opportunities than anyone else, while a major offensive contributor might not be taking full advantage of their chances. Mixon falls into the second category. While his statistics might look impressive, many other players did more with less.

In order to explain my point in further detail, we need to look at the advanced metrics that go into calculating OVM. Let’s start with the positives. Mixon performed remarkably well on what the NFL calls the “efficiency rating”. Simply put, the metric is the number of physical yards a running back travels for each yard they gained on the field. Mixon was one of the best performers on this metric last week. He only ran 2.9 yards for each on-field yard he gained, meaning that he was highly efficient with his movement.

The second metric is less impressive from Mixon, but still not terrible. The NFL calculates how many yards a running back should have gained on each of their carries. In a sense, Mixon performed quite well on this statistic, gaining more yards than expected on 41.3% of his rushes, which was above average in Week 4. However, all that effort only resulted in a total of seven extra yards, meaning that 144 of his 151 rushing yards could have been gained by an average NFL running back. Considering that there were several players who totaled more than 100 more yards than expected last week, Mixon’s total looks rather pitiful.

This brings us the final statistic, the one that really explains why OVM states that Mixon’s value to the Bengals was so low: the percentage of time that the Jaguars defense stacked eight or more defenders in the box against him. According to the NFL’s data, Mixon was in that position on just 8.0% of his snaps. That is an incredibly low percentage. For comparison, three running backs were in that same situation 50% of the time in Week 4. In other words, Mixon was rarely challenged on Sunday.

That statistic makes it easy to see why Mixon’s efficiency rating was so good: being an efficient runner isn’t particularly difficult when facing such limited opposition. It also explains how he gained so many yards despite only providing a few more yards than expected. Jacksonville gave him so much room that he was essentially gaining yards at will, something that it doesn’t take a particularly talented running back to accomplish.

Put all of those metrics together, and the picture becomes clear: Mixon took what the Jaguars gave him and not much more. He took advantage of an easy situation but didn’t go above expectations. In this game, that was enough to produce exceptional statistics. However, against better defensive teams it might not work out as well.

I’ve said this before, but the NFL does not provide the public with advanced statistics relating to running backs as receivers. As such, while I can talk about Mixon’s receiving statistics and use them to give more context for his grades, we can’t incorporate them into his OVM grade. I wish that weren’t the case, but there’s nothing I can do. Please direct any complaints on the matter to the NFL.

With that disclaimer out of the way, it is worth noting that Mixon is far from a receiving back, at least by modern standards. Alvin Kamara, for example, caught more than twice as many passes as Mixon did last season. Even Nick Chubb, who is not known for his receiving abilities, outperformed Mixon in that regard, and he is consistently better than Mixon is as a rusher.

Against Jacksonville, while Mixon did catch six passes and score a touchdown, he only totaled 30 yards. Arguably, he wasn’t even the most productive receiving back in that game, as Jacksonville rookie James Robinson had four receptions for 32 yards. Mixon might be a capable receiver, but he’s no Christian McCaffrey. As such, even if we could include his receiving statistics in his OVM grade, I’m not certain that it would help him significantly.

Any game in which Mixon is this statistically successful is likely to be a win for Cincinnati. It is difficult to lose when a single skill position player scores three touchdowns. However, Mixon’s low OVM grade indicates that he was not the primary factor involved in creating those statistics.

Unfortunately, this is a consistent trend. Against the Bengals first three opponents, Mixon received grades of 3.19, 9.4, and 1.29, respectively. The 9.4 in Week 2 is a solid return for a running back, but the other two grades are well below average. It is a concerning pattern for Mixon, one that suggests that he relies heavily on the play of his teammates and his opponents to be successful. Of course, that’s true of all players, at least to a certain extent, but Mixon is guilty of it more often than many others.