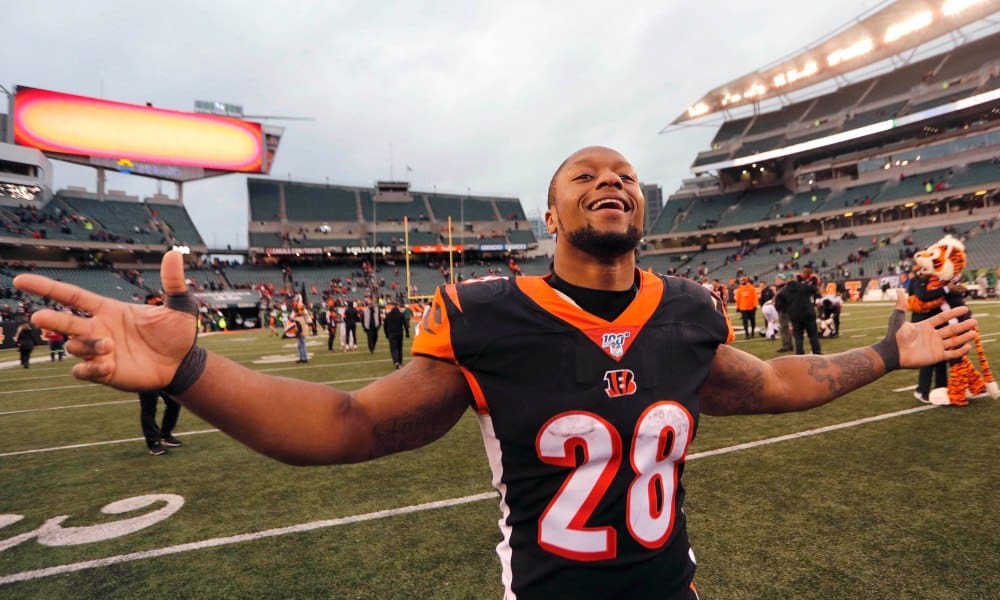 Dec 1, 2019; Cincinnati, OH, USA; Cincinnati Bengals running back Joe Mixon (28) reacts as he runs off the field after the Bengals defeated the New York Jets at Paul Brown Stadium. Mandatory Credit: David Kohl-USA TODAY Sports
What's in this article? Click to show
Explaining the metrics that go into calculating an OSM grade
Mixon’s advanced metrics show that he provided very little value in 2019
Looking at Mixon’s weekly grades
Mixon’s lack of value to the Bengals in 2019 is a bad sign for Joe Burrow

Statistically speaking, Joe Mixon had a reasonably successful 2019 season, rushing for 1,137 yards and five touchdowns. That total put him inside the top 10 in rushing yards. Given that Mixon played on what was easily the NFL’s worst team last season, those statistics seem rather impressive. However, despite those accomplishments, Mixon was actually one of the NFL’s least valuable running backs last season.

PFN’s Offensive Share Metric (OSM), which measures how responsible a player was for their statistics, gave him a grade of just 9.11, the third-lowest grade at his position in 2019. The implication of a grade that low is that Mixon contributed very little to the creation of his statistics, and provided less value to his team than almost any other running back in 2019.

Explaining the metrics that go into calculating an OSM grade

So, why does Mixon’s OSM grade disagree so vehemently with what his traditional statistics tell us? To find out, we need to look at the statistics that make up a player’s OSM grade. For Mixon, we need to talk about three in particular. The first is his yards per carry (YPC), which you should all be familiar with. The other two metrics aren’t talked about as frequently, but when you break them down, they aren’t any more complicated.

Related | OSM Back to the Future: Isaiah Crowell’s 2018 top-ranked performance for the Jets

The more convoluted of the two metrics is what’s called the efficiency rating. It is calculated by taking the number of yards of physical distance that a player ran and dividing it by the number of statistical yards they gained. A lower efficiency rating indicates that the player in question ran in a straighter line, and therefore with less wasted movement.

The other metric is less complicated. It looks at the percentage of time defenses put eight or more defenders in the box against a running back and indicates how much resistance a running back had to deal with during a game.

With those explanations out of the way, let’s look at how Mixon performed on these metrics across the entire season. His overall efficiency rating wasn’t that terrible. At 3.95, it was relatively middle of the road. Similarly, his YPC was fairly average as well at 4.1.

However, the percentage of time that he faced eight or more men in the box was what dragged his grade down. At 7.91% of the time, his percentage was the third-lowest in the NFL. In other words, while Mixon’s efficiency and YPC were roughly average, he gained those mediocre statistics while facing very little resistance from opposing defenses.

It is important to mention that the OSM does not take into account a running back’s receiving statistics when calculating their grades. Unfortunately, the data required isn’t available. To a certain extent, this exclusion does Mixon a disservice, as he was a decent receiver last season, catching 35 passes for 287 yards and three touchdowns.

However, I can’t say either way how efficiently he produced those numbers. Clearly, though, the data on his running abilities show that Mixon provided almost no value to his team in that capacity in 2019.

Taking a closer look at Mixon’s weekly grades only furthers this idea that he struggled in 2019. The chart below shows how his week-to-week grades, represented by the black dots, compared to the regular season average at the running back position, represented by the yellow line. 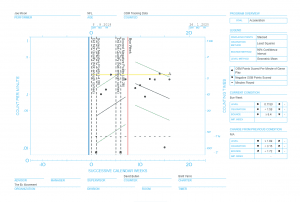 Mixon’s weekly grades were extremely inconsistent. They rarely went above the league average, and on a pair of occasions, actually dipped into the negatives. Put those extremes together, and you get a player with mediocre highs and frighteningly low lows, which is obviously not an ideal combination.

A brief look at Week 7

Looking at Mixon’s weekly grades, I can’t help but talk about one game in particular. The chart doesn’t display negative numbers, so it might not be immediately apparent, but Mixon’s grade in Week 7 wasn’t just slightly in the negatives; it was an almost unbelievable -86.28. It’s difficult for me to overstate how terrible that is.

For some perspective, that is the second-worst grade received by any player in the last four years of data. And even that doesn’t quite capture the extremity of Mixon’s grade. The next grade on that list was more than 50 points worse. Mixon’s performance in Week 7 was one of the least valuable we have ever seen, and it has almost no competition for that dubious honor.

Unsurprisingly, Mixon’s advanced metrics during that game were abysmal.  Despite facing eight or more defenders in the box just 20% of the time, his YPC was a paltry 0.2, and his efficiency rating was a staggering 72.18. His shocking lack of efficiency in the face of middling resistance meant that his play was actively detrimental to Cincinnati’s chances of winning.

When looking at the Bengals depth chart, it isn’t hard to see that the first overall pick, Joe Burrow, was not going to have an elite supporting cast during his rookie season. Based solely on his traditional statistics, Mixon might have seemed like one of the few bright spots. Unfortunately, his lackluster performance last season is only more evidence that Burrow could have a rough time in 2020.

A significant improvement from Mixon could go a long way towards improving his circumstances, but I have my doubts about that possibility. His performance last season provided almost no value to the Bengals offense, and he was only slightly better in 2017 and 2018, when he received grades of 13.24 and 13.87, respectively. Barring a dramatic improvement from 2019, it seems unlikely that Mixon will provide much value in 2020 either.