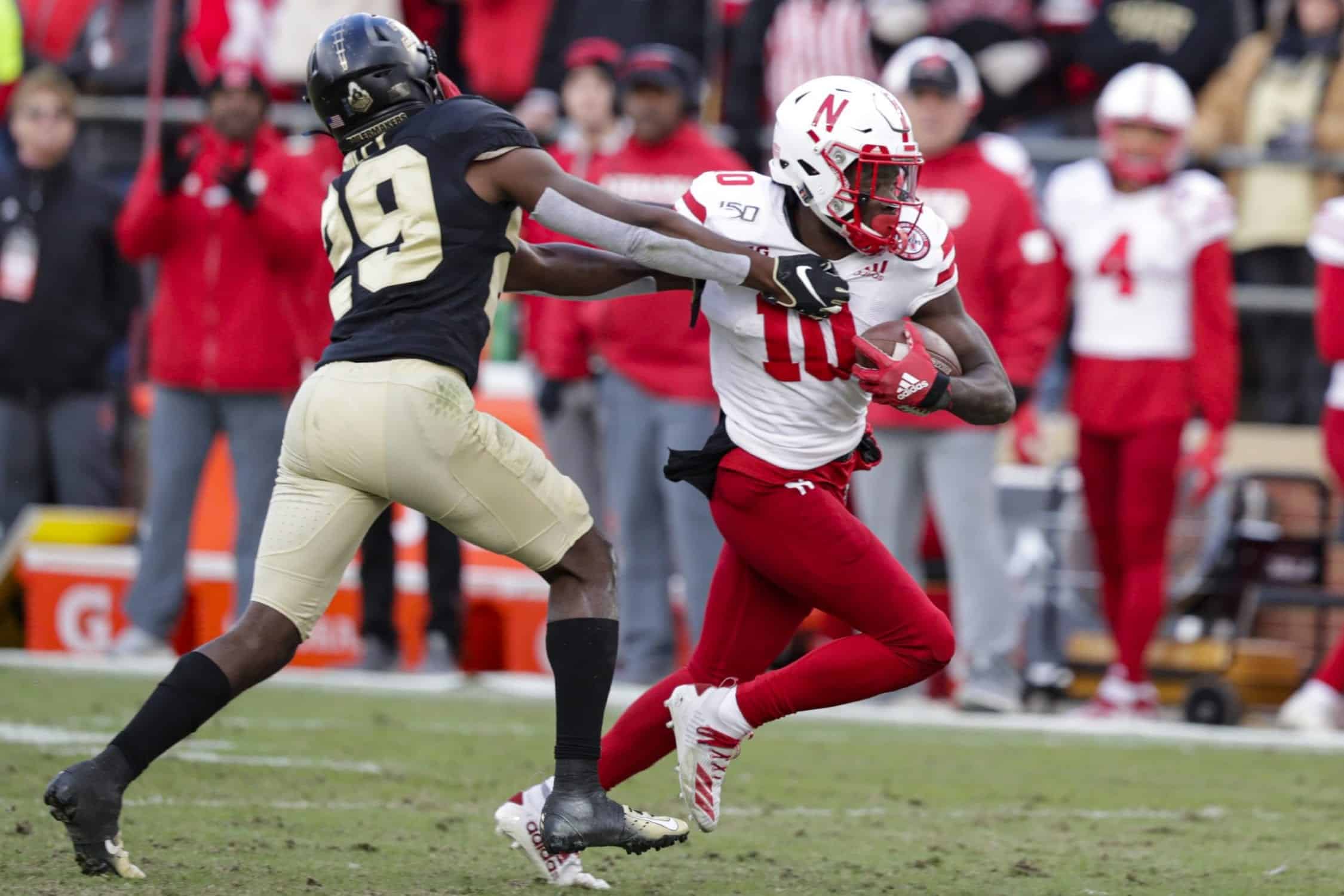 The Nebraska Cornhuskers lost another name to the transfer portal this week. The departure of their star wide receiver is another setback for the Big Ten program, but did JD Spielman boost his NFL Draft stock by seeking a new home for his senior season?

On Monday, Nebraska announced that they had “mutually parted ways” with Spielman after a period of absence from the program. Head coach Scott Frost had expected Spielman to be back for the summer after the wide receiver returned home to Minnesota to deal with some “personal health problems” over the spring, but Spielman will now find a new place to play.

Spielman has been impressive for Nebraska since he arrived as a three-star recruit in 2016. He is the only Nebraska player to have three seasons with over 800 receiving yards. He ranks second in 100 yard receiving games for the program. Spielman only needed 201 receiving yards to overtake Stanley Morgan Jr. for the most receiving yards in program history.

Spielman’s loss to the program can not be understated. In addition to being in the top 10 for receiving yards in the Big Ten in all three seasons, including a fourth-best in yards per receptions in 2019, Spielman has provided a dynamic threat on special teams with over 1000 kickoff and punt return yards with three touchdowns.

Despite his production and explosive playmaking ability, several scouts and analysts, including our own Tony Pauline, have him ranked as a solid sixth-round prospect.

Slightly surprising this late in the game. I gave Spielman a 6th/7th round grade off the film i recently viewed (Big Ten previews start next week). Scouts I've spoken with grade him as a solid 6th round prospect. https://t.co/KImtp19TfY

Although players should be graded on their ability alone and not as a product of their program, scout the player not the helmet, there is an inevitability that some preconceptions exist about a player’s ability to produce at the next level based on the program they came from.

Nebraska does not have a rich history of sending top wide receiver talent to the NFL.

Since the NFL Draft began, the Cornhuskers have had just 20 wide receivers selected. Irving Fryar (New England Patriots) and Johnny Rodgers (San Diego Chargers) are the only first-round selections out of Nebraska.

Incidentally, Spielman sits just 133 yards behind Rodgers in the list of receiving yards leaders for the program.

Spielman’s draft stock ahead of the 2020 season would put him in the same company as Nebraska’s most recent NFL Draft selections at wide receiver. Players like Kenny Bell (162nd overall), Quincy Enunwa (209th overall), and Niles Paul (155th overall).

That is presuming he is eligible to play in 2020.

Although the NCAA transfer regulations are in the processing of changing to allow players a one-time transfer without penalty, that rule won’t come into play until the 2021-22 college football season.

Currently, as Spielman isn’t a graduate transfer, he would have to sit out for a season unless he is granted an eligibility waiver from the NCAA. As players like Luke Ford will testify to, being granted an eligibility waiver isn’t an easy or guaranteed process. There is a greater chance that he won’t see the field in 2020 than that he can immediately play somewhere else.

Although that would appear detrimental to Spielman’s draft stock, it would take him out of a 2021 NFL Draft wide receiver class that may contend with the heralded 2020 class in terms of top-end talent and depth. Rather than being a sleeper in a deep ’21 class, he would be one of the more prominent names in the ’22 wide receiver class.

Of course, the biggest impact on Spielman’s draft stock from his transfer out of Nebraska will be his landing spot. His three years at Nebraska have been hampered by inconsistent quarterback play. Despite his contributions, the Huskers have had three straight losing seasons. To make the best of his potential, and improve his draft stock, Spielman needs to land on a successful program that can make the best of his ability.

There are two obvious choices.

Spielman arrived in Nebraska as Mr. Minnesota Football and the Minneapolis Star Tribune Metro Football Player of the Year. The Eden Praire native has rich family ties to the area, with father Rick Spielman being the current general manager of the Minnesota Vikings. JD has a previous relationship to the Minnesota Golden Gophers program, having participated in their 2015 camp. He held an offer from Minnesota before choosing to go to Nebraska.

With the Gophers losing Tyler Johnson to the NFL, Spielman would make the perfect replacement should he be eligible this fall. He would land in a spot with an ascendant quarterback in Tanner Morgan, who is set to be one of the best at the position in 2020. The combination of Spielman and Rashod Bateman would be delectable.

If he isn’t eligible this year, then he would be the de facto WR1 when Bateman presumably heads to the NFL as part of the ’21 wide receiver class.

There are also family ties to Ohio State. Rick went to high school in Ohio. JD’s uncle, Chris Spielman, was a two-time All-American linebacker for the Buckeyes. Ohio State has a young wide receiver room that would benefit from an experienced playmaker like Spielman. The Buckeyes would provide a winning program, and if he was to be eligible in 2020, a proven quarterback in Justin Fields.

There is also one dark horse destination that could impact Spielman’s draft stock.

Iowa State was the only program from outside the Big Ten to offer Spielman a scholarship when he came out of high school. The Cyclones had one of the most productive offenses in college football in 2019. Their spread offense would be perfect for Spielman’s skillset.

In Brock Purdy, Iowa State have one of the brightest young quarterbacks in the nation. Although they have an extremely highly rated tight end in Charlie Kolar, there is no standout WR1 in their receiver room. Spielman can fill that role perfectly and would terrorize defenses in the Big 12.

Players have found great success in recent years by using the transfer portal to enhance their draft stock. The last three number one overall selections in the NFL Draft have been quarterbacks that transformed their careers as a transfer.

Spielman won’t replicate that remarkable feat, but he can enhance his draft stock with his transfer away from Nebraska.