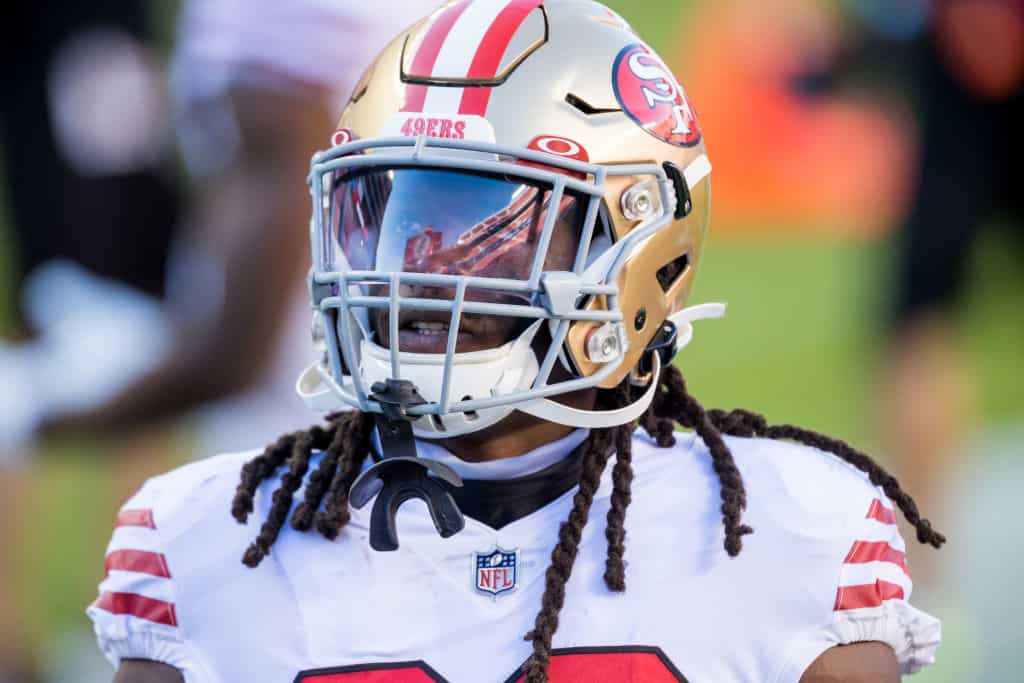 The San Francisco 49ers running backs have been frustrating from a fantasy football standpoint for the last few years. Head coach Kyle Shanahan never relies on a single back and prefers to spread things around among multiple players. It’s no shock, then, that they have a total of six running backs that have gotten carries through six weeks. However. the one who’s been the quietest might now be poised for a breakout. Is rookie running back JaMycal Hasty a fantasy stash candidate now that Raheem Mostert might miss some time?

JaMycal Hasty went undrafted in the 2020 NFL Draft back in April. I wrote about Hasty in July as a UDFA to keep an eye on for fantasy, specifically saying that he was “smaller but was terrific once he got the ball in space at Baylor and could be a great fit as a third-down back in the NFL.” Obviously, this kind of player fits in perfectly with the Shanahan offense who loves to throw short passes to players out of the backfield.

In terms of metrics, Hasty wasn’t a top prospect, but he definitely looked like a potential bench RB in the NFL. He had a Relative Athletic Score (RAS) of 6.72, meaning he was better than 67% of all running backs when they entered the league. He was ranked as the 19th best RB in RAS for the year, with good speed and elite explosion. Two more traits that fit in well with the 49ers offense.

So far this season, Hasty has played in four games, getting two carries for nine yards and a catch for nine yards in Week 3 against the Giants and nine carries for 37 yards in Week 6 against the Rams. It appears as if he’s gotten up to speed and the team wasn’t afraid to give him the ball after Mostert’s injury. But with all of the other options on the roster, can JaMycal Hasty be a fantasy starter for teams that need the help?

Thanks to his pass-catching volume, the top running back on the 49ers roster in terms of PPR scoring is Jerick McKinnon with 73.8 points. McKinnon has more touchdowns (3), receptions (17), and targets (25) than any of his teammates. McKinnon has a history of season-ending injuries, but thus far, he’s been fairly reliable and has played in all six games for the team. And at this point, he’s probably been a flex option for most fantasy managers since he’s at least been on the field week in and week out.

Related | NFL Power Rankings, Week 7: Teams moving up and down the board

Second in fantasy scoring on the team is Raheem Mostert with 68.3 PPR points. While McKinnon leads the team in TDs and receiving stats, Mostert is the leader in terms of carries (51) and rushing yards (303) even though he’s only played in four games this season. Mostert has been the bruiser between the tackles while McKinnon has been the main target out of the backfield. With Mostert now looking at missing some time due to an ankle injury, someone’s going to have to step up to fill that role. Could that be JaMycal Hasty for fantasy managers?

Third on the team in fantasy scoring is Jeff Wilson with 27.8 PPR points. He’s also missed two of the team’s six games, but his volume has been significantly lower as well. Wilson is currently suffering from a calf injury. While he may practice this week, odds are slim that he’ll be ready to be the next man up, at least in Week 7.

Last but not least in the cluttered San Francisco backfield is veteran Tevin Coleman. Before going on IR with a knee injury after Week 2, Coleman only put up 9.4 PPR points. The 49ers could activate Coleman ahead of their Week 7 matchup, but all signs are pointing to them taking it easy and waiting until Week 8 to put him back on the active roster.

All of this means that aside from McKinnon, the team with a plethora of running back options at the start of the season is looking strangely thin at the position for Week 7, which opens the door for rookie Hasty to make an immediate impact. Opportunity is only part of the game, though. What’s JaMycal Hasty’s fantasy outlook now that he will be getting an opportunity to produce in Week 7?

Due to the nature of the 49ers offense, it’s entirely possible for Hasty to see 10+ carries this week against the Patriots. So far this year, the Patriots are 21st in Defense Points Allowed Consistency (DPAC) to opposing running backs. This means that whoever takes the bulk of the carries will likely have their work cut out for them, but all it takes is one play to get loose for a long gain.

With so many RB heavy teams on a bye like the Colts and Jonathan Taylor, the Vikings with Dalvin Cook and Alexander Mattison, the Dolphins with Miles Gaskin and Matt Breida, and the Ravens with Mark Ingram and JK Dobbins, the RB landscape is looking pretty bleak this week. Even in deeper leagues, fantasy managers are likely going to have to hit the waivers to find that diamond in the rough, and JaMycal Hasty could easily be a fantasy darling.

The timing of his ascension, the injuries to his teammates, and the general wasteland that is the running back position in 2020 make for a perfect storm. Hasty should definitely be looked at as a viable flex option for anyone who is desperate this week, but should also be considered a terrific stash option for down the road as well. With his speed and explosion, JaMycal Hasty could be a fantasy league winner in a chaotic year filled with injuries and uncertainty. Add him with confidence and see how he does – you might be surprised.