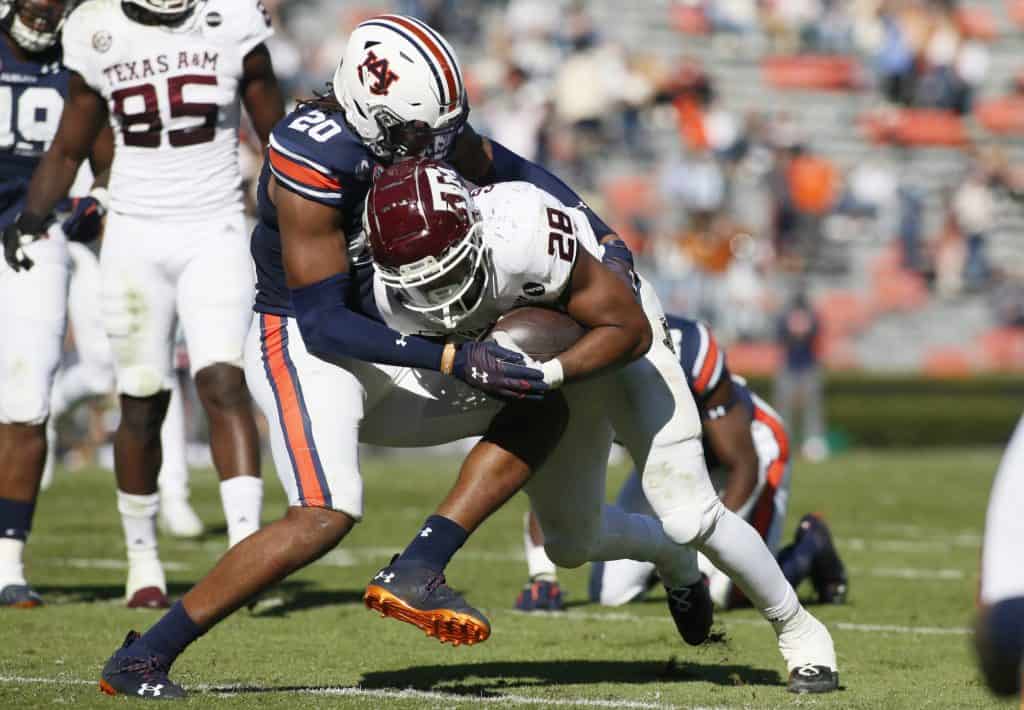 Versatility is a coveted asset on defense in today’s NFL, but at the same time, more work goes into evaluating players with projected versatility. What roles could they feasibly fill? What roles will be best for them? And just how much flexibility do they provide for a defense? In the NFL Draft prospect evaluation of Auburn safety Jamien Sherwood, these are all questions at the forefront of the mind.

Positives: Large, explosive safety with a physical game. Terrific run defender who is aggressive and takes on bigger opponents. Takes good angles to the action, attacks ball handlers, and works to finish plays. Athletic, has excellent length, and flashes ability in zone coverage when facing the action. Picks up coverage assignments in the middle of the field and works well with cornerbacks.

Negatives: Lacks next-level recovery speed. Slow transitioning with opponents in man coverage and does a lot of face guarding.

Analysis: Sherwood has the style, skill, and size to be used as a traditional strong safety or in a zone system. He has limitations in coverage but comes with an upside, and Sherwood plays with a special teams mentality.

Several states are particularly famous for their production of NFL-caliber athletes. Florida is one of them. Home of the famed IMG Academy, Florida consistently generates high-quality talent for the SEC and other conferences. Jamien Sherwood was one of those promising Florida prospects in 2018.

Hailing from Jensen Beach, Sherwood was a four-star safety recruit who’d been a consistent playmaker for his high school. He fielded offers from teams like Florida, Miami, Georgia, Oklahoma, and Michigan. Rather than pick one of those schools, however, Sherwood instead decided to sign with the Auburn Tigers. There, he’d be able to play within an immense pool of NFL talent.

Despite being a true freshman, Sherwood saw action on the defensive side of the ball for the Auburn Tigers in 2018. The Auburn safety managed to play in ten games. Over that span, he logged 22 total tackles, 1.5 tackles for loss, 1.5 sacks, an interception, and 2 pass deflections.

Sherwood remained a reserve defender in 2019. Nevertheless, his early production yielded a slight increase in his role as a true sophomore. Adding to the depth of a strong Auburn defense, Sherwood amassed 43 total tackles, 4.0 tackles for loss, 5 pass deflections, and a fumble recovery. Expectations were that Sherwood would start for the Tigers in 2020. He consequently entered the year as a third-team preseason All-SEC selection.

As expected, Sherwood became a full-time starter in 2020. Of course, he thrived in an expanded role. Across 11 games, Sherwood logged 75 total tackles, 3.0 tackles for loss, 1.0 sack, 3 pass deflections, and 2 fumble recoveries. He broke the ten-tackle mark in three games and solidified his reputation as a flexible, impactful player on defense for the Tigers.

Despite being only a true junior, Sherwood officially declared for the 2021 NFL Draft on January 16. The Auburn safety only adds to an extremely enticing safety class. But what kind of role does he project to have within the group?

The first thing that stands out on Jamien Sherwood’s tape is his athletic profile. Sherwood has impressive size at around 6-foot-2, 220 pounds, and he’s also incredibly long, given his height. His length makes him a consistent factor in pursuit situations. It also compounds his range in the box, where he does a great deal of his work.

Athletically, Sherwood also displays exceptional movement skills. Chief among those traits is his short-range explosiveness and twitch. Sherwood’s initial burst is impressive, and he’s also a fairly sudden, twitchy player in smaller areas. His short-range explosiveness allows him to close proportionally large gaps in the box, and he also has more than enough mobility to cover tight ends.

Furthermore, Sherwood has some fluidity in his hips. Vertically, he’s a little more stiff, but he has enough movement freedom to roam around and provide a safety blanket.

Sherwood has a solid athletic skill set, and he compounds it with nice discipline in the short and intermediate ranges. Some players pull the trigger too fast and take themselves out of plays. Sherwood, however, is very measured and patient with his play style.

This can detract from his overall pace at times, but he’s long, nimble, and instinctive, and he doesn’t sacrifice his positioning easily. He snuffs out wide receiver screens well and can earn tackles for loss with his ability to stay clean and pursue opponents. When he does pull the trigger, Sherwood comes downhill with intense urgency. Those kinds of players are valuable.

What are the concerns with Jamien Sherwood?

The extent of Sherwood’s athleticism remains a question. His positional designation is at safety for the time being. However, at Auburn, he often played in smaller ranges, where his job was to navigate congestion, and not to cover larger areas of the field. He wasn’t always required to turn and chase, and his top-end speed didn’t always inspire when he did.

His agility when turning his hips upfield also lacked consistency at times, and that raises concerns surrounding his ability to cover receivers in man coverage. Sherwood’s testing numbers only strengthened the calls for him to move to linebacker at the next level. He posted great explosiveness numbers — a 36-inch vertical and a 123-inch broad jump — but his 4.76 40-yard dash confirmed the doubts surrounding his long speed.

Sherwood has a great deal of versatility. That’s a huge plus. However, if Sherwood ultimately makes a switch to linebacker at the next level, he may need to add more weight to his frame. He has a solid frame already at almost 220 pounds, but there were times when he was moved easily when being blocked. His mobility and length allows him to stay in plays as a run defender. However, he needs more play strength if the box is where he’ll remain on a regular basis.

Beyond these notes, Jamien Sherwood is a solid NFL Draft prospect. The Auburn safety is multifaceted, and he’s also smart, reasonably athletic, and a sure tackler with his length.

His patience can lead to indecision at times, but he clearly has the capacity to play at a faster pace if an NFL coaching staff imbues him with added confidence. A large part of Sherwood’s NFL projection depends on how his team uses him, but as a weak-side linebacker, or a hybrid strong safety, he should have a bright future ahead.

The SEC’s defensive class of 2021 is incredibly deep. Because of this, we’ve seen a few players rise late in the process. Kelvin Joseph and Jamin Davis have gotten this treatment, and Jamien Sherwood is another who might not be overlooked much longer.

There aren’t many holes in Sherwood’s game, and although he’s not quite an elite athlete, he could potentially be a tremendous player in the right fit. Off of his tape, the Auburn safety looks like he could be a Day 2 pick. However, with the questions surrounding his projection, he could also potentially fall to Round 4 or Round 5.

Which teams might best benefit from Sherwood’s skill set?

The NFL Draft is unpredictable every year, and that statement holds true even more with “position-less” players like Sherwood. Nevertheless, for teams that value versatility and instincts in the box, Sherwood would be an excellent grab. He offers high potential on defense, but his traits are conducive to special teams’ production as well.

Teams like the Houston Texans, Las Vegas Raiders, Detroit Lions, and Los Angeles Chargers, stand out as potential fits for Sherwood, but his versatility makes him widely marketable. His most likely role figures to be as a strong safety with the versatility to man the slot and the box. We’ve seen those archetypes succeed out of the draft recently.

Having said that, Sherwood’s athletic profile perhaps best translates to weak-side linebacker, where his coverage ability against tight ends and running backs would be very valuable.

On one hand, it’s tough to project for players like Sherwood. On the other hand, there are endless possibilities to consider, and there isn’t as much of a concern regarding placing a square peg in a round hole. Sherwood’s versatility and innate feel provides him with appeal in multiple alignments, and it also provides him multiple avenues to success in the NFL.

Dive into PFN’s Free NFL Mock Draft Simulator and test your own drafting acumen. Continue to visit Pro Football Network for NFL news and in-depth analysis. Also, be sure to follow us on Twitter (@PFN365) to stay in the loop on all things college football and the NFL Draft landscape

Who is QB1 in the 2022 NFL Draft? What happens to Spencer Rattler now?