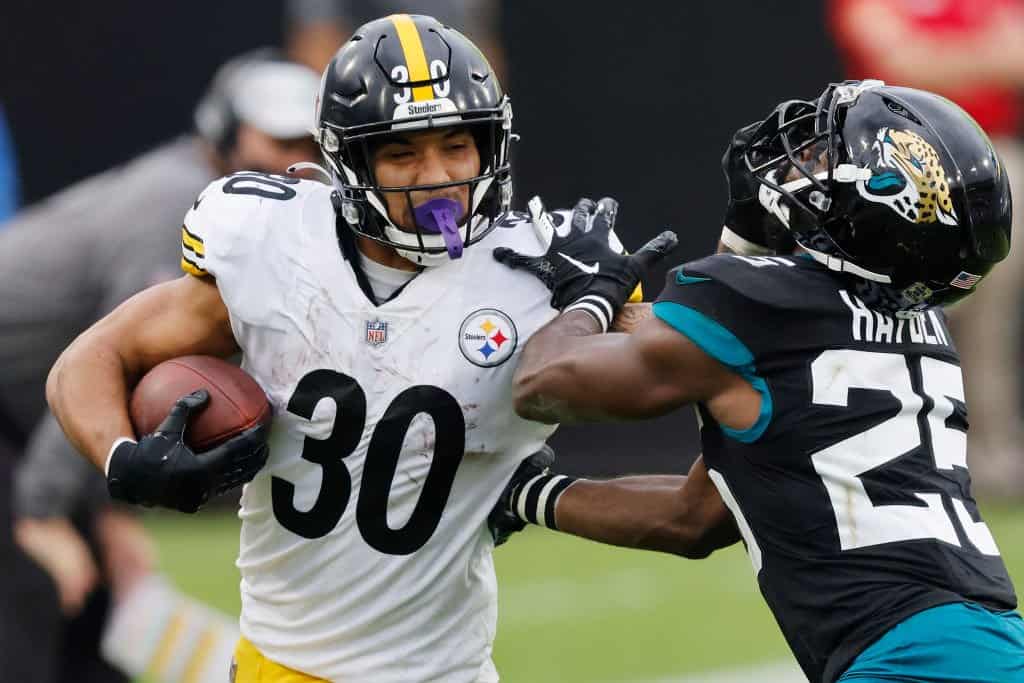 JACKSONVILLE, FLORIDA - NOVEMBER 22: James Conner #30 of the Pittsburgh Steelers stiff arms D.J. Hayden #25 of the Jacksonville Jaguars during the second half at TIAA Bank Field on November 22, 2020 in Jacksonville, Florida. (Photo by Michael Reaves/Getty Images)
What's in this article? Click to show
James Conner still has plenty to prove when he finds a new landing spot
Best landing spots for James Conner in free agency
Want more fantasy football analysis and news?

James Conner’s contract in Pittsburgh is up, and he could be on the move. He turns 26 years old in May and has a long list of injuries as well as overcoming stage 2 Hodgkin’s lymphoma in 2016.

That is obviously a miraculous story. Who is to say if Conner’s illness has anything at all to do with his inability to stay on the field? Nevertheless, his durability and reliability have been Conner’s biggest negatives as a pro.

He is a power back that lacks special movement traits but also shouldn’t be considered a heavy-footed plodder, either. Conner has come a long way as a receiver and in protection. He can be used in all situations but also isn’t quite as dynamic as you would like, particularly in long down-and-distance situations.

Conner’s career has been up and down so far

In Conner’s four regular seasons in Pittsburgh, he has appeared in 50 of a possible 64 games and has averaged 4.3 yards per carry. His best season came in 2018 when he scored 12 rushing touchdowns and ran for 973 yards despite missing three games. Conner also caught 55 passes and averaged 9 yards per reception in 2018.

In the past two years, Conner has caught 34 and 35 passes, respectively. For his career, Conner averages just over 46 rushing yards and 19 receiving yards per game played. In addition, he scores a touchdown on average in about half of his games played.

Conner still has value on the NFL landscape. However, it is highly unlikely that he will receive a huge payday or be considered a team’s lead back. As fantasy managers, the best we can hope for is Conner landing in a quality committee or as a true handcuff in a good situation.

Could James Conner return to the Pittsburgh Steelers in free agency?

A return to Pittsburgh isn’t out of the question for Conner. After all, he’s from the area and played his college ball at Pitt. The Pittsburgh Steelers’ new offensive coordinator, Matt Canada, also coached Conner in college.

If Conner remains in Pittsburgh, it would probably be after he tests the free-agent market. Assuming he doesn’t get an offer to his liking, he may subsequently sign a short-term deal with his old team. Still, the Steelers would almost assuredly add another back of note, and Conner wouldn’t even be guaranteed a true starting spot.

Much like the situation in Pittsburgh, the Seahawks might have interest in Conner if Chris Carson leaves town. Yet, Seattle would also take the likely approach of making Conner a backup to a rookie or part of some sort of committee. Still, this wouldn’t be such a bad situation for Conner’s fantasy stock.

Buffalo might make some sense as a Conner landing spot. They need to develop their run game more, and Conner has some similarities to Zack Moss. Thus, he could battle Moss and Devin Singletary for touches. It isn’t too far-fetched to think Conner would emerge from that competition as Buffalo’s top RB in a great offense.

The Bears might make some sense. Conner could act as David Montgomery’s direct backup, and there are some similarities in style there. Conner’s style fits what the Bears historically look for at the position as well as playing in that area of the country.

While the area of the country couldn’t be any more different than Pittsburgh, Conner could have a similar role with the Jaguars behind James Robinson. Jacksonville has a lot of money to spend. Additionally, Conner would be great insurance and could help Trevor Lawrence’s transition to the NFL. Having a quality running back can give a young quarterback a great sense of security.

For that same reason, maybe the Dolphins or the Jets would be interested in Conner. Both of these AFC East teams likely would prefer to add a higher-end prospect or player rather than Conner. Both teams have plenty of cap space and draft capital to do so. However, he might be a reasonable fallback plan.

Considering who is currently on both rosters at the RB position, Conner could quickly challenge for playing time in either Miami or New York if they don’t add a big-name back.

A landing spot that is intriguing for Conner is in New York with the Giants as Saquon Barkley’s handcuff. That offense has a chance to be better next year, and Barkley has a bit of an injury history in his own right. Conner would be an automatic fantasy starter any time Barkley was unable to play.

Be sure to follow us on Twitter: @PFN365 to stay up to date with all things around the NFL and the 2021 fantasy football season. Also, continue to visit Pro Football Network for NFL news and in-depth analysis while again seeing our fantasy football section for more coverage and up-to-date rankings.

In this article:Featured, James Conner