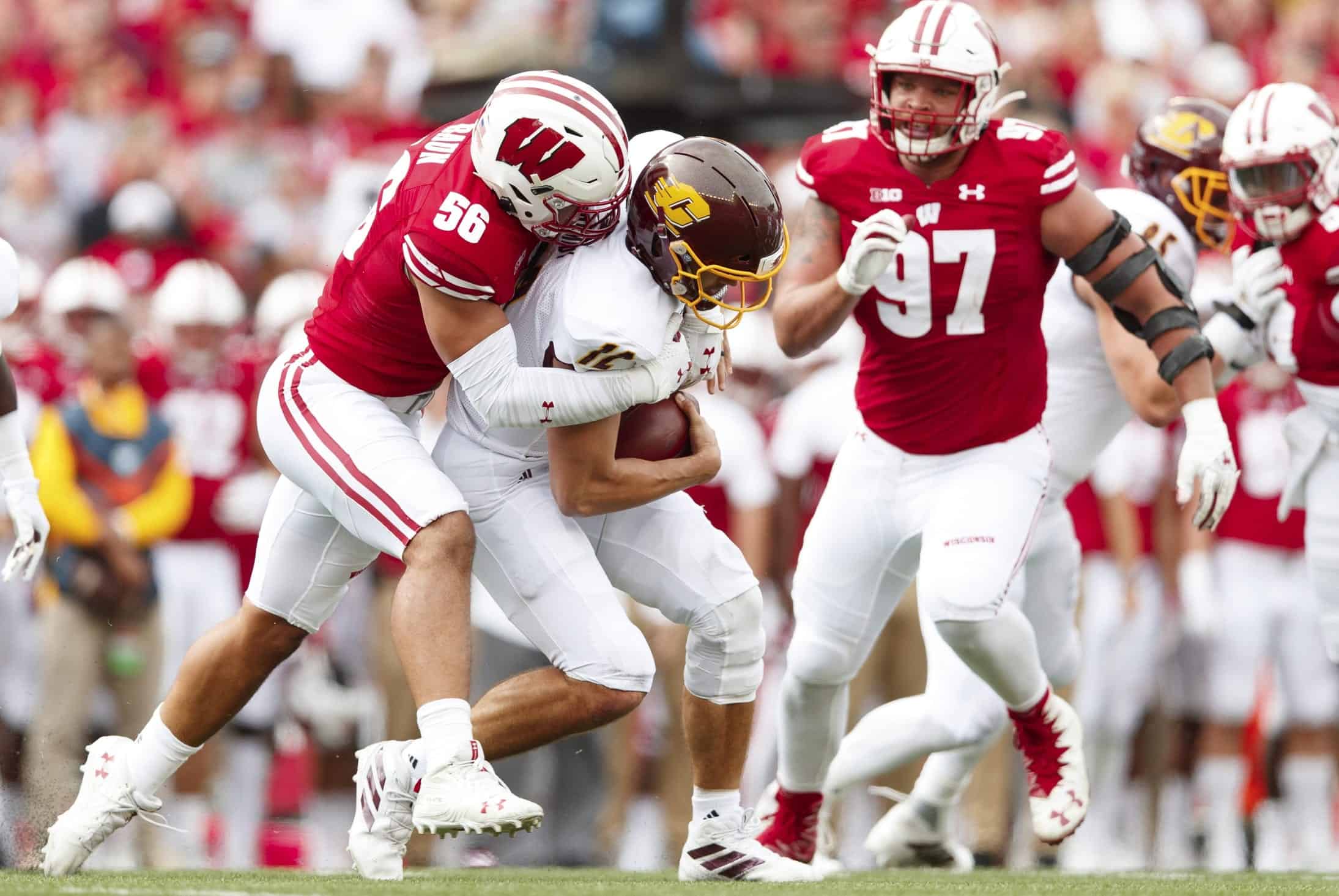 If there is one thing we associate with Wisconsin football it is power. While a powerful running game is what immediately springs to mind, it is not just the offensive side of the ball that stands out. The Badgers also have excellent players on the defense as well. Just look at the upcoming NFL Draft as a prime example. Outside linebacker Zack Baun could very well hear his name called in the first round thanks to his strong play and pass-rushing ability. However, with Baun gone, the Badgers will need another defensive lineman to step up in 2020. One player who could be primed to do that is Isaiahh Loudermilk.

While Loudermilk may not be in consideration as a first-rounder right now, he has the power and the ability to begin carving a name for himself as we begin to enter the 2021 NFL Draft cycle. Let’s take a look at the Badgers lineman and what we can take from his game at this point.

Loudermilk is a Kansas-born kid and was a three-star prospect out of West Elk High School. He was a four-sport athlete, and he was also an All-State basketball player as a junior, where he averaged almost 20 points, 15 rebounds, and 5.5 blocks per game. Loudermilk also played baseball and track and field in high school, claiming the conference championship in the shot put as a junior.

On the football field, he recorded 97 tackles as a senior along with two sacks and two interceptions, earning him first-team All-State as a senior.

In college, Loudermilk redshirted as a freshman in 2016, then earned his first varsity letter in 2017. He played in 11 games, missing three due to injury. He posted 11 tackles, 1.5 tackles for a loss, and 1.5 sacks. In 2018, Loudermilk played in nine games with six starts and recorded 15 tackles, 2.5 for a loss, and one sack. He even broke up three passes, which is a strong return for a defensive lineman.

He finally got to play every game for Wisconsin in 2019, 14 in total, and posted career-highs in tackles (24), tackles for a loss (5), sacks (3) and passes defended (5). He also added two forced fumbles and a block to his resume. All of those numbers came after he dealt with a left arm injury during summer camp, so it was good to see him get past the injury and be able to play every game for the Badgers.

When watching these Wisconsin defensive tackles, one thing to keep in mind is the defense the Badgers are running. They’ll mix between a 3-4 front and having two down linemen in sub-packages with the outside linebackers on the edge. That means that Wisconsin mixes up their defensive fronts and how their linemen attack, working both in one-gap and in two-gap.

Loudermilk has a good burst off of the snap and does well at working his hands inside against either the guard or the tackle. He has shown an ability to be moved between a 2i-technique and a 4i-technique and be effective from both spots. On top of that, he will also line up in the 3-technique at times.

Loudermilk is reasonably stout against the run. If he is two-gapping, he can stalemate the offensive lineman (or linemen if he is double-teamed) and allow his linebackers to have a cleaner field to do their work. It’s the classic defensive lineman doing the dirty work for the linebackers to take the glory. If he is one-gapping, he does a good job attacking his gap and taking away a running lane for the ball-carrier.

Breaking down Loudmilker’s strengths and weaknesses

One thing that he needs to improve on is shedding his blockers quicker. Generally, defensive tackles aren’t going to make a lot of tackles, but it would be beneficial for him to disengage from his block more and find the football.

A strength of his is getting down the line of scrimmage, reading his keys and getting a feel for the flow of where the football is going on a run play. He’s also demonstrated an ability to help collapse the pocket and get pressure on the quarterback in passing situations. Not an easy feat in a scheme like Wisconsin’s.

One thing that needs to be considered when discussing Loudermilk, are the injuries that he has had, and how they have impacted his play on the field. You can tell from the tape that he was hampered by his knee and leg injuries in 2018, and he was just getting over his arm injury when the 2019 season started. Even with his injury history in mind, the early indications are that Loudermilk has the ability to develop into a really good defensive lineman.

In 2020, Loudermilk will get the opportunity to be one of the anchors of a Wisconsin front seven that will be loaded with seniors. He’ll be one of the intriguing names to watch in the Big Ten and has the chance to climb up draft boards for the 2021 NFL Draft.

Bill Riccette is an NFL Draft writer for Pro Football Network. You can follow him on Twitter @Bill_Riccette.