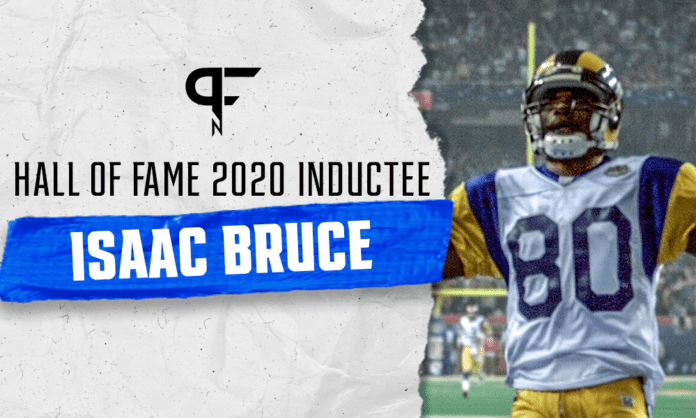 As Isaac Bruce is inducted into the Hall of Fame, let's look back at his career, stats, career highlights, and net worth.

Part of the “Greatest Show on Turf,” Isaac Bruce’s Hall of Fame career spanned 16 seasons with impressive numbers across 223 games. Let’s look at Bruce’s career, stats, career highlights, and net worth at the end of his football career.

Having been born in Fort Lauderdale in November of 1972, Bruce was an All-County selection at Dillard High School. His path to a major collegiate program involved stops at West Los Angeles College and Santa Monica College before transferring to Memphis.

In his two years with the Tigers, Bruce posted 1,586 yards and 15 touchdowns on 113 receptions. His 1,054 receiving yards in 1993 was the first 1,000-yard season in program history. He was selected 33rd overall as the sixth receiver off the board in the 1994 NFL Draft by the Los Angeles Rams.

Interestingly, two other key members of the “Greatest Show on Turf” and fellow Hall of Famers, Marshall Faulk and Kurt Warner, also entered the league that offseason. Faulk was selected second overall by the Indianapolis Colts, and the Green Bay Packers signed Warner as an undrafted free agent.

Bruce made a fast start to his career in the NFL

While he only generated 21 receptions and 272 receiving yards as a rookie, Bruce was named Rams Rookie of the Year. However, it was his second campaign where he really flashed his potential. Bruce was targeted 199 times, pulling in 119 receptions for 1,781 yards and 13 touchdowns. Amazingly, none of those were league-high numbers.

In Year 3, Bruce led the league in receiving yards with 1,338. Yet, he struggled with injuries the next two seasons, playing just 17 games. Still, he managed to post 1,272 receiving yards and 6 touchdowns during that span.

While Bruce would never hit the peak of 3,000+ receiving yards in a two-season stretch again, his 1999 season marked the sixth time he topped 1,000 yards in eight years. During that period, the Rams went to the playoffs five times and the Super Bowl twice.

Bruce’s contribution helped make the St. Louis offense one of the best we have ever seen. The Rams ranked first in points scored and yards gained from 1999 to 2001. That included the 2000 season, of which Bruce was part of a group named Pro Football Network’s greatest receiving corps of all time.

Bruce was also an essential part of the Rams’ Super Bowl-winning team in 1999. In the victory over the Titans, Bruce recorded 6 receptions on 12 targets for 162 yards and a score. That was the second time in three playoff games where he topped 100 receiving yards and scored a touchdown.

Bruce played a total of 16 years in the NFL, compiling the majority of his stats in a Rams uniform. He finished with a total of 1,024 receptions on 1,770 targets in 223 games. On those receptions, Bruce posted 15,208 receiving yards and 91 touchdowns.

In 2005, when Jerry Rice retired, Bruce became the active leader in receiving yards. Nevertheless, by the end of that year, Marvin Harrison passed him. Bruce then later retook that title in Week 15 of the 2007 season.

Stats with the Rams

Bruce played one season with the Rams in Los Angeles before moving with the team to St. Louis. During his 14 years with the franchise, he accumulated 14,109 receiving yards and 84 touchdowns on 942 receptions.

What are Bruce’s career highlights?

Bruce’s net worth in 2021 varies depending on the source, but the predominant estimate is $16 million. Bruce’s net worth is heavily influenced by the 12 years that have elapsed since his career finished. Let’s take a look at how much Bruce earned while he was playing in the NFL.

After being drafted at the top of the second round, Bruce signed a three-year contract worth $1.75 million. In the middle of a strong 1996 campaign, Bruce and the Rams agreed to a four-year, $12.1 million contract extension.

As Bruce was set to play his final season as a Ram in 2000, they agreed to a further extension. This time, Bruce agreed to a seven-year deal worth $42 million. Thus, Bruce was under contract through the 2007 season. Yet, the Rams released him prior to the 2006 season, saving $1.5 million that was due in signing bonuses. Bruce wasn’t gone long, as the Rams signed him to a three-year, $15 million contract just five days later.

Bruce was released ahead of the final year of that contract. He would go on to sign a two-year, $6 million contract with the San Francisco 49ers. Bruce’s four contracts were worth a total of $76.85 million. However, he would earn slightly less than that due to having two contracts terminated ahead of their full term.