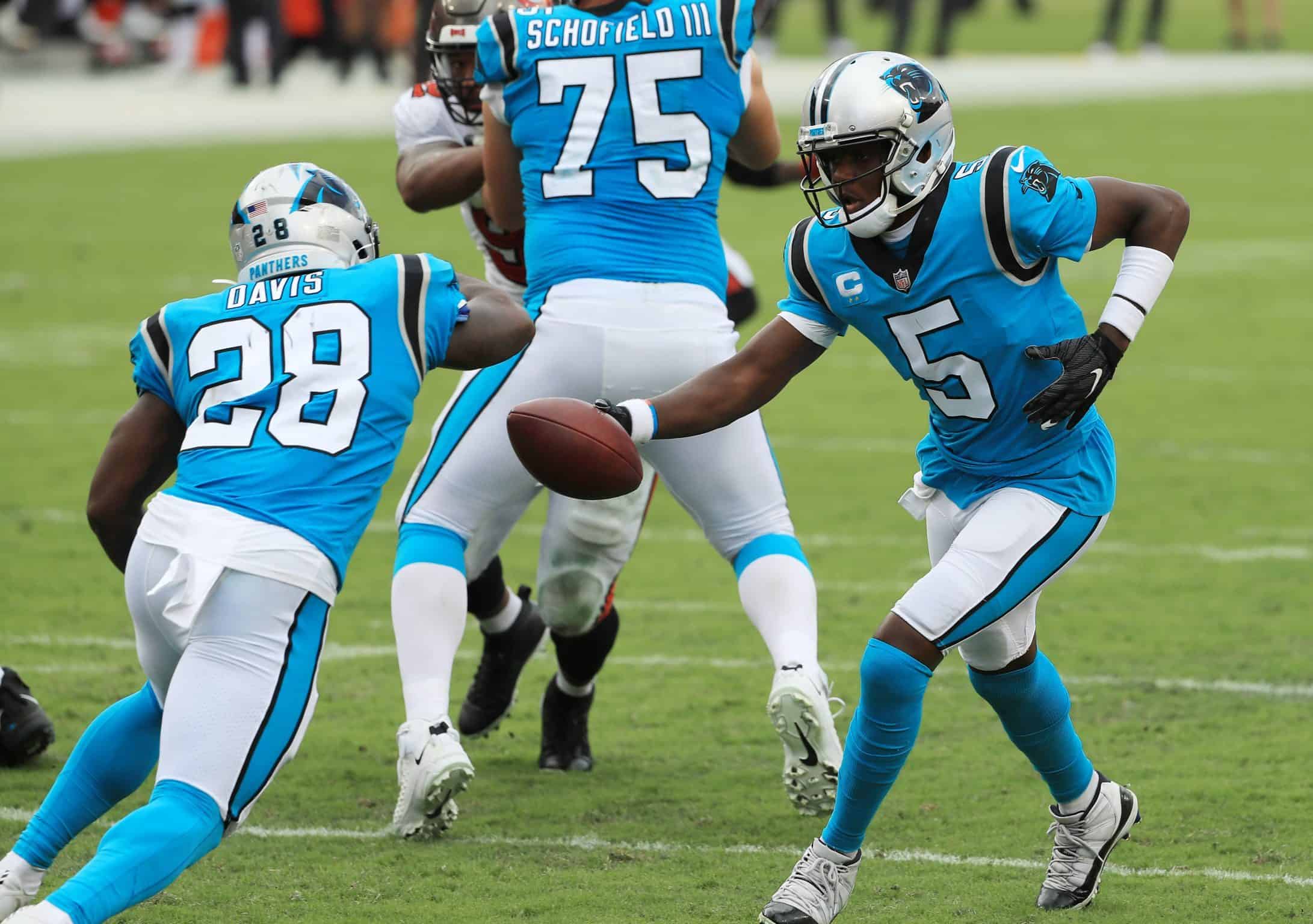 TAMPA, FLORIDA - SEPTEMBER 20: Teddy Bridgewater #5 of the Carolina Panthers looks to hand off the ball to Mike Davis #28 during the second half against the Tampa Bay Buccaneers at Raymond James Stadium on September 20, 2020 in Tampa, Florida. (Photo by Mike Ehrmann/Getty Images)
What's in this article? Click to show
Mike Davis showed his receiving ability when filling in for McCaffrey on Sunday
The coaches and fellow players expressed belief in Mike Davis following the game
Davis needs to be a waiver wire priority for fantasy football

Brutal. That is the only word that comes to mind when reflecting on Week 2 and the number of team-altering injuries we saw. It felt like no team was safe, including the Carolina Panthers, who received word on Monday that superstar running back Christian McCaffrey will miss 4-6 weeks with a high ankle sprain. With McCaffrey sidelined for the first time in his career, all eyes are on RB Mike Davis to step up as the focal point of the Panther’s offense. Can Davis become relevant in fantasy football?

McCaffrey will miss between four and six weeks with his high ankle sprain. In the meantime, Davis is set to be the lead back so long as the team doesn’t go shopping on the free-agent market. Does that mean fantasy managers need to make acquiring Davis a priority?

While the receiving part of his game looked solid, it’s the rushing that left a lot to be desired. Davis caught all eight of his targets for 74 yards and ran only one time for one yard. Unless Davis can find some of the form he had in his other stops in the NFL, the Panther’s success will be solely on Teddy Bridgewater‘s ability to carry the offense.

His most productive NFL season came the next year when, primarily as a backup, he rushed for 514 yards and four touchdowns and caught 34 passes for 214 yards and a touchdown.

New coach Matt Rhule has been high on Davis, though, saying the 2015 fourth-round pick out of South Carolina had one of the best training camps of anybody.

“We know he is a good player,” Rhule said of Davis. “I thought he caught the ball and turned up and made some good plays. It looked like he blocked well. He missed one on the one sack, but he was a threat coming out of the backfield.”

Comments like this are what you would expect out of your head coach and quarterback. Teams and players are not allowed to feel sorry for themselves, and there is the overarching “Next Man Up” philosophy that has been drilled into everyone who is a part of the team. However, no one is naive enough to think that Davis will step in, and there will be no regression.

McCaffrey last season became the third player in NFL history to record 1,000 yards rushing and receiving in the same season and is arguably the best dual-threat back in the league. There’s a reason the Panthers made him the highest-paid running back in the league. Given the comments, it does seem the team is confident in Davis’s ability to handle the workload that will be asked. If this is true, then Davis instantly gains fantasy value.

Could the Panthers look outside the team instead of relying on Mike Davis?

The short answer is yes. There are some notable running backs who have yet to sign with a team. Devonta Freeman is the one that first comes to mind and has already been linked to several teams since the season began. If the Panthers want to explore this option, they need to act quickly as the New York Giants search for a replacement after losing Saquon Barkley for the season with a torn ACL.

All signs point to the team choosing to wait out the timeline for McCaffrey to return and utilize the talent that is on the team currently. Davis will be the focal back and get rest while Trenton Cannon sees some snaps. I also expect the team to promote Reggie Bonnafon from the practice squad. Bonnafon was the primary backup behind McCaffrey while Ron Rivera was the head coach of the Panthers.

Davis needs to be a waiver wire priority for fantasy football

From a fantasy perspective, Davis needs to be at the top of the list for fantasy managers. Following a brutal week where the narrative will impact injuries, managers will be scrambling to find replacements that can return tangible value. Davis, as the lead back for the Panthers, will likely be a weekly mid-level RB2 in PPR formats due to his pass-catching ability.

If Freeman were to end up signing with Carolina, then the apparent pivot would be for him as he is the more talented player and would be behind a better offensive line than what the New York Giants have. Freeman going to New York presents a longer-term solution for fantasy football as Barkley will not return this year.

Whoever the Panthers choose to run with has a limited playability window because once McCaffrey is healthy, he will play on 97% of their offensive snaps like normal. Fantasy football managers will need to decide between short-term and long-term results with their top waiver claim this week.