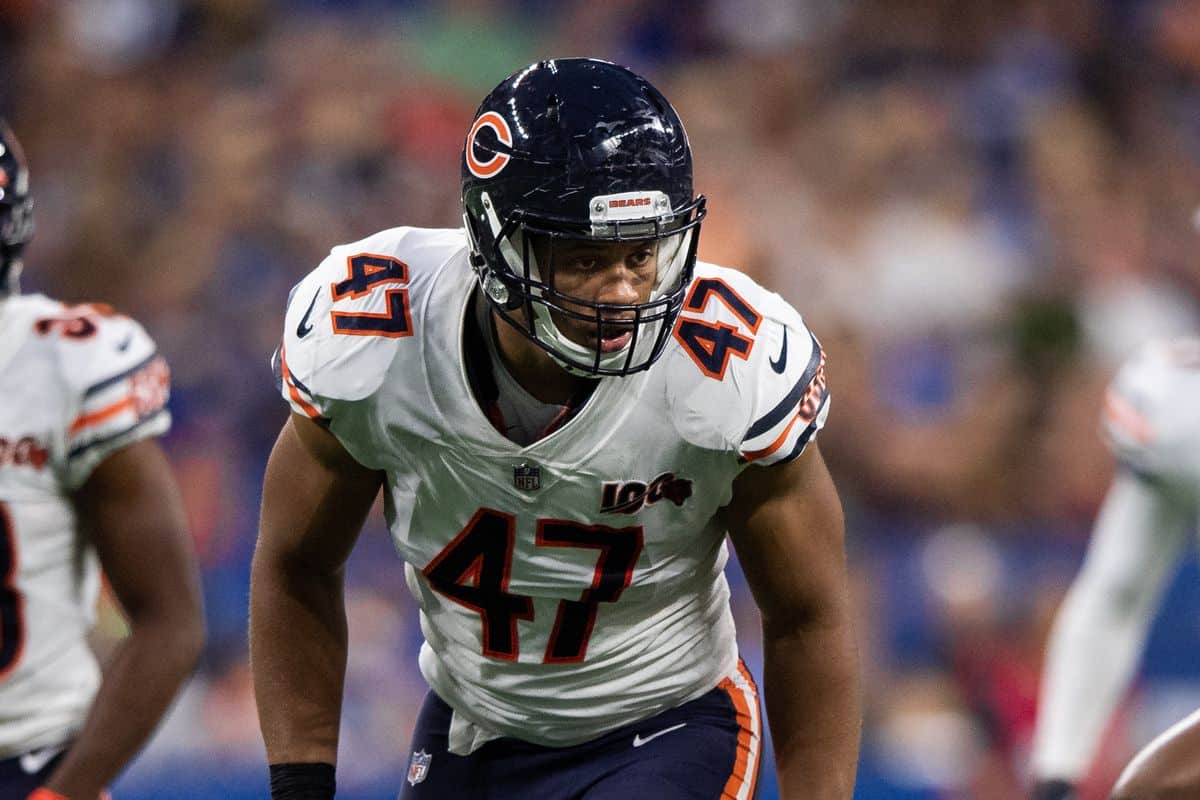 Photo by Zach Bolinger/Icon Sportswire via Getty Images
What's in this article? Click to show
How will Isaiah Irving impact the Broncos depth at outside linebacker?
Irving’s prior history with Vic Fangio could help him contribute in Denver
What are the expectations for Irving as a Denver Bronco?

After Von Miller’s season-ending injury, the Denver Broncos needed to focus their efforts towards addressing the depth at the outside linebacker position. With three total players at the position, the Broncos head coach Vic Fangio decided to go with familiarity during an uncertain time. Therefore, the Broncos brought in Isaiah Irving in order to add more depth to the position ahead of Monday’s season-opener against the Tennessee Titans.

How will Isaiah Irving impact the Broncos depth at outside linebacker?

Irving finds himself in a unique position entering the Broncos locker room. With Miller out for the season, and both Jeremiah Attaochu and Malik Reed ahead of him on the depth chart, the initial expectation is for Irving to be on the team’s practice squad, learn and re-familiarize himself with Fangio’s playbook before he sees any time contributing on the field.

As the Broncos prepare for the Titans, both Reed and Attaochu are expected to receive a bulk of the reps alongside Bradley Chubb who may or may not be on a pitch count according to Fangio.

Related | Which players will step up after Von Miller’s ankle injury?

“It’ll be [OLBs] Jerry [Attaochu] and Malik [Reed]. They’ll share it. That’s what happened last year when [OLB] Bradley [Chubb] went out. It’ll be those two guys primarily getting the share of snaps. Who ends up starting, who ends up playing in what packages will be fluid, but it’ll be those two guys. I wouldn’t say it’ll be one guy.”

Our PFN Insider Benjamin Allbright suggested on Tuesday evening following Miller’s injury that the “Broncos will look at depth OLB options. One name to keep an eye on is former Bears OLB Isaiah Irving. 6’3 255 lbs.”

The Broncos will face a stiff test on Monday against the Titans as they focus on attempting to stop Derrick Henry, who the Broncos held to 28 yards rushing on 15 carries last season. For Denver, they will attempt to establish a formula for a strong rushing defense without their franchise player in Miller.

Irving’s journey so far in his young career can be summarized by growing pains. Undrafted out of San Jose State, Irving found himself onto the Bears roster in 2017 where he appeared in seven games. Carving out a role for himself on special teams eventually led to him seeing some defensive reps on the field.

At the time, Fangio was the Bear’s defensive coordinator who had Ed Donatell on staff, the current Broncos defensive coordinator. Irving sat in the defensive meetings with his position group and had opportunities to soak up the terminology in Fangio’s 3-4 defensive scheme. In 2018, Irving was able to see time on the field as a key depth player for Fangio’s defense.

Irving was able to register eight tackles and one sack in 2018 while appearing in 13 games for the Bears. Following the conclusion of the 2018 season, Fangio became the head coach for the Broncos and Chuck Pagano took over as the defensive coordinator in Chicago. Irving appeared once again in 13 games for the Bears and was able to contribute 14 tackles defensively before injuring his quadriceps muscle.

What are the expectations for Irving as a Denver Bronco?

Irving isn’t expected to have a significant role with the Broncos beyond the scope of his previous work with the Bears. He’ll more than likely be a depth piece that could play a role for the Broncos on special teams with Reed and Attaochu seeing more valuable minutes defensively. From time to time, you can expect to see Irving on the field for some defensive snaps, but his total snap utilization will likely be low as Chubb continues to get acclimated to being on the field more, post-injury.

Expectations should also be viewed under the lens of caution as well, considering Irving was recently waived by the Bears with an injury settlement. He may still need some more time to get into competitive football shape before he can impact the Broncos in any way. Ultimately, the addition of Isaiah Irving will be a move that will not have an immediate impact in replacing Miller but could pay off for the Broncos down the stretch of the 2020 season.