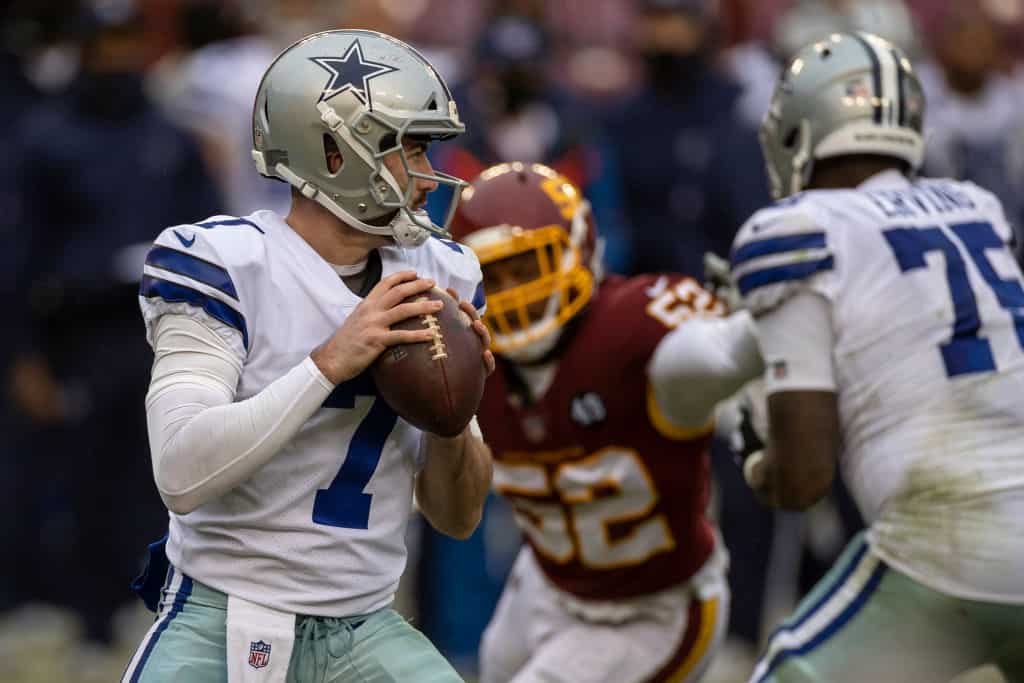 LANDOVER, MD - OCTOBER 25: Ben DiNucci #7 of the Dallas Cowboys looks to pass against the Washington Football Team during the second half at FedExField on October 25, 2020 in Landover, Maryland. (Photo by Scott Taetsch/Getty Images)
What's in this article? Click to show
After losing Prescott and potentially Dalton, Ben DiNucci will become the Cowboys starting QB
How will Cowboys QB Ben DiNucci impact the fantasy value of Amari Cooper and CeeDee Lamb?
What has happened to Michael Gallup this year?
Want more fantasy football analysis and news?

I don’t know if there has ever been a gunslinger in the state of Texas with the name DiNucci before, but we can cross that off the 2020 bingo card. The Dallas Cowboys had big plans for the 2020 season – none of which involved Ben DiNucci. Yet, after losing both Dak Prescott and potentially Andy Dalton, we are left to wonder how Cowboys QB Ben DiNucci will impact fantasy football players like Amari Cooper, CeeDee Lamb, and Michael Gallup.

The former Pitt and James Madison product now sits at the helm of one of the most disappointing teams in the NFL. Full of talent and a new coaching staff, the Cowboys seemed to be destined to make a run for the playoffs. They were arguably one of the teams that had the most fantasy potential on their roster. Now, all of those managers are left scratching their heads, wondering how much their investment depreciated or if it is time to work a trade before it is too late.

That’s how long it took to derail the organization completely. Just two weeks after Dak Prescott suffered a gruesome season-ending ankle injury, backup Cowboys QB Andy Dalton was knocked out of Sunday’s game against Washington with a concussion after a vicious helmet-to-helmet hit by Jon Bostic, for which Bostic was ejected.

In steps rookie Cowboys QB Ben DiNucci to take over the reins.

The Cowboys selected DiNucci in the seventh round of the 2020 NFL Draft, No. 231 overall. DiNucci was drafted out of James Madison, where he played his final two college seasons after initially playing at the University of Pittsburgh.

While it is not a guarantee that DiNucci will start next week, it seems highly unlikely that Dalton will be cleared from the NFL’s concussion protocol in time for Week 8’s game against the Philadelphia Eagles. DiNucci appears ready to take on the challenge.

“This team drafted me for a reason. Coach McCarthy brought me here for a reason. If my number is called in the future, I’m going to make sure and do everything I can to keep this show on the road and show the other guys in the locker room they can have as much faith in me as No. 4 and No. 14.”

Being confident is one thing; production is a different story. Going from Prescott, who had thrown for over 400 passing yards in three of their first four games, to a seventh-round pick from JMU, is a massive regression for fantasy value and expectations. Amari Cooper was starting to look like a consistent player for once, and CeeDee Lamb was vaulting into the top seven discussion for wide receivers in dynasty rankings, leaving Michael Gallup the sole underperformer of the bunch.

Let’s take a look at their fantasy value in the post-Dak era; how much has changed from then, and what can we expect moving forward, at least until Dalton is back with the team?

How will Cowboys QB Ben DiNucci impact the fantasy value of Amari Cooper and CeeDee Lamb?

It’s not going to help anything, that is for sure, as the Cowboys’ issues stem further than just who is throwing the ball. The Cowboys are making their case to be the worst team in the NFL right now. And I don’t say that from a talent perspective; in fact, on offense, they are one of the most talented rosters in football.

I say this from a preparation standpoint, and when they step onto the field, nearly every other opponent is more prepared to win the game than they are. HC Mike McCarthy and DC Mike Nolan are getting lit up by “anonymous players” in the media, and nothing seems to be working for the 2-5 Cowboys.

The lone bright spot this year has been the play of Amari Copper and CeeDee Lamb, especially in terms of fantasy.

Even last week, Amari Cooper had a solid day for fantasy, finishing with 15.5 PPR points thanks to a seven reception for 80 yards day. The downside is that all but two of his seven targets came from Andy Dalton, not the current Cowboys QB Ben DiNucci.

Amari Cooper was the only benefactor in a terrible Cowboys offense

Amari Cooper was a rare bright spot on the day as his team managed to generate 114 passing yards. Cooper has caught 14 of 17 targets for 159 yards over the last two games since Prescott (ankle) went down, but his production seems unlikely to continue next Sunday night against the Eagles if Dalton is forced to miss the contest. With DiNucci under center, Cooper will remain a volume-based WR2, but the floor drops to the single-digits on his potential outcomes.

The most frustrating of the two players regarding what the change at QB could do to their fantasy value is WR CeeDee Lamb. There is a legitimate argument going that Lamb was a top-seven (at least) wide receiver in dynasty if you did a startup draft right now. However, after this week, that momentum might have stalled a bit.

Lamb failed to catch any of his five targets and gained one yard on his lone rushing attempt during Sunday’s 25-3 loss to Washington.

CeeDee Lamb couldn’t bring in any passes from Dalton and hardly stood a chance on any of the looks DiNucci sent his way after entering the game. He had at least five receptions and seven targets in every game entering this contest, so the goose egg was a large departure from what fantasy managers had come to expect.

If Dalton is forced to miss Sunday’s matchup against the Eagles, Lamb’s fantasy outlook with Ben DiNucci under center is questionable at best, even against a struggling Philadelphia secondary. I don’t know if Lamb could be trusted as a starting option at this point, and his fantasy value will take a massive hit until Dalton can return.

What has happened to Michael Gallup this year?

Michael Gallup is on the shortlist of the most disappointing fantasy players of 2020.

Outside of his Week 3 blowup performance, Gallup has yet to go over 75 yards receiving and has scored double-digit fantasy points only once. Thought by many to be the player to take the next step and become the Cowboys fantasy WR1, Gallup has been a complete disappointment and someone who is being dropped for bye week fill-ins. His struggles continued on Sunday.

After totaling fewer than 30 yards receiving in two of his previous three games entering Sunday, Gallup was held without a catch in a blowout loss to Washington. Gallup was targeted twice but couldn’t come down with either pass.

Michael Gallup thrives on the downfield passing game, but if the OL can’t block anyone long enough for him to get 15 or more yards downfield, it doesn’t really matter much who is under center. I don’t know if the move to DiNucci impacts Michael Gallup’s fantasy value very much because it is at the lowest we have seen in over a year. He is a lower-end WR4 that can’t be trusted in your starting lineup.