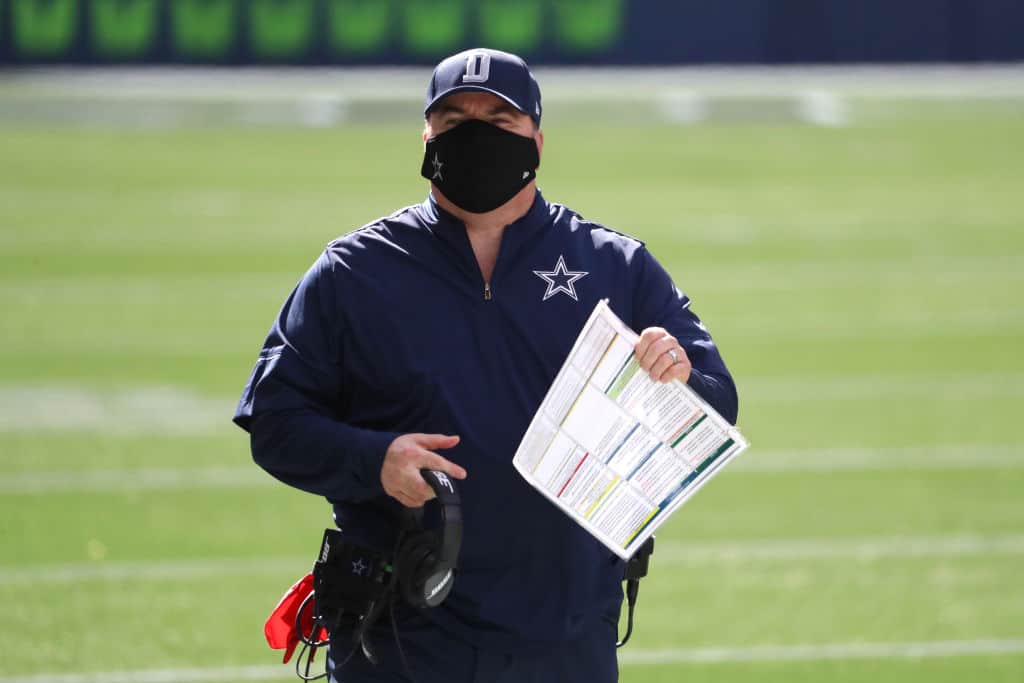 Dallas Cowboys head coach Mike McCarthy and/or his coaching staff could be one-and-done in Dallas. On Tuesday’s PFN Weekly digital show, Pro Football Network Insider Benjamin Allbright mentioned that he’s been hearing rumors that the Cowboys coaching staff is starting to lose the locker room and that it might force Jerry Jones’ hand at the end of the season.

“The new Cowboys coaching staff might be one-and-done in Dallas,” said Allbright. “The rumor is that they are losing the locker room out there, and they’re going to have to turn it around pretty quick. The players don’t feel the coaches are detail-oriented enough,” sources told Allbright.

However, Allbright noted that while Mike McCarthy may be safe even if the Cowboys continue on their current path, it would come with certain conditions. Jerry Jones – who has not been afraid to pull the plug early on coaches prior to Jason Garrett’s long tenure – may force him to fire some or all of the coaching staff.

Note: PFN Weekly is embedded at the end of this article and Allbright talks about McCarthy toward the end of the show. Scroll down to view the segment, which begins around the 41:44 mark.

According to NFL Network’s Jane Slater, Cowboys players who initially bought into this new coaching staff’s scheme and plan, have now had a change of heart.

One player told Slater that the coaching staff is, “totally unprepared,” and that, “they don’t teach. They don’t have any sense of adjusting on the fly.” Another player said, “they just aren’t good at their jobs.”

If that is the case, McCarthy might have less time than expected to try and turn things around after a rough start. But, how did we even get here in the first place?

From Green Bay to Dallas, how did McCarthy become the new head coach of the Cowboys?

Before coming to the Dallas Cowboys, Mike McCarthy was the head coach of the Green Bay Packers from 2006 to 2018 after spells as the offensive coordinator of the San Francisco 49ers and New Orleans Saints. While he won a Super Bowl with the Packers, the questions about whether he underachieved never seemed to go away.

Featured | Why are the Dolphins giving Tua Tagovailoa his first NFL start in Week 8?

He arrived in Green Bay at the tail end of Brett Favre’s tenure in Green Bay but inherited a tremendously talented quarterback in Aaron Rodgers. After winning Super Bowl XLV, Rodgers was named MVP in two separate seasons and was almost an ever-present fixture at Pro Bowls, but the Packers were never able to advance beyond the NFC Championship game.

McCarthy’s time with the Packers saw the team regularly make the playoffs, and they were consistently among the top-scoring offenses in the league. But, there was a feeling that Rodgers performed better outside the structure of McCarthy’s offense when he was adjusting on the fly. By the end of their time together, there were rumblings of their relationship being irreparable due to Rodgers’ lack of respect for McCarthy’s coaching ability, citing his “low football IQ.”

Mike McCarthy’s time as head coach of the Cowboys

When Mike McCarthy was named the new Cowboys head coach, he was quick to tell reporters that he hadn’t wasted his year out of the NFL. He claimed that he had spent the time refining his knowledge of the game, focusing on creativity and innovation while looking in-depth at how data and analytics could help him gain an edge. Unfortunately for McCarthy, the data hasn’t been painting his Cowboys team in the most flattering light.

All is not lost, though. Despite a 2-4 start to the season, the Cowboys somehow, against all logic and odds, sit atop the NFC East. In fact, if the season ended today, they’d have a home playoff game.

He’ll have to get his players back on his side quickly, though. With starting quarterback Dak Prescott out for the season due to a compound fracture and dislocation to his right ankle, McCarthy has had to put his faith in former Cincinnati Bengals QB Andy Dalton.

Will Mike McCarthy be fired?

The Cowboys have the talent to win games. They possess one of the top offenses in the league, but they’re underachieving most weeks. However, owner Jerry Jones clearly feels that they’re in the midst of their Super Bowl window.

He showed patience with Mike McCarthy’s predecessor, Jason Garrett, who is now the offensive coordinator of the New York Giants, and came away with nothing to show for it. But prior to that, Allbright noted that Jerry Jones had no problem pulling the plug when he wasn’t happy with the results.

After purchasing the Cowboys in 1989, Jones oversaw the construction of a dynasty as the team won three Super Bowls over the course of four seasons in the 90s. He’s an aging billionaire who likes winning, and the fact that the Cowboys haven’t won a Super Bowl since the 1995 season will be getting more difficult for him to accept with each passing year.

In most situations, a first-year head coach brought in to work with a general manager from the previous regime could point fingers at the front office. But the general manager is the owner of the team, and the second-in-command is his son, so McCarthy won’t find a sacrificial lamb there.

Ultimately, winning cures everything. If the Cowboys are able to finish with a winning record without their starting quarterback, then Mike McCarthy would have a strong case for a second season. But, with divisional games against the Washington Football Team and Philadelphia Eagles in the next two weeks, he’ll need to start winning soon.