Harrison Bryant turned in a poor RAS at the position with the most correlation between "Elite" scores and performance. Can he buck that trend?

By Chris Spooner
September 8, 2020
What's in this article? Click to show
How a ‘Poor’ RAS works against Harrison Bryant
Correlation between RAS and value
Reasons for optimism despite Bryant’s poor RAS

Generally speaking, you should give a rookie three years before judging them. However, the NFL is becoming more and more a “what have you done for me lately?” league. It’s unfair to judge a rookie based upon his first training camp. Especially under the extraordinary circumstances that the league has faced this season. That being said, if early returns are any indication, the Cleveland Browns have a rookie tight end who may be well on his way to bucking some trends.

Tight end, perhaps more than any other position in the NFL, has a strong correlation between athleticism and success. It’s also arguably the toughest position for a rookie to make a significant impact in their first year.

Harrison Bryant is behind the proverbial eight ball in both categories, as he’s a tight end who put up a “Poor” RAS — or Relative Athletic Score — at the 2020 NFL Combine. Yet he was named the recipient of the Maurice Bassett Award, an award given out by the Browns yearly to the top rookie camp performer, and sits second on the Browns depth chart at TE.

How a ‘Poor’ RAS works against Harrison Bryant

“Harrison Bryant has a ‘Poor’ RAS” is a true statement, but what does that statement mean? The Relative Athletic Score was developed by Kent Lee Platte as a means for us to quantify a player’s athletic testing, be it at the NFL Combine or their Pro Day. With this score, we can effectively compare and contrast a player’s athleticism against their peers, and against those who have come before them, all the way back to the 1987 season. 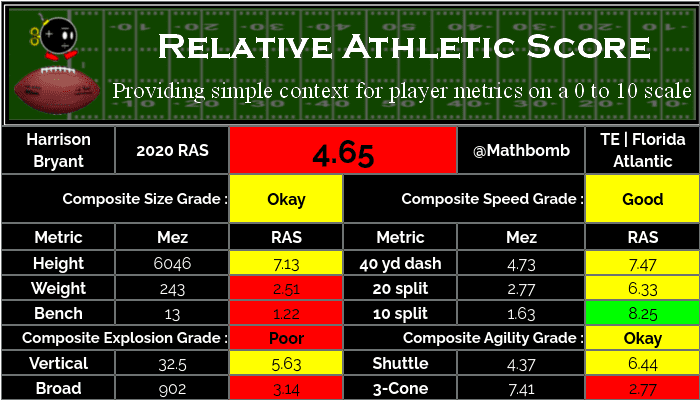 Bryant came away from the NFL Combine with an overall RAS of just 4.65, falling just short of the 5.0 threshold to avoid the “Poor” category. That score ranks Bryant as the 478th tight end out of 893 to record a RAS grade since 1987. What contributed to such a low score for the former Florida Atlantic product? Size and strength were the biggest factors.

Simply put, Bryant does not have the RAS of an elite athlete relative to other tight ends throughout history. But just how important is athletic testing? How much value is there in being an “Elite” athlete at the position?

Correlation between RAS and value

Everyone who makes it to the NFL is a superior athlete when compared to your average Joe. That much is a fact. But even within the NFL, there are different levels of athleticism. Speaking very generally, the more athletic a player is, the more value they bring to their team. That’s true of every position in the league, but the correlation is stronger at some positions than it is at others.

Here at PFN, we’ve developed our own metric, the Offensive Share Metric, or OSM. Developed by Brett Yarris, OSM is designed to measure how much of a player’s statistical output they alone were responsible for. It allows us to see who’s doing the things they need to do to win their matchups consistently, whether or not that shows up in the final stat sheet.

The OSM database goes back to the 2016 season. Of the top 10 OSM finishes over those four seasons, 70 of them had a RAS of 8.0 or higher — the “Elite” category. The position with the strongest correlation between an “Elite” RAS and a top 10 OSM? Tight end.

A whopping 24 of 39 tight ends to achieve a top 10 OSM had an “Elite” RAS. Only two tight ends were able to achieve a top-10 finish with a RAS of 5.0 or lower. All that paints a grim picture for Bryant. All things considered, there are reasons for optimism when it comes to the rookie tight end. It’s not all doom-and-gloom by any stretch.

The number one question we need to ask ourselves when looking at a player’s athletic testing is: “Does this coincide with what we see on tape?” For the answer to that question, we turn to PFN Senior NFL Draft Analyst Tony Pauline. In Pauline’s evaluation, strength was a concern. Pauline states, “Bryant possesses average strength and rarely finishes blocks.” That would coincide with what we see in Bryant’s RAS.

However, Pauline was fairly high on the tight end prospect, specifically pointing out that Bryant was “explosive at the point of attack.” That, despite not putting up outstanding numbers in the “Explosion” tests at the NFL Combine. All in all, it seems that the athletic testing numbers aren’t necessarily indicative of the player Bryant is in this case.

Perhaps the bigger reason for optimism with Bryant is the situation he’s landed in. The Cleveland Browns struggled in 2019, but they’ve revamped their coaching staff and have a new offensive philosophy. An offensive philosophy that will likely place a strong emphasis on the tight end position. Free-agent acquisition Austin Hooper will command most of the targets in the offense, but there should be plenty of room for Bryant.

Kevin Stefanski comes to the Browns from the Minnesota Vikings. The Vikings offense featured both Kyle Rudolph and Irv Smith prominently in their 2019 offense. The Stefanski-led offense was near the top of the league in multiple tight end sets. With Bryant beating out incumbent David Njoku on the Browns depth chart, the opportunity will be there for Bryant.

The 2020 offseason was unlike any other in the history of the NFL. Rookie tight ends normally take longer than other positions to acclimate to the league. That trend may be even more pronounced this season. Bryant has the deck stacked against him to find success early. But if any tight end was going to buck that trend this season, he’s a great candidate.