Cam Sutton has flown under the radar on a loaded Pittsburgh Steelers defense. In 2020, he should see an expanded role.

By Nicholas McGee
August 29, 2020
What's in this article? Click to show
Sutton struggles to impress in testing
Sutton’s catch point prowess
A playmaker in the box
Sutton’s short-area speed

Cam Sutton enters the 2020 season seemingly in line for an expanded role on the Pittsburgh Steelers defense that he has earned after three seasons in which he has proven himself to be a versatile and underrated playmaker. Sutton was selected in the third round of the 2017 NFL Draft by the Pittsburgh Steelers despite him failing to stand out in athletic testing. That investment in the former Tennessee cornerback has begun to pay dividends.

In his first full 16-game season last year, Sutton finished with five pass deflections and an interception, his yards per target average of 5.3 the lowest among all Steelers defensive backs. He played only 24.45 percent of the defensive snaps, but defensive coordinator Teryl Austin, per Teresa Varley of Steelers.com, said Sutton would have a larger role in the coming campaign. Austin pointed to pass coverage as an area where Sutton excels, and he has thrived in that aspect of the game even with testing numbers that indicated he might not have the athletic ability to make the jump to the highest level.

Sutton struggles to impress in testing 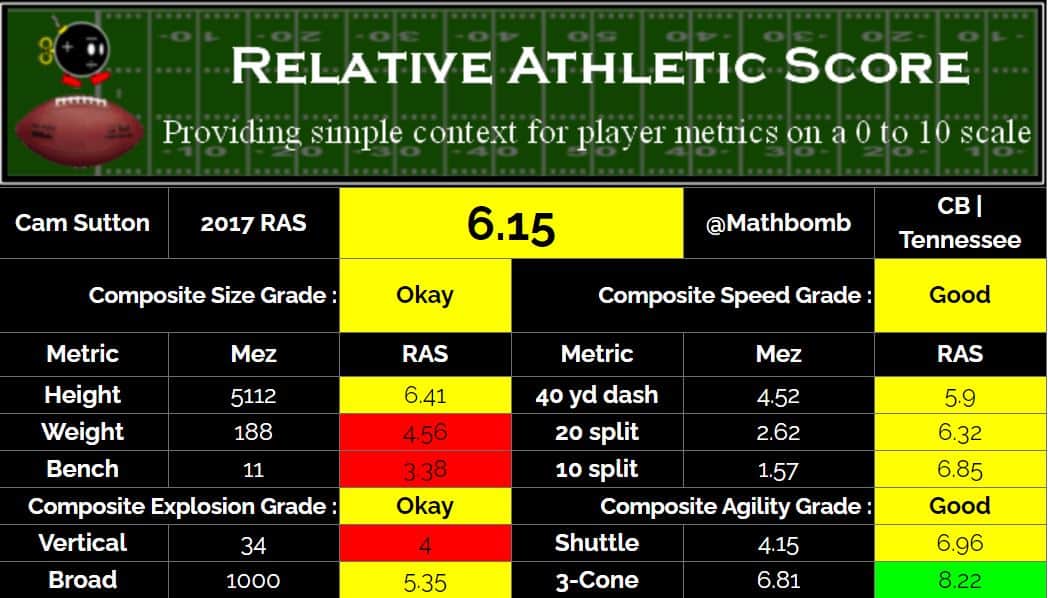 Sutton received a Relative Athletic Score (RAS) of 6.15 out of 10 for his efforts in Indianapolis and his pro day. He received good composite speed and agility grades, with the 3-cone the drill in which he performed best.

However, his size and explosion grades were markedly less impressive, Sutton earning a low score for his efforts in the vertical leap, suggesting he could struggle to make plays at the catch point.

That has not been the case when Sutton has been relied on, as he has utilized his instincts to make plays on the ball.

Sutton demonstrated his ability to make plays at the catch point in the Steelers’ 2018 season opener with the Cleveland Browns, which saw him save a touchdown and come down with a late fourth-quarter interception that forced overtime.

He prevented Tyrod Taylor from connecting with Rashard Higgins for a touchdown with a pass breakup in the endzone that owed to Sutton maintaining inside leverage and staying in position to negate Higgins’ size advantage and deflect the throw.

The interception came similarly, with Sutton again initially playing bail technique and staying to the inside of Josh Gordon before finding the football much earlier than the wide receiver and make a leaping interception.

Despite his below-par performance in the vertical jump, Sutton has had no issue leaping to disrupt passes and has even done so when guarding tight ends.

A playmaker in the box

Later in the same season against the Cincinnati Bengals, Sutton provided an example of his proficiency in coverage against tight ends with a pass breakup of Andy Dalton’s third-down throw to C.J. Uzomah. With his back turned to Dalton, Sutton demonstrated his awareness in reading Uzomah to decipher when to go up and make a play on the ball.

Sutton dropped into coverage on that play, having been lined up in the box, which is an area the Steelers could look to use him in more often if he continues to produce plays like his sack of Baker Mayfield from last season’s visit of the Browns.

While Sutton did not have to do anything spectacular to bring down Mayfield, what stood out was his closing speed. Sutton’s highest RAS within his composite speed grade came in the 10-yard split, and the short-area burst that was evident in him dropping Mayfield for a loss has also shone through in coverage.

Sutton showcased recovery speed in breaking up what looked a sure touchdown throw from Lamar Jackson to Marquise Brown last season. Operating from the slot, his hip turn was labored, but Sutton did an excellent job of taking advantage of the adjustment Brown had to make to the football to make up ground and stop the completion with a diving breakup.

The burst Sutton has helped him to atone for a lack of fluidity against Brown. However, it looks more impressive when he can operate in a straight line as he did on a pass breakup against Mike Williams.

Sutton transitioned magnificently out of his backpedal from off coverage, surging out of his break to stay in stride with Williams and bat down a throw over the middle from Philip Rivers.

Related: Is signing Jadeveon Clowney worthwhile for the Steelers?

Successful in guarding big-bodied pass-catchers like Uzomah and Williams as well as quicker receivers akin to Brown, Sutton has the nuance to his game in pass coverage to make the most of the athletic ability he has. Still, he minimizes the areas that pre-draft testing showed to be weaknesses.

The question for the 2020 season concerns whether Sutton will take the starting nickel role away from incumbent Mike Hilton or if he will be deployed as a moveable chess piece given his capability to play the boundary, the slot, and in the box.

As NFL defenses move towards “position-less” players, Sutton’s versatility is extremely valuable to Pittsburgh. The Steelers led the league in turnovers last season, so are apparent candidates for regression on defense. However, Sutton has outperformed his athletic testing when on the field and, by utilizing him more, Austin could improve his unit’s chances of defying the odds as the Steelers seek a return to the postseason in 2020.