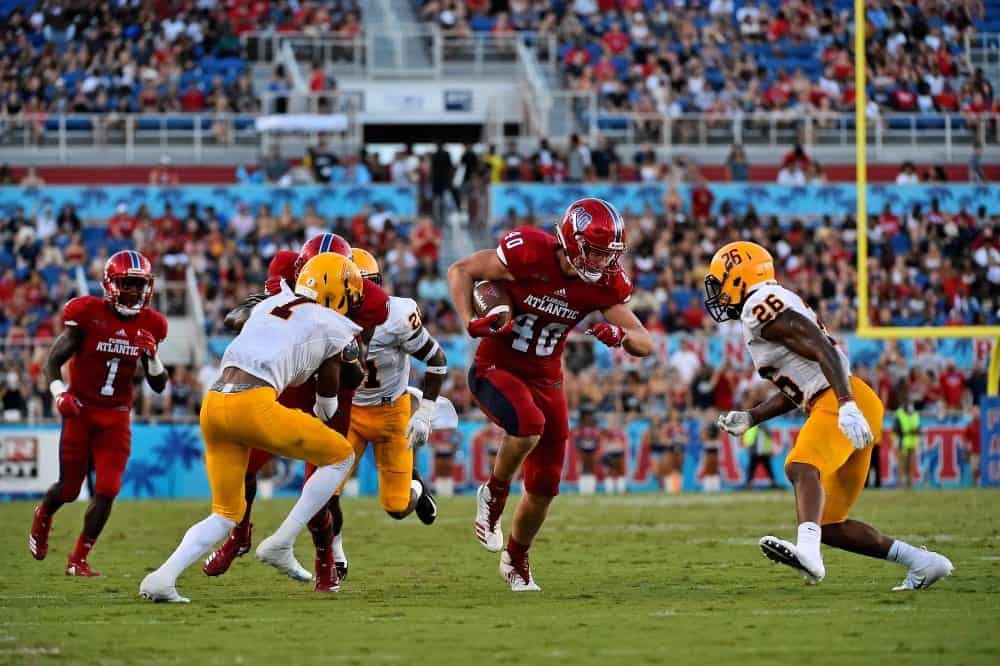 Positives: Quick, explosive defensive end who projects as a situational pass rusher. Fires off the snap with an explosive first step, plays with outstanding pad level and shows the ability to bend off the edge. Rarely off his feet, plays with balance and keeps his feet moving. Intense, shows a lot of toughness and plays through the whistle. Occasionally stands over tackle and collapses down the line of scrimmage to defend the run. Possesses a closing burst of speed and wraps up tackling.

Negatives: Lacks size and gets easily controlled at the point or slowed by blocks. Possesses average timed speed. Production at the college level was nothing spectacular.

Analysis: Bonner flashed ability throughout his college career as a pass rusher, and he’s a relentless defender who always chases to make plays. He lacks great upside, but he plays with a special-teams mentality, which will help his cause this summer.

Positives: Terrific pass-catching tight end with big upside. Smart, effectively reads the defense and consistently finds the open seam on the field to make himself an available target. Finds his way down the middle the field, adjusts to the errant throw and makes the reception in stride. Takes a pounding and holds onto the ball. Possesses soft and strong hands and fights to come away with the difficult grab. Plays with focus and concentration. Explosive at the point of attack and gives effort as a blocker.

Negatives: Possesses average strength and rarely finishes blocks. Plays to one speed and lacks deep burst, despite his 40 time. Lacks balance and vision as a blocker.

Analysis: Bryant was a highly celebrated college tight end who projects well to the next level for variety of schemes. While I like him most as a move tight end, Bryant could be used in a traditional role as he physically matures and improves as a blocker. In the end, he possesses all the tools necessary to develop into a No.1 tight end at the next level.

Positives: Tall, feisty defensive back who plays aggressive football. Instinctive, reads the action and quickly closes to the play. Quick-footed in reverse, fluidly flips his hips in transition and engages receivers throughout the route. Battles to break up throws, plays heads-up football and lays out or extends to knock away passes. Keeps the action in front of him, fires up the field to defend the run and displays a short burst of speed.

Negatives: Rarely gets his head back around to track the pass in the air and faceguards too often. Deep speed is a major concern.

Analysis: Pierre is a feisty cornerback who physically beats down opponents to defend the throw and voluntarily stops run plays and screen passes. His lack of speed limits the type of schemes he’ll be effective in, and I believe Pierre is best facing the action as a dime back in zone coverage.

Positives: Undersized linebacker who flies around the action and sells out to make plays. Stays with assignments, fires up the field in run defense and wraps up tackling. Breaks down well, possesses good change-of-direction and chases the action hard. Remains disciplined with coverage assignments.

Negatives: Plays to his 40 time, displays average pursuit speed and does not look comfortable in reverse. More of a drag-down tackler.

Analysis: Smith is a hard-charging linebacker with average physical skills for the next level. He could back up on the inside of a 3-4 alignment, but Smith must make his mark on special teams to have any hope to make a roster.

Positives: Hard-working college tackle who is best in a small area. Stays square, makes outstanding use of angles and effectively outpositions defenders from the action. Active with his hands, strong at the point and keeps his feet moving. Fires out to the second level and gets good fits on linebackers.

Negatives: Does not block with consistent leverage and lacks footwork off the edge. Minimally effective in motion.

Analysis: Walton was a solid college tackle, but he’s an average athlete who must be used in confined quarters. He lacks upside, but he has enough size to get consideration on a practice squad this summer.