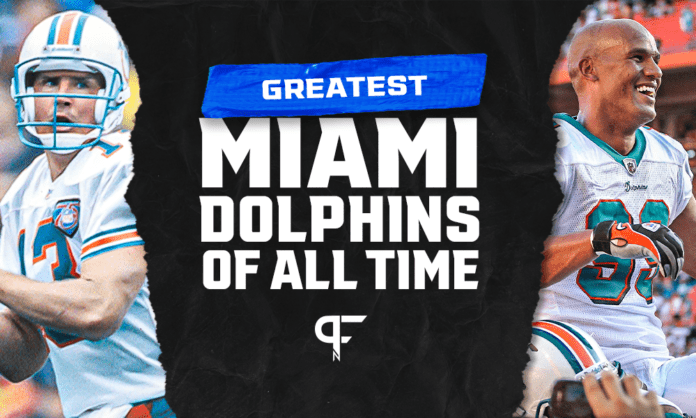 15 greatest Miami Dolphins of all time, from Dan Marino to Dwight Stephenson

Selecting the greatest Miami Dolphins of All Time is no easy task, but which 15 players did we feel were worthy of making our list?

The Miami Dolphins have done something in the NFL that no other franchise has done, but making a list of their greatest players of all time is a more difficult task than originally believed. Despite appearing in five Super Bowls and winning two, there are only nine players in the Hall of Fame that played a significant portion of their careers in Miami. The Pro Football Network team came together to form this list of the 15 greatest Miami Dolphins of all time.

In any list, there are difficult names to cut. For the Dolphins, that player is Sam Madison. Madison played nine years for Miami, making four Pro Bowls and earning two first-team All-Pro honors. He had 31 career interceptions for the Dolphins.

Stephenson isn’t just one of the greatest Dolphins players of all time — he was the best center in the league during his time and a Hall of Fame inductee because of it. Despite only playing four full seasons as a starter, he made such an impact that the voters considered him HOF worthy. That’s quite an impressive stretch of four seasons.

Stephenson was an undersized center that used quickness and explosion as a blocker. He was especially adept at using a defender’s own momentum against them, and he had a quick trigger in combo situations and blitz pickups. His instantaneous first step got to interior defenders quickly, and his ability to out-leverage them was masterful.

There was no greater receiving weapon for Dan Marino’s historic 1984 season than Clayton. He’s one of the greatest Dolphins players of all time, spending 10 productive seasons with the team. Clayton had four seasons of double-digit touchdowns between 1984 and 1991 to go along with five Pro Bowl nominations. Incredibly, Clayton never received first-team All-Pro acknowledgment. Nevertheless, Clayton did lead the league in touchdowns twice during his career.

Kuechenberg was one of the anchors on the offensive line, playing 14 seasons for Miami. In fact, he helped anchor the offensive line of the 1972 Dolphins team that went undefeated. He was a six-time Pro Bowler and made one All-Pro team. Kuechenberg won back-to-back Super Bowls on two of the greatest professional football teams ever seen. He was known for his unbelievable toughness, even in relation to other offensive linemen. An eye injury at age 36 stopped his NFL career, just one season before Marino’s record-shattering campaign.

Warfield isn’t just one of the greatest Dolphins players of all time; he’s one of the greatest downfield threats ever. Warfield won an NFL championship in Cleveland, but he won two Super Bowls with Miami. His two All-Pro seasons were also in Miami, although he failed to reach the 1,000-yard mark in either. Yet, he did have 11 touchdowns in each. Warfield did more of his statistical damage with Cleveland, but he cemented his legacy in Miami.

Although four of his five All-Pro accolades came in Boston, Buoniconti definitely made his mark as one of the greatest Dolphins of all time. His 32 interceptions at linebacker are still tied for the third-most ever at the position. He made three Pro Bowls while with Miami and was the leader of those vaunted Super Bowl defenses. Despite his lack of size, a theme for the Dolphins’ all-time linebackers, Buoniconti went from undrafted by the NFL to the Hall of Fame.

Kuechenberg was one of the anchors of those Super Bowl teams, but Langer held down the center of the offense. The undrafted lineman made six straight Pro Bowls and was selected as a two-time All-Pro.

Larry Little probably holds the title as the best lineman from those championship Dolphins teams, but Langer played every offensive snap of the perfect 1972 season. His workman-like attitude and the gratitude he showed others that helped him along his NFL journey make him one of the most likable characters in franchise history. He was one of five first-ballot Hall of Famers in Miami history.

Wake is one of the most interesting stories in NFL history, making his gravitational pull quite imposing. Despite not having team success, Wake is one of Miami’s greatest players of all time. Starting his career at the age of 27, Wake put together eight outstanding seasons in his 10 seasons with the Dolphins. Before that, he sacked the quarterback 39 times in two CFL seasons. Wake’s stadium entrance, rocked-up frame, and impressive hairstyle made him an outstanding character as well. His 98 sacks for Miami are good for second in franchise history.

Scott is the Dolphins’ franchise leader in interceptions (35) despite only playing six seasons with the team. He was a terrifying presence on the back end of the defenses that led the Dolphins to three straight Super Bowls and back-to-back titles.

Scott was integral in finishing the 1972 season unbeaten. His two interceptions in the Super Bowl helped propel the team to a 14-7 victory, and it helped him win the game’s MVP award. In the next Super Bowl, he once again came up big. He’s the only player ever to record two fumble recoveries in one Super Bowl, recovering one by the opposing team and a second from a fumble made by his own team.

Richmond Webb isn’t a Hall of Famer, but he is part of the 1990s All-Decade team. Webb went to seven straight Pro Bowls and is one of the greatest Dolphins of all time. Webb also made two first-team All-Pros and set a team record for consecutive starts — starting 118 in a row. Despite his franchise-record accolades, Webb has consistently been snubbed by the Pro Football Hall of Fame. In their 10 seasons playing together, he and the Dolphins’ line never allowed more than 28 sacks.

Like Buoniconti, Thomas was an undersized linebacker. Standing at just 5-foot-11 and 228 pounds, he looked like a bowling ball on the field with his off-color black neck roll. Thomas also made seven Pro Bowls, but he tallied five All-Pro selections as well. He’s consistently talked about as one of the Hall of Fame’s biggest snubs. One of his issues is that he’s viewed as, at best, the third-best linebacker of his generation. However, he actually has one more All-Pro than Brian Urlacher.

Greatest Miami Dolphins of all time | 5-1

Who are the five greatest Dolphins players of all time?

Kuechenberg, Langer, and Little — those three were an interior combination unlike any other. From 1971-1975, Little made five consecutive All-Pros and was considered the conference’s best lineman in 1970, 1971, and 1972.

Like many of the greatest Dolphins players of all time, Little was an undrafted player who began his career slowly before latching on with Miami. The Dolphins loved pulling their guards, and Little was one of the most dominating forces in the sport when blocking in space. At the time of his Hall of Fame induction, he was one of three guards to be enshrined and one of 14 undrafted players.

The two-time All-Pro was never forced to do too much for the Dolphins’ ball-control offense. Still, Griese led the league in touchdowns and quarterback rating in 1977. The next season he completed 63% of his passes, which was also a league-best mark. Six times he was elected the Dolphins’ season MVP and was considered one of the more efficient quarterbacks of his time. He doesn’t have the individual accolades others on this list do, but his team MVPs prove his worth inside the franchise.

In addition to being one of the greatest Dolphins players of all time, Csonka was the leading rusher on an incredibly run-heavy squad that went to three straight Super Bowls and won two. The Hall of Famer was only a two-time All-Pro, but he shared the backfield with another talented back in Mercury Morris. It was a team effort, but Csonka was the guy. He was a hulking back, standing at 6-foot-3 and nearly 240 pounds. Bigger backs that bring and take punishment usually suffer from ball-control issues. However, Csonka only fumbled 21 times in his 11 seasons.

Taylor is the top sack artist in Dolphins’ history and seventh on the all-time sack list. Amazingly, the versatile pass rusher was an All-Pro only three times in his career. Still, he was the Defensive Player of the Year in 2006, when he scored 2 defensive touchdowns and forced a league-high 9 fumbles. He’s also part of the 2000s All-Decade team alongside Julius Peppers, Michael Strahan, and Dwight Freeney.

Marino is the greatest player to don the Dolphins’ aqua blue. His 1984 season is the most impressive quarterbacking season ever. Despite never winning a Super Bowl in his career, he’s remained relatively free of criticism for not getting the job done. His career performance outweighs team success. Marino was surprisingly only a three-time All-Pro, but he led the league in many statistical categories throughout his career. He was evidence of what the modern game would turn into and is one of the greatest quarterbacks of all time.