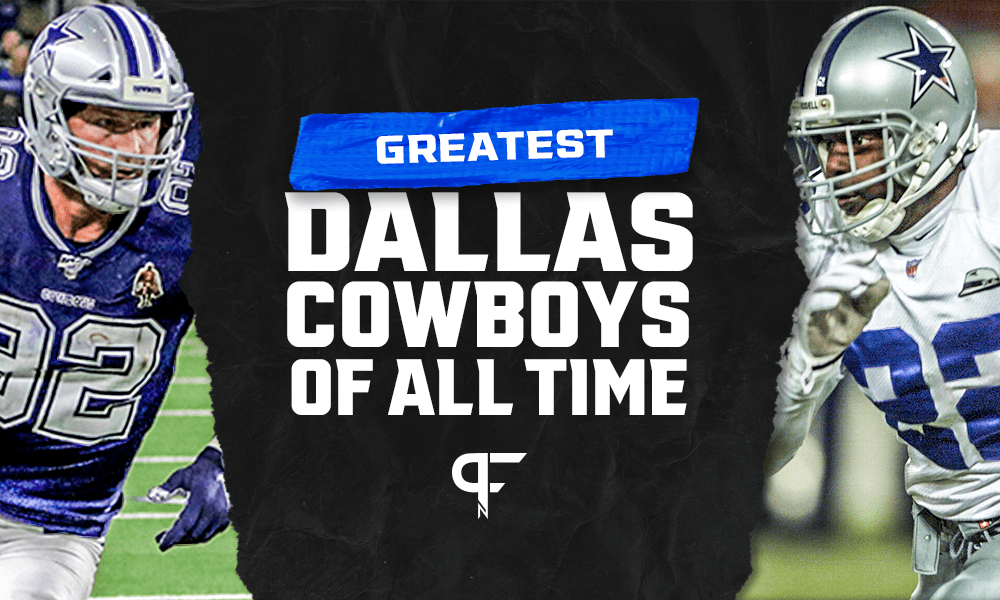 The list of greatest Dallas Cowboys players of all time could go on forever. Many of these players are among the best in NFL history.

The Dallas Cowboys are one of the most storied franchises in NFL history, and their greatest players of all time are proof of their commercial dominance. They are “America’s Team” for a reason. They’re the biggest draw in the NFL and the most valuable franchise in any sport.

Before we begin, it’s important to note that many others deserved consideration for the top 15. However, these are the ones with the combination of professional accolades and time as a Dallas Cowboys player.

One active player garnered consideration for the list, but we’ll let him finish his career before we put him on. Hopefully, Cowboys fans (and football fans in general) appreciate Zack Martin’s greatness. He’s the greatest active Cowboys player and will go down as the best guard of his generation.

Greatest Dallas Cowboys of all time | 6-15

With so many great players suiting up for America’s Team, who cracks the top 15?

Sanders is the best player on this entire list relative to their standings in NFL history. However, Prime Time, or as he is referred to now by everyone but one reporter, “coach,” only played five seasons as a Cowboy. Sanders made three first-team All-Pros and four Pro Bowls to go along with his 14 interceptions in Dallas.

He also had 4 return touchdowns during his time with the Cowboys — the most in franchise history. Sanders had a massive impact on the Cowboys, but the team could only win one championship in his time, which is a discussion too deep for this medium.

Witten is the most recent of the greatest Cowboys players to grace the list. His résumé and standing as one of the top tight ends ever might have him gradually move up the list as time passes. The players on these greatest lists are like scotch — they get better with age.

Witten sits fourth in all-time receptions, a feat only surpassed by Jerry Rice, Larry Fitzgerald, and Tony Gonzalez. Witten hauled in a whopping 71% of his targets, making him one of the most reliable weapons ever. Over half of his receptions resulted in first downs, and he scored 72 touchdowns as a Cowboy. That mark is one less than franchise leader Dez Bryant’s 73 receiving touchdowns.

Pearson was already a Cowboys legend before he trolled the Philadelphia Eagles crowd at the 2017 NFL Draft. Pearson was a big-play weapon that was known as Roger Staubach’s most trusted target. He also caught the original “Hail Mary.”

Pearson is a Hall of Famer who made three All-Pros throughout his career. Pearson came up big in big games, cementing himself as one of the greatest Cowboys of all time. Yet, he also led the league in receiving yards in 1977 and recorded over 1,000 yards twice.

There’s no doubt that Ware was the most dominant force in Dallas during my formative football years. The eventual Hall of Fame pass rusher led the league in sacks twice. In 2008, he posted a 20-sack campaign tied for the 11th-most in a single season ever. His 27 tackles for loss were also the sixth-best mark of all time.

Additionally, Ware had a season of 19.5 sacks and 26 tackles for loss. Incredibly, he became the first NFL player with two 19-sack seasons. Yet, he did not lead the league in sacks that year. Jared Allen had the second-best season ever with 22 sacks that year. It’s a shame Ware never won a Super Bowl with the Cowboys, but he deserved the one he got in Denver.

Only one Cowboys offensive lineman had a better streak of play than Wright did from 1971-1976. In that time, Wright made three straight first-team All-Pros and six straight Pro Bowls. Before playing offensive tackle full-time, Wright actually lined up at tight end, defensive end, and offensive tackle for legendary coach Tom Landry.

His use at multiple positions is a testament to his athletic ability. He played with great range and power and was voted to the 1970s All-Decade Team. In 2004, Wright was the first lineman inducted into the Cowboys’ Ring of Honor, becoming a Hall of Famer two years later.

In an era when Pro Bowls mattered, Renfro hardly ever missed out on the honor. He went to 10 straight to begin his career, accomplishing the feat at safety and then during a seamless transition to cornerback. In his 1969 All-Pro season, Renfro led the league with 10 interceptions.

Renfro isn’t just one of the greatest Cowboys of all time because of his pass-defending ability. He was a phenomenal return man, with 3 return touchdowns throughout his Cowboys career. He holds the franchise record for interceptions with 52, and that’s despite teams not throwing his direction once he transitioned to cornerback.

When your nickname is “Bullet,” you have a reputation to uphold. He was already an accomplished athlete before entering the NFL. In 1964, he won the Olympic gold medal in the 100-meter dash. Leading up to the Olympics, he won 49 consecutive sprints. He’s the only NFL player to win a Super Bowl and Olympic gold medal.

Dorsett is one of the greatest Dallas players of all time and one of the most consistent running backs in the game between 1977 and 1985. Herschel Walker spoiled Dorsett’s late-career production in Dallas, but in 11 seasons with the Cowboys, Dorsett amassed over 12,000 yards rushing and 72 rushing touchdowns.

Dorsett owns the longest-ever touchdown run, as he went 99 yards against the Minnesota Vikings in 1982. He was a smaller back, but he had phenomenal acceleration and speed that allowed him to punish defenders inside the box. He had a freestyle ability that seemed to be a recipe for what eventually led to Barry Sanders’ success.

Allen would be one of the top five greatest players in many NFL franchises, but he falls outside of that with the Cowboys. He famously bench pressed nearly 700 pounds. That strength translated on the field, where he absolutely demolished defenders left and right. Allen had the power to take the will away from the opposition and the athleticism to meet them in space.

Allen wasn’t just a monster interior blocker, either. No, Allen rotated wherever he was needed on the Cowboys’ offensive line. In 1998, he played all 16 games as the left tackle. He’s also one of a select few nominated for two different All-Decade teams, earning the honor for the 1990s and 2000s.

White spent an incredible seven of his 14 seasons as a first-team All-Pro. The “Manster” was the intimidator of the NFL during his prime. The ferocity in which he played is legendary. White was the No. 2 pick in 1975 and spent his first two seasons somewhat unsuccessfully at linebacker. That changed the second he made a move to defensive tackle.

He’s one of the greatest defensive tackles of all time, and yet, he still isn’t the greatest in Cowboys history. White officially has 52 sacks, but he unofficially has 111, as sacks weren’t an official stat until 1982. His agile frame and powerful hands led to masterful pass-rush moves that could quickly defeat opposing blockers.

Next Page: The top five Dallas Cowboys of all time
RELATED ARTICLES
NFL How to Watch