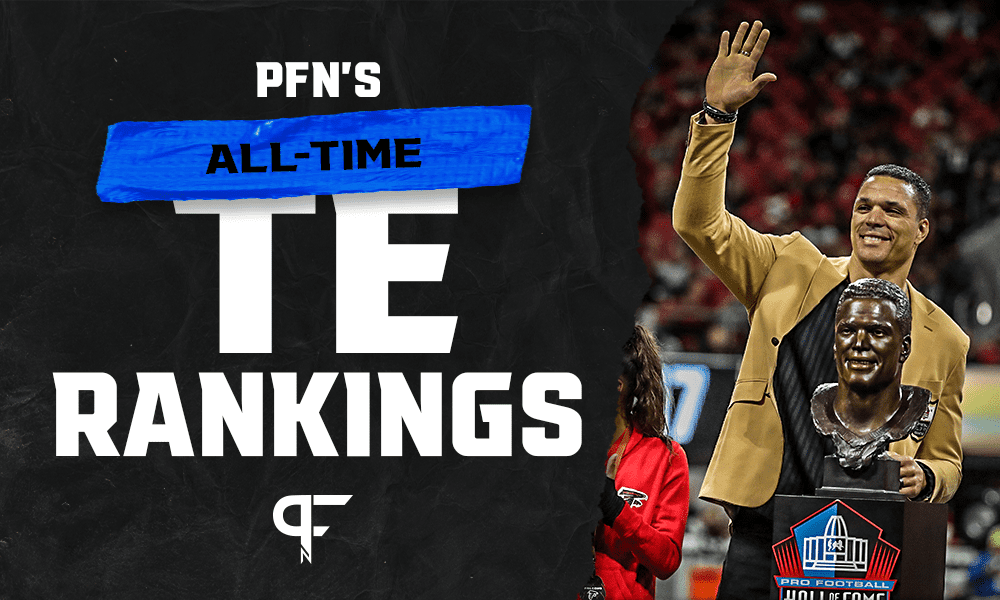 The tight end position is the most comprehensive position on the offense (aside from quarterback). The greatest tight ends of all time are asked to pass and run block from a three-point stance, run routes from inline, and be able to split out in the slot or out wide. The transition from college to the NFL rarely materializes the way we envision it. So often, tight ends fall short of their expectations. It exemplifies the complexity of the position.

As with every other “greatest ever” conversation we’ve had at the Pro Football Network, the work done in the Super Bowl era is what matters most. That is an important qualifier for one of the entrants.

Players such as Jimmy Graham and Todd Christensen also garnered consideration for the top 13.

These tight ends don’t necessarily have the résumé to be considered at the apex of the list but still deserve recognition as some of the greatest of all time.

Amazingly, Smith isn’t more widely recognized for his contribution to the league. When Smith retired, he was the all-time leading receiver for the position. He helped change tight end, making it an all-around offensive weapon instead of a primary blocker that occasionally caught passes.

Smith might deserve a higher standing in the talk for the greatest tight ends of all time. In the same era as other greats like Mike Ditka, Charlie Sanders, and John Mackey, Smith had himself the best season and most prolific stretch of any tight end. In 1967, he averaged over 21 yards per catch and had over 1,200 yards but lost out on an All-Pro bid to Mackey, who had 686 yards that year.

Considering Smith was a competent blocker himself, not receiving at least one All-Pro in his Hall of Fame career smells funny.

This was easily our most intense discussion as a team. Our Super Bowl era parameters practically eliminate Ditka from contention. His best season in the modern era saw him average 32.4 yards per game — he did nearly all of his damage during the four years leading up to the Super Bowl era. Therefore, the first tight end inducted into the Pro Football Hall of Fame lands at No. 12.

However, Ditka’s 12 touchdowns as a rookie still stand as the highest total ever for a rookie tight end. Rob Gronkowski is the only other player at the position to reach double digits (10).

Newsome is one of the most well-rounded football personalities ever. The Hall of Fame tight end deserves the same accolades for his time as Baltimore Ravens general manager. As a tight end, he made the all-decade team for the 1980s alongside Kellen Winslow Sr.

Newsome produced two 1,000-yard seasons in his career and twice caught 89 passes. He was one of the first at the position to stretch the field as a vertical target. The NFL ranked Newsome #73 in the Top 100 Greatest Players.

Sanders was a bit of a trailblazer, and his abilities make him one of the greatest tight ends of all time. He was a three-time All-Pro and was also voted to the all-decade team for the 1970s. He was one of the first athletes at the position to play basketball in college. That translation still holds today, with some of the greatest ever playing both sports.

Sanders was athletic, elusive, and powerful. Although he was long and lean, he also served well as a blocker. He never had an outrageous statistical season in his career relative to others, but his impact on the game went beyond the stat sheet.

Kelce’s impact goes beyond the stats sheet as well, but his stat sheet is filled to the brim. Kelce (pronounced Kels, as many just learned) is one of the best targets in all of football, regardless of position. He’s been a model of consistency for the past seven seasons, with the last five all netting him over 1,000 receiving yards. His year-to-year efficiency remains about even, which is a testament to his talent and situation.

He’s the modern-day tight end. It may surprise some, but he takes the majority of snaps from inline. But what makes Kelce special is his ability to flex out wide in a traditional X-receiver alignment. He’s a physical mismatch for every defender he faces.

Casper is in the mold of a more traditional tight end. At 250 pounds, he was one of the bigger playmakers in the game. He had long arms and massive hands and an uncanny ability to not care about contact coming to the catch point. His stature and athleticism allowed him to punish tacklers and be a plus blocker.

His four-year stretch from 1976-1979 was incredible. He dominated the position, being voted onto four straight All-Pros. His overall game was highlighted by the pride he took as a blocker.

Speaking of traditional tight ends — Jason Witten, everybody! Witten has the second-most catches of any tight end in history and is one of only two to catch more than 1,000 career passes. The two-time All-Pro and 11-time Pro Bowler caught over 71% of his targets.

He proved every week how valuable a weapon he was in terms of moving the chains. Over 54% of his receptions went for first downs. Witten, like Casper, was also known for his superb blocking ability. He was the team’s security blanket for a good portion of his 17-year career.

Mackey was an annihilator over the middle of the field. His powerful, athletic frame did everything from bounce off to bowl over defenders. He wasn’t known for his hands, but he got the job done as a body catcher. Mackey possessed a compact and robust frame that gave him outstanding contact balance.

The videos of him stringing together broken tackles are plentiful. It helps cement his spot on the list of greatest NFL tight ends. College football named their award for the best tight end in the nation after Mackey. He also was the head of the player’s association during the time of the NFL’s first strike.

Greatest tight ends of all time | 5-1

We may not have the modern tight end without Kellen Winslow. Don Coryell and Joe Gibbs were the first to create a more positive environment for these hybrid players. They got Winslow off the line of scrimmage and away from the tackle box to help maximize his talents. And he turned that talent into one of the greatest tight ends of all time.

Winslow was the power forward up the seam, but he also resembled Kelce working the sidelines. That doesn’t mean Winslow couldn’t block, though. He was a powerful and athletic blocker as well.

Sharpe defined the H-back position in the NFL. He was not an overwhelming force as a blocker. What he did was usher in that era of player, as the league began to be more pass-heavy. The Bronco/Raven was a four-time All-Pro that made eight Pro Bowls. Furthermore, he’s part of the 1990s All-Decade team.

Sharpe was athletic and smooth, which translated to production because safeties couldn’t handle him athletically, linebackers had no chance, and cornerbacks weren’t strong enough to blanket him. He did everything well as a receiver, including finding the soft spot in zone and running his mouth. He’s one of the greatest tight ends of all time and one of the best-ever trash talkers.

The Kent State basketball player went from undrafted to Hall of Famer. He’s one of the most impressive athletes in the sport’s history. That isn’t just at tight end but across all positions. Gates was endlessly explosive. His years crossing over defenders in basketball translated to route running and after-the-catch ability.

However, many tight ends have hot flashes and burn out swiftly. Gates did no such thing. He was productive until he was nearly 40 years old. His 955 catches are third-most all-time for tight ends. Like teammate LaDainian Tomlinson (one of the best RBs ever), Gates had a knack for crossing the goal line. His 116 touchdowns are No. 1 for the position.

Gronkowski doesn’t have the longevity of many of the tight ends on the list, but his physical peak may have been the most dominant. The four-time All-Pro was the foremost red-zone weapon in the league during the first six years of his NFL career. Despite his Madden Create-A-Player frame and lumbering running style, Gronkowski is one of the most dominant downfield weapons we’ve seen at the position.

Gronkowski’s 14 postseason touchdowns are the most ever at the position. Although he was a dominating receiver, he was (and still is) a dominant run blocker. Even as a relative non-factor at times for the Buccaneers in 2020, he showed up in the Super Bowl, catching 2 touchdown passes. Gronkowski’s peak ability was too much to ignore on the list of greatest tight ends of all time.

It’s nice when the greatest player ever to do it makes it an easy discussion. Gonzalez is the tight end. No positional great that separated themselves were quite the physical specimen Gonzalez was. Tom Brady was a sixth-round pick. Jerry Rice wasn’t a freak like Randy Moss or Calvin Johnson.

Gonzalez is a special breed of the greatest ever. He has the most All-Pros ever at the position. Additionally, he is the leader in catches and yards for the position and is second in touchdowns. He’s a part of the 2000s All-Decade team as well. Like Gates, Gonzalez excelled as a basketball player, and that skill set translated to football. Nobody quite came down with jump balls as Gonzalez could.