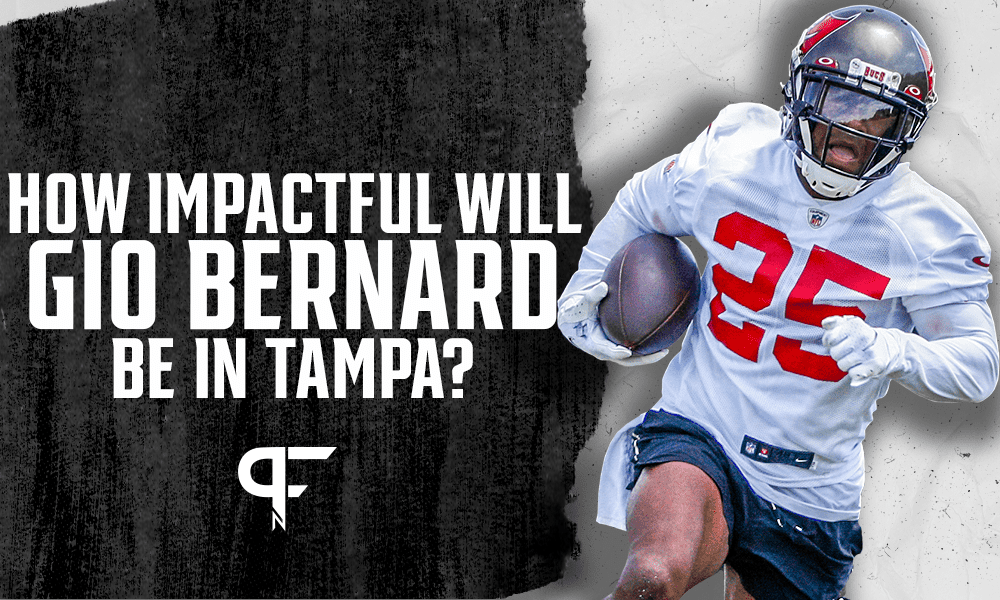 Gio Bernard’s massive quads have garnered a great deal of social media attention lately, both in general and within the fantasy football community. They were prominently displayed in a practice photo taken by Tampa Bay Buccaneers’ team photographer Tori Richman. Bernard and his thighs are the latest running back/leg pairing to go viral.

After being released by the Cincinnati Bengals back in early April, the Buccaneers immediately signed him to a one-year, $1.2 million deal that includes $850,000 guaranteed. Can Bernard rekindle the magic from earlier in his career now that he’s not playing behind Joe Mixon? Will the 29-year-old running back be fantasy-relevant with the Buccaneers? This article will examine those questions and more.

The Buccaneers were in the market for a pass-catching running back after not resigning LeSean McCoy and landed a great one in Bernard. It would be surprising to see Tampa Bay lean heavily on the veteran as a rusher at this stage of his career. However, the Buccaneers averaged 7.4 targets per game to their RBs last season.

The Buccaneers have a plethora of running backs

Jones averaged 16.7 opportunities per game and was Tampa Bay’s primary starter during the regular season in 2020. He finished as an RB2 or better in 57% of his games in PPR formats. Fournette led the team with 36 receptions and went nuclear during the playoffs to the tune of 448 total yards and 4 touchdowns. Vaughn only averaged 14 snaps per game in the seven he was active. He finished the season with 143 total yards and a touchdown.

All three running backs are returning this season. The Buccaneers enter the season with only 29 available targets and 12 unaccounted rushing attempts.

The addition of Bernard to the Buccaneers’ running back committee will pay more dividends in real-life NFL and not fantasy football. Once Fournette and Jones get fed opportunities, there will only be a few scraps available. The Buccaneers ranked 27th last season in rushing attempts per game (24.5). This trend is likely to continue in 2021 with Brady still playing at a high level.

It’s important to briefly examine Bernard’s past before discussing his projection for 2021. He was selected in the second round of the 2013 NFL Draft out of the University of North Carolina. Bernard played in 115 games and rushed for 3,697 yards and 22 touchdowns on 921 attempts so far in his career. He also contributed as a receiver out of the backfield with 342 career receptions. Were you aware that this was the most by a running back in Bengals history? Bernard’s 2,867 receiving yards were the second-most in franchise history.

Bernard accumulated 416 rushing yards and scored 3 touchdowns in 2020. He also finished with 47 receptions for 355 yards and 3 additional scores. Bernard was productive early in his career. He averaged 15 opportunities (rushing attempts plus targets) and 75 total yards per game from 2013 to 2016. The former Tar Heel finished as an RB2 or greater in 54% of his games during that time frame.

The absence of Bernard opens the door for Mixon to have a larger opportunity share this season. This has also been mentioned publicly by Cincinnati offensive coordinator Brian Callahan. Many anticipate that Samaje Perine will open the season as Mixon’s backup. The Bengals’ starting running back was being used more as a receiver out of the backfield last season before suffering an injury in Week 6.

Did you know that Ezekiel Elliot, David Johnson, Alvin Kamara, Miles Sanders, Devin Singletary, and Clyde Edwards-Helaire were the only running backs who ran more routes per game than Mixon at that point in time? He was finally being deployed as a bell cow.

Many have viewed Bernard as simply a backup over the last four seasons, but he averaged nearly 30 snaps per game — Mixon averaged 38.6 per game. Mixon is an excellent value in fantasy drafts, especially at his current average draft position. And now you’re wondering — what can we expect from Bernard this season in Tampa Bay?

Given the information we have around Bernard, both historically and looking at his outlook in Tampa Bay, he projects for around 4 opportunities per game in 2021. This would increase substantially if Fournette or Jones were to miss time. Bernard can be viewed as more of a high-end RB6. A reasonable projection for him is 50 touches, 293 total yards, and 3 touchdowns.

Bernard is readily available in the double-digit rounds of fantasy drafts when you review redraft ADP data from Fantasy Football Calculator. This trend is also similar in pay-to-play fantasy formats such as the National Fantasy Championship. Bernard has an ADP of 202.47 as the RB58 overall. His ADP is slightly lower in PPR formats on Sleeper (252). It would be surprising to see his ADP change this summer unless Fournette or Jones suffers a long-term injury.

Should you draft Bernard at this ADP in 2021?

Bernard currently appears unlikely to return value on his price, even with this extremely low fantasy ADP. Multiple dominoes have to fall for Bernard to be fantasy relevant in the Buccaneers’ crowded backfield. Other players at his ADP are better positioned to provide a significant return on investment that you should prioritize, such as Jets wide receiver Elijah Moore, Giants receiver Kadarius Toney, or Titans tight end Anthony Firkser.

It’s difficult to recommend Bernard outside of extremely deep formats or as a late-round flier.