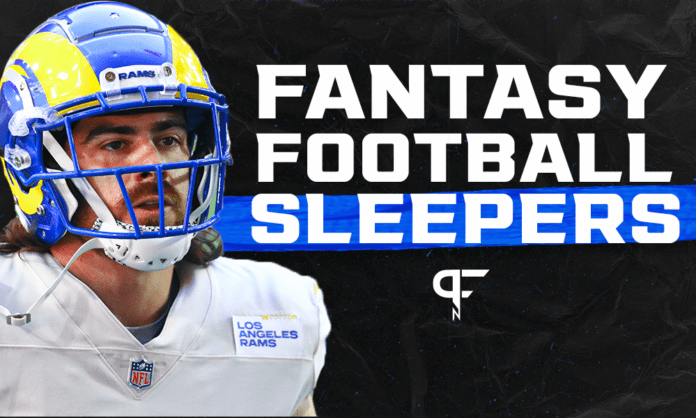 In a tight division like the NFC West, which players have the potential to be fantasy football sleepers in the 2021 NFL season?

By Andrew Hall
August 26, 2021
What's in this article? Click to show
Does Gerald Everett count as one of the NFC West’s fantasy football sleepers?
Is Chase Edmonds still technically a sleeper for 2021?
Could rookie Trey Sermon be a fantasy sleeper this year?
Will Matthew Stafford exceed expectations this season?
Will Tyler Higbee surprise fantasy football managers as a sleeper candidate?

The 2021 fantasy football season is finally upon us, and with drafts around the corner, everyone is looking for fantasy sleepers. Today we’ll look at five fantasy football sleepers in the NFC West to keep your eye on.

Does Gerald Everett count as one of the NFC West’s fantasy football sleepers?

Last year, Seattle Seahawks TE Gerald Everett played for the division-rival Los Angeles Rams. He was widely considered the TE1 on the Rams for fantasy, but his stats did not back that up. Like, not at all.

In 2020, Everett caught 41 of 62 targets for a meager 417 yards and a single touchdown. This averaged out to only 26.1 yards per game. By comparison, fellow TE Tyler Higbee caught 4 more touchdowns and averaged 34.7 yards per game. So why am I so high on Everett this year if he was so bad last season?

The short answer is because he changed teams. Now, both he and Higbee can truly see who is the better tight end. Last year, the Seahawks used three different tight ends — Jacob Hollister, Will Dissly, and Greg Olsen. None of them stood out, so it’s possible that Everett is the missing piece at the tight end position.

QB Russell Wilson likes to cook, in his own words, and having someone like Everett on the field gives Russ another ingredient in the kitchen. Tyler Lockett and DK Metcalf will get theirs, but Everett should see plenty of his own action as well if the offense does what it should do.

At his current ADP, Everett is basically free in most leagues. If you plan on streaming the position, the Seahawks face the Colts, Titans, and Vikings to start the year. It gets easier after that, so at least put him on your watch list if you decide to pass him in your draft, just in case.

Is Chase Edmonds still technically a sleeper for 2021?

I get it — it’s difficult to put Cardinals RB Chase Edmonds on a list of fantasy football sleepers if his ADP is in the sixth round of drafts, but hear me out. Edmonds is still underrated, even at his current cost.

Don’t hear what I’m not saying. I’m not saying that Edmonds will be a top-10 running back this year or anything. I’m just saying that the way that this offense likes to move the ball, the sixth round may still be too low for Edmonds.

Last season, Edmonds rushed 97 times for 448 yards and a touchdown. He also caught 53 of 67 passes for another 402 yards and 4 touchdowns. This was all while competing for touches with RB Kenyan Drake, who is now in Las Vegas.

The Cardinals brought in RB James Conner, but Conner is a far cry from Drake. For one thing, Conner has a longer history of injuries and could easily miss time. This means more reps for Edmonds to shine. Conner also plays more in short-yardage situations, allowing Edmonds to have full reign of the passing-down work. Conner is another RB, but he’s not true competition for Edmonds like Drake was.

All that said, I’d be pleased to grab Edmonds as my RB2 in drafts where I wait at the position. For me, even a sixth-round ADP feels like stealing when someone has a ceiling like his. Selecting Edmonds could very easily make your team a contender as soon as the draft is finished.

Could rookie Trey Sermon be a fantasy sleeper this year?

Once the 49ers drafted RB Trey Sermon in the second round, everyone wondered what they were doing. They already had a veteran presence at the position in RB Raheem Mostert. Did they really need to take another running back?

Obviously, the team thought so, or at the very least, they thought that Mostert couldn’t handle the workload alone. Mostert was injured a lot last year, so by drafting Sermon, the 49ers said “enough.”

Sermon is going as a flex or RB3 option in most drafts, which I think feels pretty good at the moment. However, the reason he’s on this list of fantasy football sleepers is that he could easily be a league-winner down the stretch if he wins the job. Getting someone that changes your fantasy trajectory in the eighth round of your draft is how you win titles.

In 2020, RB Jeff Wilson led the team with 600 rushing yards, but he’s expected to miss the start of the season due to injury. Second on the team was Mostert with 521 yards, who we already mentioned had injuries of his own. The third-leading rusher was RB Jerick McKinnon with 319 yards, who is now with the Chiefs.

Are you seeing the pattern? The path to lead a high-powered rushing team in touches is well within reach for Sermon. He could become this year’s Jonathan Taylor but without the price tag. Draft him to start on your bench, and you’ll be sitting pretty come November — trust me.

The Rams have two players on my list of fantasy football sleepers for 2021. The first of which is their newly-acquired quarterback in Matthew Stafford.

QB Jared Goff led the team out of the huddle last year, but the team traded him to the Lions in exchange for Stafford. They clearly wanted to go in a different direction.

Stafford hasn’t been on a team with this kind of firepower in a while, but his ADP isn’t reflecting his true potential, even at QB11. Stafford has the talent to be the QB1 overall, and I think the Rams are poised to show us exactly that this year.

As mentioned earlier, TE Tyler Higbee had to scratch and claw for every target he saw last year. With Everett gone, Higbee should see a boost in an offense that’s ready to explode.

I’ve been on the Higbee train for a while now but seeing his ADP in the 11th round just screams value to me. At that range, you’re likely picking up fliers on anyone that you think can help during your byes, but Higbee is a full-time starter at the TE position.

The Rams added a lot of offense with the trade for Stafford and didn’t do anything to replace the loss of Everett. This is basically a double upgrade for Higbee, who should see a bigger portion of the targets on a better offense.

In terms of fantasy football sleepers, this is the best possible scenario. Anyone getting a bigger piece of a bigger pie stands out to me as someone I want on my team and not on my bench. If you miss out on one of the top-tier TEs, don’t worry. Just grab Higbee later and be thankful your league let it happen.