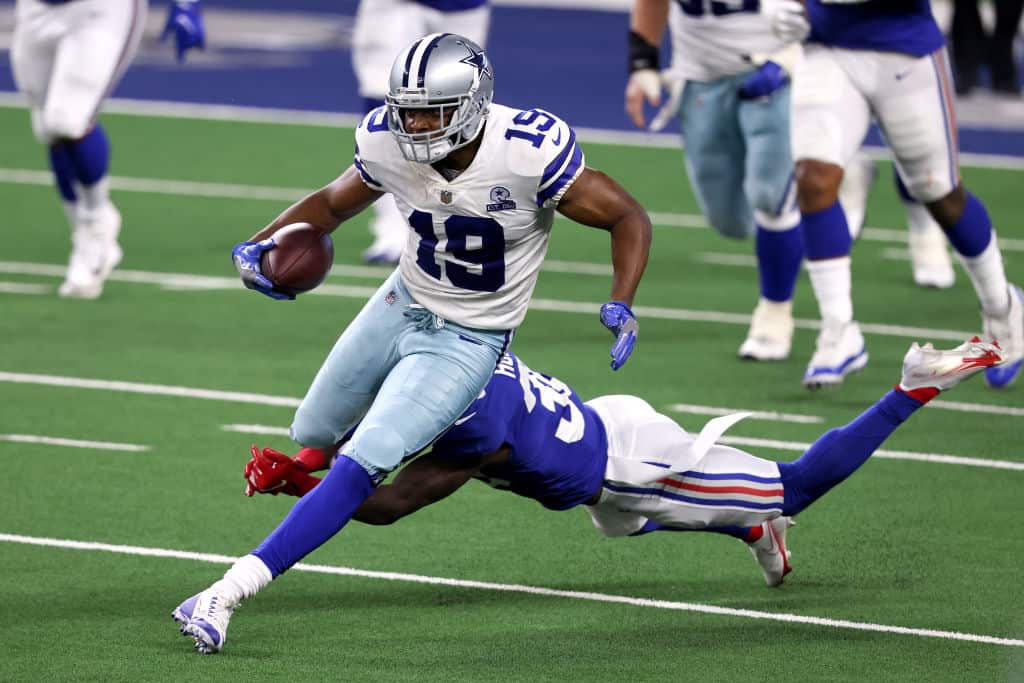 ARLINGTON, TEXAS - OCTOBER 11: Amari Cooper #19 of the Dallas Cowboys runs the ball past Darnay Holmes #30 of the New York Giants during the fourth quarter at AT&T Stadium on October 11, 2020 in Arlington, Texas. (Photo by Tom Pennington/Getty Images)
What's in this article? Click to show
Dallas has chosen to move on from Ben DiNucci and will start Garrett Gilbert on Sunday
Dallas has gone from one of the best offenses in the NFL to one of the worst since Week 5 due to poor play from the Cowboys QBs
Can Garrett Gilbert bring back fantasy value to players like Amari Cooper and other Cowboys WRs?
Want more fantasy football analysis and news?

The 2020 Dallas Cowboys have been an abject disaster in nearly every possible way, from injuries and underperforming players to guys going to their preferred media reporters to give “anonymous info.” A team that we thought would have been a fantasy football gold mine has turned into a wasteland over the last week weeks. The Cowboys have now decided to bench rookie Ben DiNucci and try their luck with QB Garrett Gilbert under center, coming into their hardest challenge of the season in Week 9 against the undefeated Pittsburgh Steelers. Knowing the talent on this roster with guys like Amari Cooper, CeeDee Lamb, and Michael Gallup, can Garrett Gilbert bring fantasy value to any of these Cowboys WRs moving forward?

In his first start of the year, Ben DiNucci did not impress the coaching staff or give any impressions that this is someone who could carry the torch until Andy Dalton makes his return. Initially, Dalton was out due to a concussion he suffered in Week 7 on an illegal hit by Washington’s Jon Bostic and has been in the concussion protocol. However, on Tuesday, it was reported that Dalton has tested positive and is on the reserve list, guaranteeing his absence for Sunday due to league guidelines.

DiNucci completed 21-of-40 passes for 180 yards with four sacks and two lost fumbles in his first start, a 23-9 loss to the Philadelphia Eagles. Knowing they are about to take on the arguably best team in the NFL, Owner/GM Jerry Jones and HC Mike McCarthy believe that DiNucci is not the answer against the NFL’s top defense.

“Obviously Ben’s experience Sunday night, I think we all knew the facts going into it, the speed of the game, the challenges that were presented to him,” McCarthy said. “I just felt with the opponent that we’re playing, we need some more experience at that position.”

Garrett Gilbert and Cooper Rush went through something of a competition during the week of practice, although Gilbert took most of the first-team snaps. If you are unfamiliar with Gilbert, you aren’t the only one.

For those who remember the AAF, Garrett Gilbert’s name might sound a bit more familiar as he was the Orlando Apollos’ QB, which was the best team in the AAF at the time of its closure. He played under head coaching legend Steve Spurrier and was the league’s leading passer. Gilbert threw for 2,152 passing yards with 13 TDs and only three INTs. Orlando also led the league in total offense. Garrett Gilbert’s fantasy outlook could be interesting if he could perform anything like he did in the AAF.

The impact of QB Dak Prescott’s loss on the Cowboys’ offense can’t be understated.

The Cowboys ranked third in the NFL in scoring in the five games Prescott started, averaging 32.6 points per game. In the three games since the Cowboys have scored a total of 22 points. In the past three games, their only touchdown was a 1-yard pass from Dalton to Amari Cooper with 2:48 left in a blowout loss to the Cardinals.

Let me repeat this; they have scored one touchdown in their last 37 offensive drives. There is only a three-point difference between the Cowboys offense in the previous three weeks (22) and the New York Jets (19) since Prescott was injured. They are also averaging just 25 yards more of total offensive yards per game (250) than the Jets (225). The big difference between these teams is that one is full of fantasy talent, and the other has Adam Gase. For the Cowboys, this is inexcusable.

Take Amari Cooper’s fantasy season, for example. For arguably the first time in his career, Cooper was a consistent fantasy performer. Cooper was a locked-in WR1 when Prescott was with the team, ranking inside the top six in PPR formats over the first four weeks of the season and leading the Cowboys WRs in virtually every stat.

Since then, it has been nothing but up and down fantasy performances. From Week 5 onwards, Cooper has averaged 13.6 PPR points, but in two of those games, he was held under 4.2 points and 23 yards receiving. While we know the talent is there for Cooper, there is so much volatility in his performances with Cowboys QBs other than Prescott, which has made him extremely difficult to trust from a fantasy perspective.

Can Garrett Gilbert bring back fantasy value to players like Amari Cooper and other Cowboys WRs?

It’s going to be difficult to view Amari Cooper as anything more than a fantasy boom-or-bust WR3 while Dalton is out, and I don’t think you will ever feel good about playing him or any other Cowboys WR with Garrett Gilbert as the Cowboys QB. He’s definitely talented enough to overcome poor QB play at times, but the expectations need to be adjusted so long as the Cowboys are playing hot potato at quarterback.

Unfortunately, Amari Cooper is not alone in his fantasy struggle. When it was Prescott under center, there was more than enough volume to sustain all three receivers as well as Ezekiel Elliott and even Dalton Schultz. But with him out of the lineup, it basically cut their respective fantasy value in half.

Elliott has gone from a rock-steady top-three running back to the RB12 on the week for me based on volume alone, even though he is playing a brutal Steelers defense. The Steelers defense ranks 26th in Defense Points Against Consistency (DPAC) with a score of 8.32, meaning they are a matchup that you want to avoid in fantasy unless you have someone who is a weekly must-start. Given his talent, it is tough to bench Elliott, but the upside is gone unless he can find his way into the end zone, something Pittsburgh has allowed only five times.

Even in a game where I expect a negative game script very early on, I can’t see starting Cowboys WR CeeDee Lamb in fantasy as anything more than a WR4. Michael Gallup is currently unstartable even though he is coming off a game where he saw 12 targets, leading the Cowboys WRs. I am not buying last week being a change in his fortunes, as he remains one of the biggest fantasy disappointments of 2020.