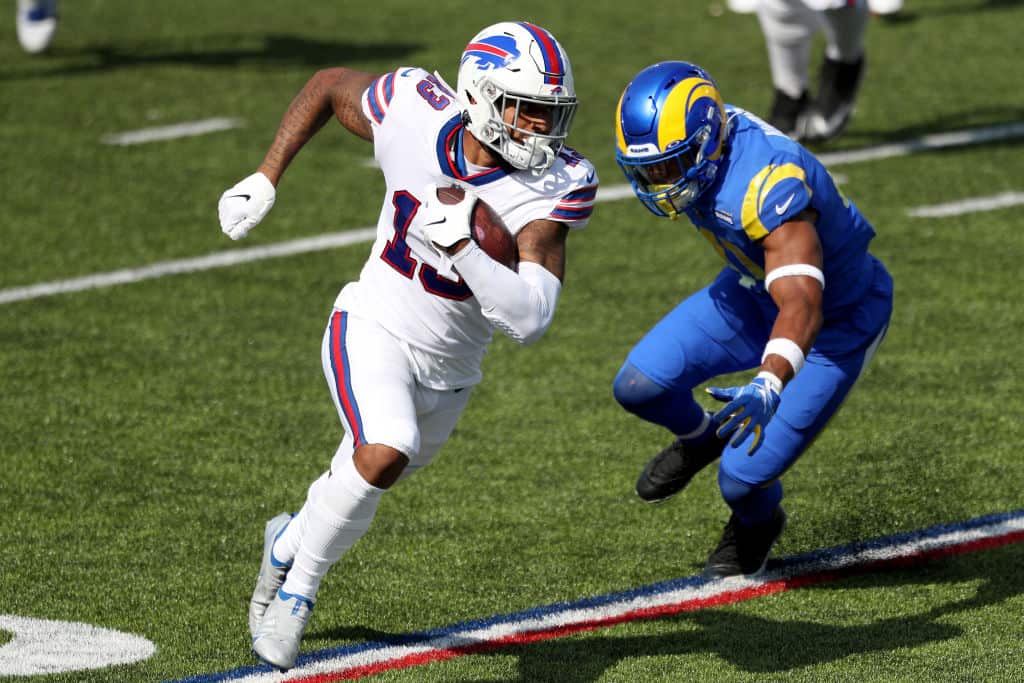 ORCHARD PARK, NEW YORK - SEPTEMBER 27: Gabriel Davis #13 of the Buffalo Bills runs with the ball as Kenny Young #41 of the Los Angeles Rams attempts to tackle him during the third quarter at Bills Stadium on September 27, 2020 in Orchard Park, New York. (Photo by Bryan M. Bennett/Getty Images)
What's in this article? Click to show
Davis was on the radar even before the season started
Bills WR Gabriel Davis continues to produce as a rookie
Brown was activated from the IR but won’t return until Week 16
Can you start Gabriel Davis in fantasy for Week 15 for the semifinals?
Want more fantasy football analysis and news?

Heading into your Week 15 fantasy football semifinals, Bills WR Gabriel Davis can add some much needed upside to your roster. Davis is quietly having a great end of his season and is likely on your waivers in most leagues. Heading into a matchup against the Denver Broncos, is Gabriel Davis someone you should add in Week 15 if you need the extra push for your fantasy team?

Davis was on the radar even before the season started

Even before the season started, there was hype around Bills camp for Gabriel Davis, the rookie out of UCF. John Brown said back in training camp that Davis knew the playbook better than the veterans. That’s an interesting comment that we will circle back to in a second.

The Bills drafted Davis in the fourth-round to add more offensive weapons for Allen along with the big-name trade that brought in Stefon Diggs. Davis brings something you can’t teach and was lacking in the WR room: size.

Gabriel Davis is the biggest WR they have at 6’2″. While that isn’t tall compared to most NFL teams, when the other guys on your team are Diggs (6′), John Brown (5’11”), and Cole Beasley (5’8″), that stands above the rest. Literally. Part of this is why he was one of my favorite sleepers for the 2020 season, especially in dynasty.

Gabriel Davis was a solid performer at UCF

They also knew they were getting production in the draft pick. In his three years at UCF, Davis had 152 receptions for 2,447 yards and 23 touchdowns. As a junior, he was first-team All-American Athletic Conference while setting a school single-season record with 1,241 yards. His 17.24 yards per reception helped Davis lead the team with 22 plays of 20 yards or more. By the time his career was up, he had eight games of 100 or more receiving yards.

Bills WR Gabriel Davis continues to produce as a rookie

In a star-studded rookie class, do you know offhand who the leaders are in touchdowns so far? Chase Claypool of the Steelers is the leader with eight. Justin Jefferson, who is already one of the best deep threats in the NFL, is second with seven. Sitting in third is Gabriel Davis with six. Yes, that is also more than Stefon Diggs with five through 13 games played.

Davis has a quietly impressive stat line of 28 receptions on 47 targets for 441 yards and six touchdowns as a rookie. While this is low for someone I am saying is a fantasy option in Week 15, we need some context for Gabriel Davis. It goes back to Brown’s comment before the season that I wanted to touch on later.

When John Brown out is, Gabriel Davis seems a large boost in production

When John Brown has been out with an injury, Davis has been phenomenal. He becomes the clear WR3 for the Bills and their new passing attack of 2020.

Here are his snap percentages in the games that Brown hasn’t suited up. 100%, 98%, 97%, 97% — and 83% of the snaps in the win over Pittsburgh last week. In the five games without Brown, Davis has 15 receptions on 28 targets for 235 yards and three touchdowns. He’s had at least 68 yards in three of the last five games while scoring a touchdown in four of the last five games. This includes a touchdown in each of his previous three games. In the last three weeks, Davis is the WR20 in PPR formats.

Guess who is has already ruled out for Sunday? John Brown.

According to the NFL’s transactions report, the Bills designated receiver John Brown to return from injured reserve Tuesday. The team placed Brown on injured reserve on November 28th with an ankle injury.

“You play wide receiver, you want to be playing at full speed, and that’s what we expect when he gets back,” McDermott said.

With Brown out for Week 15, everything is setting up for Gabriel Davis to have another reliable fantasy performance.

Can you start Gabriel Davis in fantasy for Week 15 for the semifinals?

When Brown is out, Gabriel Davis is averaging 11.4 PPR points and 14.5 in his last three. However, this week won’t be the easiest matchup. While Denver has been poor at stopping the run since Week 7, their pass defense has held firm.

However, injuries are starting to pile up for Denver. The Broncos are dealing with injuries to four of their top five cornerbacks, which has led to them starting rookie Michael Ojemudia and 2015 undrafted free agent De’Vante Bausby. Denver also sits 12th in fantasy points allowed to WR per game at 35.35. For a team that has played the Steelers, Tampa Bay, Kansas City twice, and the Chargers, that’s impressive.

Diggs and Beasley both have favorable matchups this week, and it’s projected to be a close game by Vegas odds (Bills -3). Davis likely isn’t going to see a ton of targets, but six to seven is in the realm of possibility. If he does, Gabriel Davis has a solid chance to extend his TD streak to four games and end in the fantasy WR3 range in Week 15. He’s rostered in only 9% of Yahoo leagues at the moment, so if you need the help, you can likely find it on your waivers.