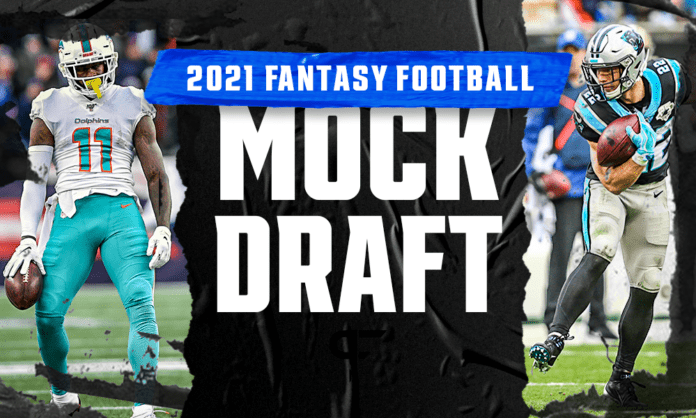 Fantasy Football Mock Draft: Should a tight end go in Round 1 in 0.5 PPR?

As training camps continue to push us closer to the start of the NFL's regular season, we review a 0.5 PPR Fantasy Football Mock Draft.

With training camps underway and the first preseason game less than a week away, we have officially entered the greatest time of year — fantasy football draft season. To help you prepare, let’s run through a 0.5 PPR Fantasy Football Mock Draft and look at some potential targets and strategies for each draft slot.

How does a draft strategy change when you go from PPR to 0.5 PPR?

There is a growing subset of drafters who preach Zero RB. As much as I have pushed against it, it’s starting to grow on me a touch — at least the philosophy behind it. You target all the elite pass catchers and keep yourself out of the positional rushes when the rest of your league-mates fight and reach on RBs just to take an RB.

When you move back to 0.5 PPR, running backs, even those who are not 50+ target backs, have their value boosted from the volume of rushes. With receivers no longer gaining a massive advantage, we see running backs go hot and heavy in the first two rounds. Now, that does not mean a Zero RB approach can no longer work, but the advantage it could bring, assuming the draft falls right, is diminished.

For reference, this mock was run with a 1QB/2RB/3WR/TE/Flex roster format with a 10-team league and 0.5 scoring settings.

There should be no debate on who is the 1.01 in non-superflex fantasy drafts. In 2019, McCaffrey became the third player ever to eclipse 1,000 rushing and receiving yards in a single season.

The only player who is in the discussion to be in the same tier as McCaffrey is Vikings’ RB Dalvin Cook. Since 2019, Cook has recorded 3,572 total yards and 30 touchdowns, finishing as the RB5 and RB3, respectively, in PPR formats during that time. Cook is also instrumental in the passing game, averaging 58.5 targets and 440 yards per season.

Insert text here about volume catching up to Derrick Henry.

The guy is just a different breed, winning the rushing title in back-to-back seasons. In that time, he finished as an RB2 or better in 71% of his weeks (22) and an RB1 in 58% (18). When shifting to 0.5 PPR, the lack of targets becomes less of a sticking point, especially when selecting Henry in the top three of a 0.5 PPR Fantasy Football Mock Draft.

With the recent news of Michael Thomas and him potentially missing close to half the season, the Saints’ offense begins and ends with Alvin Kamara.

Since coming into the league, Kamara has averaged 21.8 ppg, finishing 83% of his games as an RB2 or better (65% RB1). Better yet, he has received 270 opportunities per season. Even if his rushes are slightly hampered due to Taysom Hill or Latavius Murray, Kamara should set a new career-high in targets (107 in 2020).

In a “what did you do for me lately” business, Saquon Barkley has more pressure to succeed in 2021 than ever in his career. Barkley dominated his rookie season to the tune of over 2,000 total yards and 15 touchdowns. He missed three games in 2019 but still cranked out an RB10 performance.

In 71% of his games, Barkley has scored 16+ PPR points, which is the kind of floor that’s hard to find. He is coming off an ACL tear, so you need to pay attention to training camp news regarding his progress as Week 1 draws closer.

Adams is as consistent as it gets, finishing as a WR1 in 54% of his weeks and as a WR2 or better in 78% of his games (41). There are no weaknesses in his game. Adams should be the first non-RB taken in 0.5 PPR fantasy football mock drafts.

Here is the first big shakeup in 2021 mock drafts. Typically, you would never see a TE in the first round of fantasy drafts. However, Travis Kelce is the exception.

Once the top-tier RBs and Adams are gone, Kelce is fair game given the advantage he gives offers your roster even in 0.5 PPR formats. Kelce has been the overall TE1 for five straight seasons. Additionally, he’s finished 78% of his games as a TE1, including 28 of 31 active games since 2019. He generates points equivalent to a high-end WR1 at a position that lacks upside.

Why have we all forgotten about Ezekiel Elliott? Is there a reason why he is no longer being considered one of the elite RBs in the NFL? All he has done is finish as the RB2, RB12, RB5, RB3, and RB9, respectively, averaging 1,276 rushing yards, 391 receiving yards, and 11.2 total touchdowns per season.

In 2020, with Dak Prescott in the lineup (Weeks 1-5), Elliott was the RB3 (22.3 ppg). He averaged 107 total yards and a touchdown on 24.4 opportunities per game during that time. Elliott has top-three upside on what could be the best offense in football.

While Adams is the WR1, Tyreek Hill is the WR1B. Traditionally seen as a boom-or-bust player, Hill was one of the most consistent WRs last season. He finished inside the top 24 in 73.3% of his games (highest amongst WRs).

Well, this feels dirty. I hate myself for it as a card-carrying founding member of the Jonathan Taylor lover’s club, but the recent injury to QB Carson Wentz has the Colts’ offense in a very precarious place. We have no idea what the damage is or how much time he might miss while his foot injury is evaluated.

Take away Wentz, and the Colts are looking at Jacob Eason as its starting QB. Eason has not played a meaningful snap since December 2019 against Boise State.

There is no question at all — Taylor is special. In Weeks 13-17, Taylor was the RB1 in fantasy with 125.3 points while racking up 651 rushing yards and 8 total touchdowns. The Colts open their season at home against Seattle in Week 1, then the Rams in Week 2.

From Weeks 3 through 5. they are on the road at Tennessee, Miami, and Baltimore. Those teams went 54-26, and four of five were in the playoffs. Even with Wentz, that’s brutal. With Eason, it’s nearly insurmountable.

While I would never avoid a player based on only a few games, there are safer options than Taylor in the first round. Remember, you can’t win in Round 1, but you certainly can lose it.