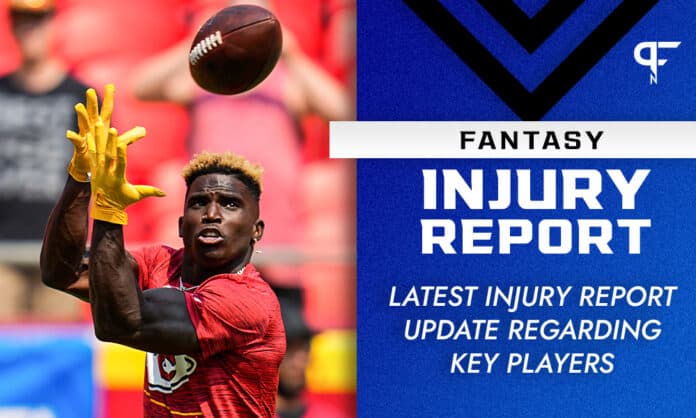 Following Week 5, what injury updates are we tracking, and what fantasy football players do we expect to appear on Week 6 injury reports?

While rankings and projections are beneficial, few things are more important in fantasy football than following injury updates. Injuries not only impact the player in question but the teammates and the offenses around them. Here’s an update on some critical injury reports to watch and their fantasy football impact.

Tom Brady is dealing with some pain in his right thumb. There’s a better chance that the Texans run the table the rest of the season and win the Super Bowl than Brady not playing on Thursday. He’ll be out there.

Jacoby Brissett was limited Wednesday with a hamstring issue. He’s fine. The only reason Brissett wouldn’t play Sunday is if Tua Tagovailoa returns.

Joe Burrow practiced in full Wednesday but won’t speak to the media. According to Zac Taylor, he’s on “voice rest” after suffering a throat contusion last week. Burrow may have to avoid speaking much over the next few days, but he will be on the field when the Bengals meet the Lions Sunday.

Justin Fields practiced in full Wednesday. He’s all good to start against the Packers on Sunday.

Daniel Jones did not practice Wednesday as he works his way through the concussion protocol, but there is good news. According to Jordan Ranaan of ESPN, Jones is progressing well, and much like Teddy Bridgewater last week, has a decent chance to get cleared in time to play without missing a game.

Something looked off with Kyler Murray last week, and now we’ve learned he’s dealing with a right shoulder issue. Murray was limited Wednesday and is at no risk of missing Sunday’s game in Cleveland. But Murray hurt the same shoulder last season, and despite his claims to the contrary, it clearly hampered his productivity. Fantasy managers have to hope the same story isn’t about to repeat itself.

Ben Roethlisberger didn’t practice Wednesday, which will probably be the norm going forward. The 39- going on 50-year-old is managing pectoral and hip issues. He’ll return to practice Thursday and play Sunday.

Tua Tagovailoa has been out since Week 3 with fractured ribs. On Tuesday, the Dolphins designated him to return from injured reserve, beginning the three-week clock to activate him. Tagovailoa practiced Wednesday, and if all goes well, he is set to make his return against the Jaguars in London on Sunday morning, according to Ian Rapoport of NFL.com.

Unsurprisingly, Saquon Barkley did not practice Wednesday. He won’t practice at all this week and is out for Sunday’s game against the Rams. Devontae Booker will lead the Giants’ backfield until Barkley can return.

Chris Carson did not practice Wednesday due to his neck injury. The plan is for him to practice Thursday, but that is no guarantee — nor is his status for Sunday night’s game in Pittsburgh.

Nick Chubb did not practice Wednesday with a calf issue. Chubb played the entire game last week, so this feels like veteran maintenance. But it’s a new injury for Chubb and something to monitor Thursday and Friday.

Dalvin Cook was limited at Wednesday’s practice as he continues to work through his lingering ankle sprain. Cook was trending towards playing last week before the Vikings decided to rest him. It remains to be seen whether Minnesota will hold Cook out one more week to allow him to rest through their Week 7 bye before returning at 100% in Week 8.

Chase Edmonds was limited Wednesday with the same shoulder injury that rendered him a game-time decision last week. Edmonds ultimately played and made it through the game no worse for wear. Barring an aggravation later in the week, he’ll be ready to rock on Sunday.

Antonio Gibson did not practice Wednesday. This has become the normal weekly routine as Washington exercises caution with Gibson’s shin injury. He should practice Thursday and Friday to play Sunday against the Chiefs.

Melvin Gordon didn’t practice Wednesday, which is becoming a weekly routine. He will likely return to a limited practice Thursday and play this week, just as he did in Week 5.

Damien Harris did not practice Wednesday due to bruised ribs. He will have to return to at least a limited practice Thursday or Friday to have a shot to play this week. Rhamondre Stevenson would take over early down work if Harris can’t go while Brandon Bolden maintains his role as the passing-down back.

A wrist and knee injury kept Kareem Hunt out of Wednesday’s practice. These are new injuries for Hunt and worth monitoring going forward. It’s likely just veteran maintenance, though.

Aaron Jones was limited at Wednesday’s practice with his lingering ankle issue. The Packers are just managing his reps. He’s fine and will be on the field Sunday against the Bears.

Christian McCaffrey remained limited at practice on Wednesday, just like all of last week. I initially thought McCaffrey would return this week, but Matt Rhule said CMC is 50-50 and will likely be a game-time decision. That’s not the level of optimism I expected. We’ll see if Rhule’s tune grows more positive as the week progresses.

Joe Mixon was limited at Wednesday’s practice as he continues to recover from his Week 4 ankle sprain. That’s an incredibly encouraging sign after Mixon didn’t touch the practice field until doing a little work on Saturday last week. With Samaje Perine on the reserve/COVID-19 list, fantasy managers would love for Mixon to be near 100% for a dream matchup in Detroit.

I am just going to copy and paste my D’Andre Swift injury assessment from the past four weeks. He was limited on Wednesday. He’ll be limited Thursday and Friday. He’ll be listed as questionable. And he will play. Stop playing games, Dan Campbell.

Campbell’s preferred running back, Jamaal Williams, was also limited at Wednesday’s practice due to a hip issue. He will play Sunday and continue to see way more work than he has any right to.

After touching the ball 18 times last week, Damien Williams apparently walked out of the Bears’ win over the Raiders with foot and knee injuries. The good news is he was limited at Wednesday’s practice, which puts him on track to play Sunday. However, Khalil Herbert carried the ball 18 times and could see increased work if Williams is banged up.

Next Page: WRs and TEs