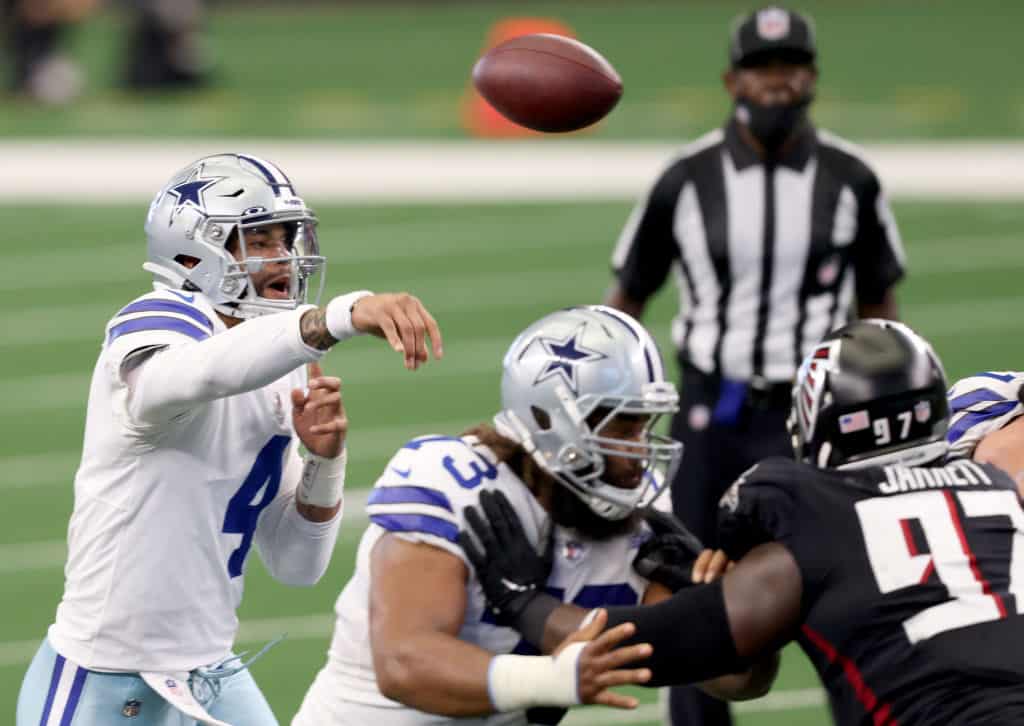 (Photo by Tom Pennington/Getty Images)
What's in this article? Click to show
Dak Prescott willed the Cowboys offense to victory
CeeDee Lamb is a WR1 already
Mike McCarthy is going to be aggressive

The Atlanta Falcons snatched defeat from the jaws of victory. There’s no other way to put it. The Dallas Cowboys came out and fumbled three times in a 10-play span in the first quarter and swiftly fell down 20 points. In golf, when the rest of the field plays poorly and gives shots away to the eventual winner, it’s called a crowning. The Falcons crowned the Cowboys in Week 2.

However, despite multiple things to be concerned about it’s not all bad. Although there was undoubtedly a lot of negatives surrounding the Cowboys Week 2 performance, it’s important to move forward and take a positive outlook toward the future. The Cowboys won this week, and even though it was the ugliest win I can personally remember from a Cowboys team, it’s still a positive.

One of the biggest criticisms of Rayne Dakota Prescott is that his detractors don’t feel he is an elite quarterback because he’s unable to raise the level of the talent around him to bring offensive success. He’s unable to put the team on his back like Greg Jennings with a broken leg. Those detractors are surely pretty quiet after that performance.

This week, Prescott averaged 9.57 YPA on 47 attempts for 450 total yards in a game where the Cowboys needed every single one of those yards. He also showed what a weapon he is as a runner, tacking on three rushing touchdowns to his resume for the game. For the second week in a row, when the Cowboys pushed the pace offensively and went up-tempo, Prescott shined.

Given Prescott’s presence off the field and the love his teammates have for him in the locker room, disliking him at this point is silly at best, and ignorant at worst. His work in the intermediate areas in the middle of the field is sublime, and he was the most prolific deep passer in the NFL last season.

CeeDee Lamb is a WR1 already

The talk from camp is that this young man looked different. It certainly has looked that way in the first two weeks of the NFL season. Even his ability to break up what looked to be an interceptable pass on 2nd-and-4 when down 15 points looked like veteran savvy.

But it’s the technical side of Lamb that is so darned exciting. He isn’t as big or explosive as Amari Cooper, and he’s not as nuanced or violent a route runner as Cooper. But his ability off the line is not that of a first-year player.

On the above play, he gives an outside release initially, stems it back inside before the slot cornerback can get his arm out there to jam him, and then proceeds to step on the toes of the defender. But it’s his nuanced hands at the breakpoint that allow him to separate here. He got a little liberal with the extension of his left arm as the defender tried transitioning, but with the hand fighting that was present on the play, that’s a tough call to make as a referee.

Maybe they were just getting one back from last week. Either way, Lamb’s presence within the offense is palpable. Heis already as heavily influential as any offensive weapon not named Ezekiel Elliott, and he has stepped up on every occasion so far.

Mike McCarthy is going to be aggressive

Good, bad, or ugly, we’ve already begun to see a trend of aggression with this McCarthy team. The first fake punt was designed well but executed poorly. The second fake punt looked ugly. We can question the decision to not just let Prescott and the offense stay out on the field for that attempt, but after too many years of debilitating conservatism, a little aggression is a pleasure to see.

The decision to go for two immediately probably doesn’t make sense analytically. From a common-sense standpoint, it doesn’t either. But the clarity that comes from that decision was refreshing from a 30,000-foot view.

If the Cowboys get the conversion, all they need is the extra point. Or you go balls to the wall and go for two and the win. If you don’t get it, you have to put your gas pedal all the way to the floor on both sides of the ball.