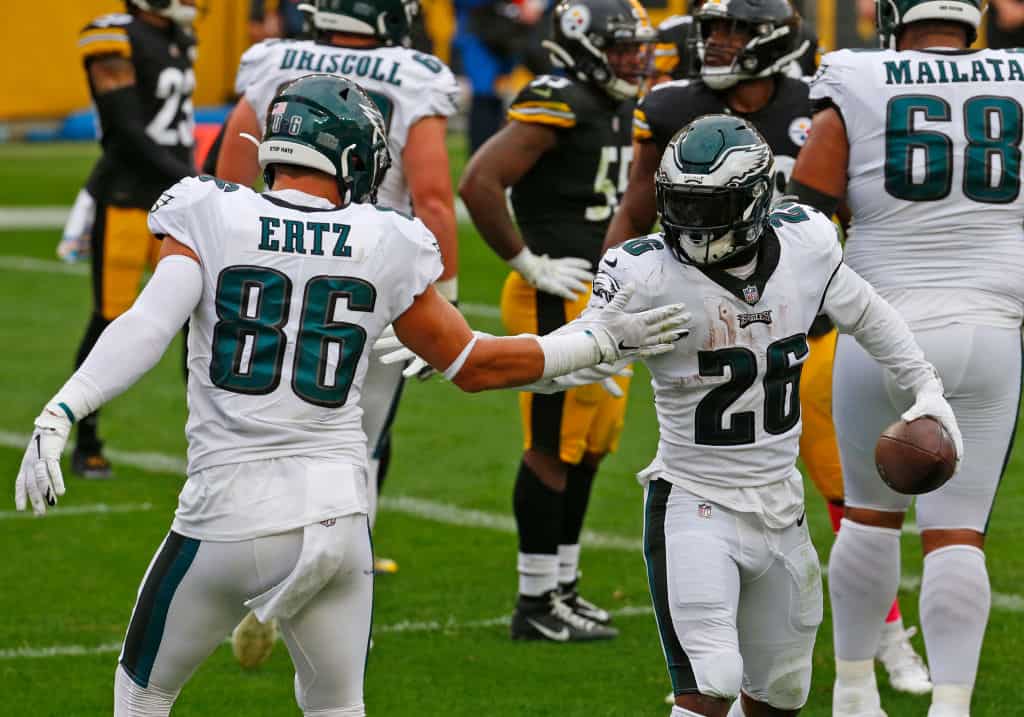 PITTSBURGH, PA - OCTOBER 11: Miles Sanders #26 of the Philadelphia Eagles celebrates with Zach Ertz #86 after rushing for a 1 yard touchdown in the first half Pittsburgh Steelers on October 11, 2020 at Heinz Field in Pittsburgh, Pennsylvania. (Photo by Justin K. Aller/Getty Images)
What's in this article? Click to show
Eagles RB Depth Chart: Can Miles Sanders have a productive fantasy day behind a patchwork OL?
Philadelphia Eagles WR Depth Chart: Which receivers might get more volume?
Eagles TE and QB Depth Chart: Will both Carson Wentz and Zach Ertz bounce back in Week 6?
Want more fantasy football news and analysis?

It’s déjà vu in the city of brotherly love as the Philadelphia Eagles enter their game with an injury report that is full of critical names. With so many players out, surely there is some sneaky fantasy football value to be found on the Eagles’ WR, RB, or TE depth chart as they take on the Baltimore Ravens.

If you look just at the Eagles’ WR depth chart, DeSean Jackson is out and will miss his third straight game. Alshon Jeffrey is also missing, having yet to play in a game this season. Honestly, I don’t know why the team didn’t place him on the PUP or the IR to begin with at this point.

In addition to those two receivers, you’ll also notice that the offensive line’s starting right side has also been ruled out as G Matt Pryor and T Lane Johnson will miss the game. This will be the Eagles’ fifth different offensive line in six weeks.

Eagles RB Depth Chart: Can Miles Sanders have a productive fantasy day behind a patchwork OL?

If you only looked at the box score from Week 5, you would think that Miles Sanders had a solid day against Pittsburgh, one of the best defenses in the NFL. Sanders’ 11 rushes for 80 yards and two touchdowns were enough for an RB3 performance with 23.9 PPR points. However, that is actually somewhat of a lie and not indicative of how the game went.

With 0:19 left in the first quarter, Sanders took a carry to the left side and gashed the Steelers for a 74-yard touchdown. That means 92.5% of his rushing total and 56% of his fantasy points for the day came on a single play. Outside of his long score, Sanders rushed 10 times, averaging 0.6 yards per carry. In fantasy, you take points how you can get them, but context is needed.

Sanders now faces off against a Ravens defense that allows just 3.61 yards per carry on the year and has allowed only one touchdown on 102 carries. That’s including matchups against Joe Mixon and Clyde Edwards-Helaire. Knowing this is such a stout run defense, Sanders needs to be heavily involved in the passing game for them to have any success. I have Sanders as a high RB2, despite a difficult matchup.

For Sanders, there isn’t much competition on the Eagles RB depth chart. Boston Scott is playing sparingly and has just six touches combined over his last three games. Unless there is an injury to Sanders, Scott does not have any value in fantasy.

After seeing 25 snaps in Week 1, Clement has combined for 16 offensives snaps over the last four weeks. Clement can be avoided in fantasy as he is buried on the Eagles RB depth chart.

When looking at the Eagles WR depth chart, there is no better person to start with than the person who exploded in this exact same scenario last week. The former UDFA from Old Dominion bounced around on the Lions, Packers, and then Eagles’ practice squads before having the best game of his career in Week 5. Fulgham caught 10 of his 13 targets for 152 yards and a touchdown.

Related | Christian McCaffrey & Mike Davis Fantasy Outlook: Is there room for both?

We talk about the benefits of “garbage time,” and the Eagles were in it nearly the entire second half. Down 31-14, they had no choice but to abandon the run and throw the ball as they tried, and eventually did, make a comeback. Mix that with a defense that blitzes the most in the NFL, and it left the Steelers’ secondary at a high risk of being exposed.

You can not expect lightning to strike twice for Fulgham. I expect Baltimore to use their rushing game to control the clock, and when the Eagles have the ball, pressure Wentz all game. Fulgham is a streaky at best WR4 and should be started with caution.

Greg Ward has been an inconsistent, low-upside fantasy option throughout the first five weeks of the season. He has seen seven, one, 11, seven, and five targets despite essentially being the only Eagles wide receiver to stay healthy this season.

Against a tough Baltimore defense and playing on a struggling Philly offense, Ward is little more than a touchdown-dependent flex play in deeper leagues. He’s gained 172 yards and scored twice on 22 catches this season.

There is a better chance that Arcega-Whiteside gets cut than ever posting a fantasy-relevant performance for the Eagles. It’s best to avoid him at all costs.

Eagles TE and QB Depth Chart: Will both Carson Wentz and Zach Ertz bounce back in Week 6?

Eagles QB Carson Wentz has not been a good fantasy quarterback so far this year, and he gets what could be his toughest challenge so far in Week 6 against the Ravens. Wentz has done just enough to get by as a QB2, completing 60% of his passes and throwing six touchdowns to go with nine interceptions. The one saving grace for Wentz is his three rushing touchdowns.

Wentz is going to be in for a long day with his patchwork offensive line. They face a Ravens defense that is first in blitz percentage, seventh in QB hurries, fifth in knockdowns and sacks, and second in overall pressures. Wentz tends to hold on to the ball too long and doesnt have receivers who will be able to win at the line, forcing him to waste precious time in the pocket. Wentz has an abysmal 40.9 QB Rating when under pressure this season, among the worst numbers in the league.

He will be a shaky at best QB2 this week. There are likely better streaming options out there floating on your waivers.

Breaking down the Eagles TE depth chart, you would think that Ertz would feast with everyone out in this offense and see all the work he could want. Maybe that is also an issue because the defense could focus on him. In a similar scenario in Week 5, Ertz saw six targets, catching just one of them for six yards. Ouch.

Over the last two weeks, Ertz has only 15 yards combined. For someone who was a top-four selection at the position in drafts, fantasy managers are panicking. I think Ertz might be as well after all the talk of deserving a big contract but failing to deliver thus far.

Currently TE15, I am honestly worried if I have Ertz. Until the receivers on his team get healthy or Dallas Goedert returns to the Eagles TE depth chart, Ertz as the focal point isn’t working. The problem is you can’t trade him as you would get maybe 40% back in terms of ROI, and there are only a handful of players who have the ceiling he does. At this point, we have to ride it out and hope for better days.