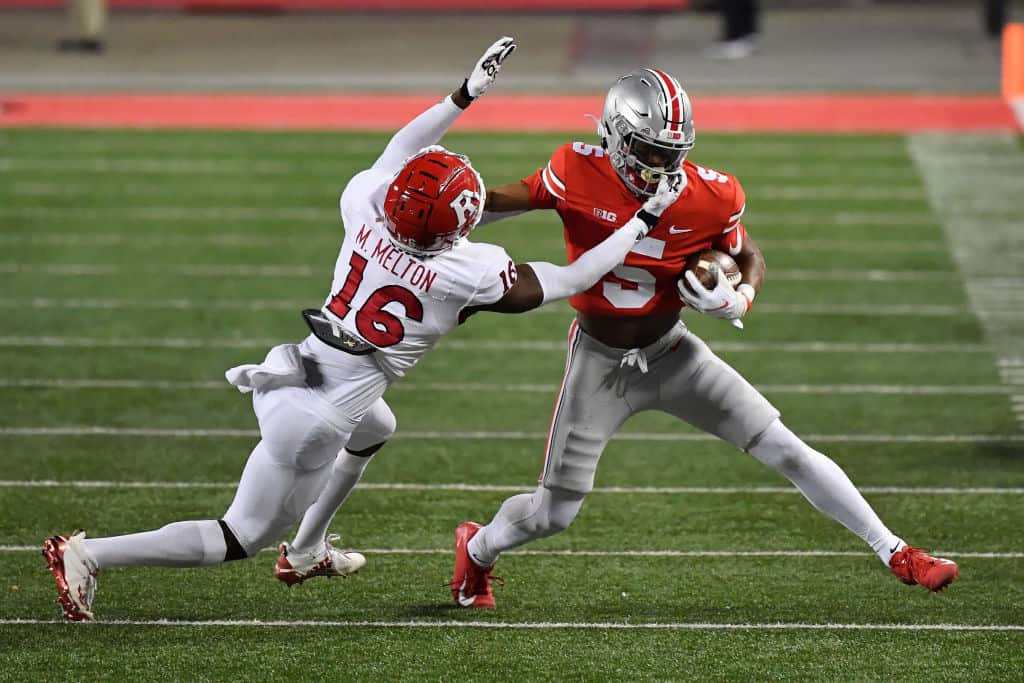 If you already find yourself enamored with the deep-dive of dynasty fantasy football, joining a Devy league is the natural progression for fantasy fanatics. Player values fluctuate as the college football weeks fly by, making our Week 13 dynasty rankings and Devy rankings for 1QB and Superflex dynasty leagues the most comprehensive set of rankings to date.

What’s the difference between Devy and dynasty rankings?

I know some of you are asking, “What is Devy fantasy football?” and how does it differ from regular dynasty rankings? Devy is a niche dynasty fantasy football game that incorporates the drafting of current college football prospects before they officially enter their name into the NFL Draft. Current college football players and incoming freshmen are typically eligible to be drafted in Devy drafts, but each individual league is slightly different, meaning you could even stumble across some Devy rankings with top high-school prospects included.

As you can see on our dynasty rankings table, we offer both 1QB and Superflex Devy rankings for an easier understanding of each player’s value. While 1QB is the more traditional form of fantasy football, our devy rankings are also useful in the ever-growing Superflex format. With the ability to choose between starting a quarterback or a skill-position player, quarterbacks are often valued much higher in our Superflex rankings.

Week 12 started with the long-awaited return of Purdue wide receiver Rondale Moore, but unfortunately, it ended with yet another elite devy prospect lost for the season. After missing the first four games of Purdue’s season, Moore made his presence known immediately with 15 receptions, 136 total yards, and a rushing touchdown.

The celebration of Moore’s return didn’t last long as the devy weekend turned sour with the unfortunate news that Penn State tight end Pat Freiermuth will undergo season-ending surgery this week. Freiermuth, a top-25 player in our Week 13 dynasty rankings for devy leagues, has likely played his last collegiate snap. Freiermuth considered entering his name into the 2020 NFL Draft, so it’s a near certainty that my current TE2 takes his talents to the 2021 NFL Draft.

With 998 career receiving yards over his first three seasons, Fryfogle started the season as a virtual unknown in the devy community. Despite all the ups and downs, the senior is an emerging talent in the Big Ten. The wide receiver’s receiving yardage output over the last three contests: 142, 200, and 218. Throw in six touchdowns over that same span, and Fryfogle has already eclipsed his 2019 numbers.

Saturday’s night slate featured the emergence of JT Daniels as Georgia’s starting quarterback, while quarterback Spencer Rattler flourished in Oklahoma’s 41-13 drubbing of rival Oklahoma State. On a night when Georgia’s rushing duo of Zamir White and James Cook combined for 28 rushing yards, Daniels passed for 401 yards and had a 4-0 TD-INT ratio. Over in the Big 12, Rattler was just as effective with 301 passing yards and four touchdowns. With South Carolina and West Virginia upcoming, we’re likely talking about both Daniels and Rattler again next week in our Week 13 dynasty rankings wrap-up.

Week 13’s college football schedule begins on Thursday with a couple of Mountain West showdowns, but our devy rankings likely won’t be needed until Friday. With the traditional post-Thanksgiving Friday slate featuring two contests between ranked opponents, our 1QB and SuperFlex devy rankings for dynasty leagues will be working overtime even before Saturday.

Friday’s slate begins with devy superstar Breece Hall and #15 Iowa State visiting #20 Texas, but that ranked matchup is merely an appetizer to the main course at 3:30 PM ET. That’s not meant as disrespect to Hall, a top-20 devy player in our Week 13 dynasty rankings, or the Texas Longhorns offense featuring plenty of talent. That statement is meant to stress just how important the other ranked contest is to the national landscape.

With the ACC Championship and a potential College Football Playoff berth on their mind, #2 Notre Dame travels to #25 North Carolina for the toughest remaining test on the Fighting Irish’s regular-season schedule. North Carolina’s defense is an exploitable matchup for Ian Book and the Notre Dame offense. Still, the Tar Heels have more than enough offensive firepower (Sam Howell, Javonte Williams, Michael Carter, Dyami Brown, Dazz Newsome) to keep up.

These Week 13 devy fantasy football and Superflex rankings for dynasty leagues were last updated on November 22nd, 2020. Players with an * are currently OUT due to injury or player/conference opt-outs. Below, you can sort the devy rankings by format, position, team, and rank. If you need to search for players or teams, you can do so using our filters below. Don’t forget to reset them to clear your board and start from the beginning.