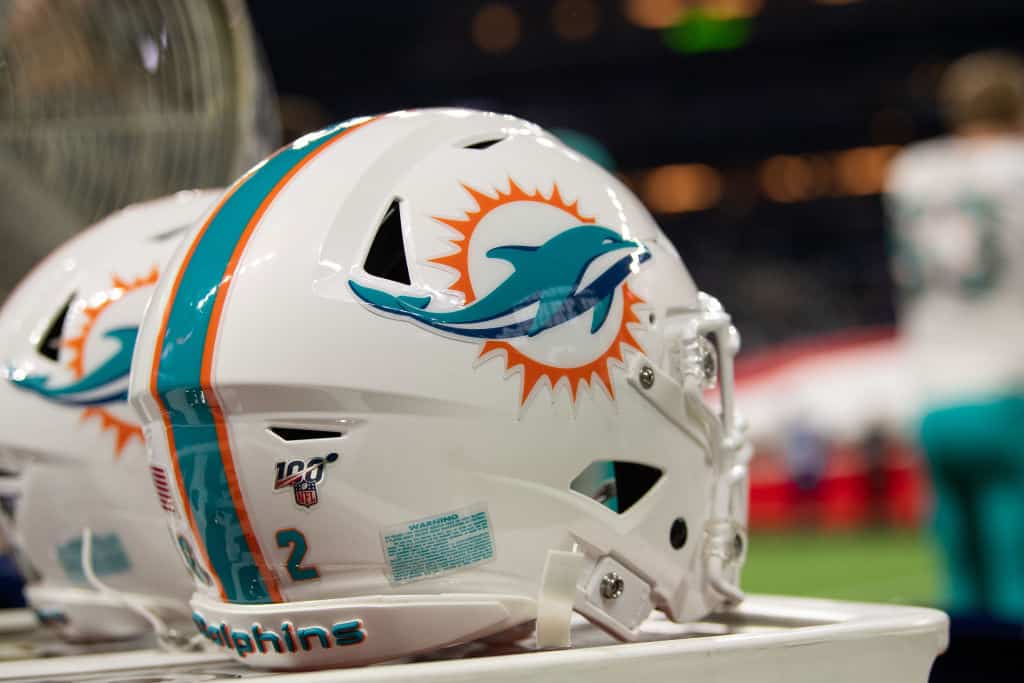 INDIANAPOLIS, IN - NOVEMBER 10: A Miami Dolphins helmet on the sidelines during the NFL game between the Miami Dolphins and the Indianapolis Colts on November 10, 2019 at Lucas Oil Stadium, in Indianapolis, IN. (Photo by Zach Bolinger/Icon Sportswire via Getty Images)
What's in this article? Click to show
Dolphins Pre-Senior Bowl 7-Round Mock Draft
Building for the future
Dolphins Pre-Senior Bowl 7-Round Mock Draft Analysis
Want more 2021 NFL Draft prospect news? Want to do your own mock draft?

With the team’s playoff hopes dashed for another season, it’s once again time for a Miami Dolphins pre-Senior Bowl 7-round mock 2021 NFL Draft. Despite the surprising success in year two of the rebuild, the Dolphins still have many areas that need improvement. This mock does its best to address those while setting up for the future, too.

Building for the future

This addresses the needs of today and building for the future of tomorrow. That’s how you build for sustained success. However, we’ve failed to get the Dolphins a running back in this 7-round mock NFL Draft, which may prove costly.

We can debate whether or not Miami Dolphins QB Tua Tagovailoa was ready to start when he did. We can debate if offensive coordinator Chan Gailey was holding Tua back. However, what shouldn’t be up for debate is that the Dolphins’ offense needs to be more explosive. Miami simply doesn’t have the playmakers it needs on that side of the ball to be the potent offense fans have been longing to see.

That’s where this Dolphins 7-round mock draft comes in. Getting a wide receiver in the first round should be of paramount importance to Miami. Tua needs weapons around him, and he needs wide receivers who can gain separation. Miami had some of the worst separation in the league last season. That won’t be an issue with Ja’Marr Chase in the wide receiver room.

Chase is currently the #2 prospect on our NFL Draft Insider Tony Pauline’s big board. Pauline calls Chase “a complete receiver” who is “fast, tough, and instinctive.” Having Chase still on the board at 18 would be a home run for Miami.

A big part of the plan to rebuild the Miami Dolphins focused on the linebacker group. Considerable effort was put into the 2020 free agency period to change the look and feel of Miami’s linebacking corps. There was a distinct “New England” flair to the group, with Kyle Van Noy and Elandon Roberts’ additions, both from the Patriots. It was a decent stop-gap effort, but there’s more work to be done with the group.

Nick Bolton can immediately give the Dolphins linebackers a jolt of athleticism and instincts missing from the current group. Bolton has been super productive in college football’s toughest conference. He has earned first-team All-SEC honors in back-to-back seasons and sits just outside Pauline’s top 50 at #51. Bolton also will turn 21 just over a month before the 2021 NFL Draft.

One of the most underrated aspects of the Miami Dolphins’ 2020 season was their pass rush. The pass rush had been a problem area for the Dolphins the past several years. Yet, I dare say they were good this past season. The addition of Emmanuel Ogbah paid big dividends for the team. Ogbah had nine sacks on the season — by far a career-high — and 21 hits on the quarterback.

However, there’s always room for improvement. You can never have too many guys who can get after the quarterback. Miami Hurricanes star Jaelan Phillips can absolutely get after the quarterback. Phillips had a breakout season for the Hurricanes this year in Gregory Rousseau’s absence and helped his stock immensely. Medical testing is going to be critical for Phillips, as there is a pretty extensive injury history. For that reason, he slips to the third round of our 7-round Dolphins 2021 mock NFL Draft.

The offensive line has been a topic of much discussion amongst Dolphins fans for years. The line was undeniably terrible last year. It’s probably not a stretch to say it was one of the worst offensive lines in Dolphins history, if not NFL history. The offensive line was noticeably better this season. That doesn’t mean there’s not room for significant improvement, however.

The Dolphins hit a home run in the second round of the 2019 NFL Draft when they took Alabama defensive tackle Raekwon Davis. Davis had 40 tackles this season, second only to Washington star Chase Young among rookies. He’s also a star off the field in his hometown, where Davis provided nearly 1,000 area kids with gifts this holiday season.

What would help keep Davis — and surprise standout Zach Sieler — filling up the stat sheet is another defensive tackle to help keep everyone fresh. Pittsburgh’s Jaylen Twyman didn’t play this season as an opt out, but he’s still an excellent prospect. Pauline has Twyman as his 61st-rated prospect and would be a solid value pick for the Dolphins at 81.

The loss of Reshad Jones was felt tremendously by the Dolphins this season. Miami undoubtedly missed the leadership Jones provided in the backend of the secondary. They also missed that ball-hawking play and tenacity Jones showed in run support. The Dolphins need to find a safety who can fill that void in the 2021 NFL Draft. Lucky for the Dolphins, this 7-round mock draft provides.

Andre Cisco may not be the complete safety that Oregon’s Jevon Holland is. He may not provide the kind of run support that Florida State’s Hamsah Nasirildeen can. Yet what he can do is provide a decent middle ground between the two. He may even have better ball skills than Holland. Cisco in the fourth round is a steal for the Dolphins and immediately makes the secondary better. He may not be Reshad Jones, but he’s outstanding in his own right.

When you get deep into the NFL Draft, it’s all about finding quality depth for your team. That’s an area the Dolphins have struggled with for years. If you can find a player you can develop into a quality starter, that’s even better. However, I believe that’s something that can be done with University of Northern Iowa offensive tackle Spencer Brown.

Brown is an absolute behemoth of a man, standing 6’9” tall and weighing north of 320 pounds. He may be the second-best offensive lineman in the FCS behind North Dakota State prospect Dillon Radunz. Therefore, Brown would provide the Dolphins with depth on the right side of the offensive line, and if he develops, could potentially give the team a massive right tackle to protect Tua’s blindside.

We’ve come to the final selection of our Miami Dolphins 2021 7-round mock NFL Draft. It should be no surprise that we’re going back to the well for one more wide receiver prospect. Ja’Marr Chase in the first round should do wonders for the Dolphins and their need for an explosive playmaker. However, the Dolphins need a total revamp of the position.

No one should expect Florida State wide receiver Tamorrion Terry to come in and compete for a starting job right away. He simply hasn’t developed into that kind of prospect. However, with the right coaching, he has some tools that can be developed into quality depth within the group.

At the end of the season, Miami was forced to trot out receivers who were pretty much pulled off the street. If they weren’t, they were college quarterbacks and running backs. Miami needs more depth at the position and more guys who aren’t entirely new to the situation. Terry checks both of those boxes and is a solid cap to our mock draft extravaganza.