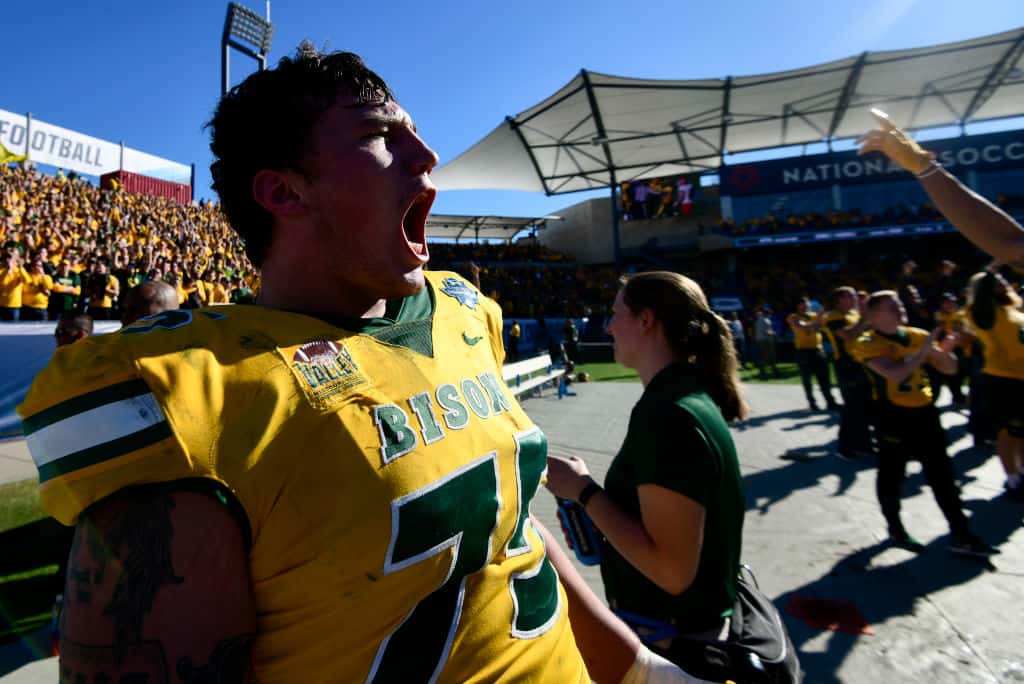 Offensive line talent is at a premium every year. The blocking unit is one of the most fundamentally crucial components of an offensive attack. Consequently, that unit has to be continuously well-stocked, for both the present and the future. The 2021 NFL Draft‘s offensive tackle class offers the opportunity to fulfill that need, and NDSU offensive tackle Dillon Radunz is one of the more exciting candidates for the draft.

Fires into blocks, shows explosiveness at the point, and plays with a nasty attitude. Keeps his feet moving in pass protection, gets his hands into defenders, and rides them from their angles of attack. Strong enough to turn defenders off the line run blocking. Keeps his head on a swivel and picks up stunts and twists. Quick out to the second level blocking in motion.

Negatives: Must improve his balance blocking on the move. Lacks great footwork off the edge. Not a dominant drive-blocking lineman.

Analysis: Radunz was an outstanding left tackle for North Dakota State and turned in three outstanding days of practice during January’s Senior Bowl. He offers possibilities at left tackle or even inside at guard in a zone-blocking system and comes with a large upside. While there may be bumps in the road early in his NFL career, Radunz will be a starter in the right system.

Dillon Radunz had a bit of a shaky start to the Senior Bowl on Day 1, but he improved drastically throughout the week. By Thursday, he was one of the best linemen there. His athleticism-length combination clearly gave him an advantage against many linemen, and he also maintained a strong base and smooth footwork to supplement those traits.

From an optics standpoint, Radunz weighed in over 300 pounds, and also showcased an ability to play at guard. Those factors combined should strengthen his status as a Day 2 prospect.

Ever since Carson Wentz was drafted by the Philadelphia Eagles second overall in the 2016 NFL Draft and won the Super Bowl a year later, the North Dakota State football program has kept building a strong national reputation. That reputation has since been strengthened further by the emergence of future first-round pick Trey Lance at quarterback.

That said, there’s more to pay attention to than quarterback for the Bison. In fact, one offensive lineman has similar early-round aspirations. Dillon Radunz naturally doesn’t have as much name recognition as the signal-callers. However, from a positional standpoint, he’s played at a similar level over the past three seasons.

Interestingly enough, Radunz wasn’t supposed to be an offensive tackle. He was originally recruited as a two-star defensive end prospect out of Becker, Minnesota. He signed with the renowned Bison program, where head coach Matt Entz initially envisioned Radunz as a 3-tech defensive lineman. However, Entz soon saw Radunz’s potential as a blocker and instead rostered him as a tackle. To be cliche, the rest is history.

Coming into college football at just 265 pounds, Radunz redshirted the 2016 season, intent on adding to his frame. He got his chance to earn playing time on the line the next year. However, after logging just fifteen snaps, the NDSU offensive tackle suffered a torn ACL, ending his 2017 campaign prematurely.

Normally, the ACL tear would be a red flag on Radunz’s record. But Radunz came back with a vengeance. He recovered in time for the 2018 season and started all fifteen games at left tackle in a championship-winning season. He earned second-team All-Missouri Valley Conference honors for his performance. He’d even take his game up one more notch in 2019.

Radunz’s redshirt junior season saw him become a truly elite FCS offensive tackle. Protecting the blindside of Trey Lance, Radunz did not allow a single sack and logged 63 knockdowns. He earned recognition as a consensus FCS first-team All-American, as well as a first-team All-Conference selection. Dillon Radunz could have feasibly attracted interest in the 2020 NFL Draft, but he opted to stay in school and solidify his stock.

Unfortunately for Radunz, the extenuating circumstances in the world complicated the 2020 football season. The FCS wound up moving its football season to the spring and rescheduled its championship for April and May. This obviously presented a scheduling conflict for FCS draft prospects such as Lance and Radunz. Thus, the Bison scheduled a one-game showcase in October against the Central Arkansas Bears.

The Bison won the game against the Bears by a score of 39-28, and Radunz was an under-the-radar catalyst for the team’s offensive success. In the running game, Radunz consistently moved defenders across the field and broke open lanes. In pass protection, his mobility and length proved to be too much for his opponents. Although the Bison remain set to play in the spring season, Radunz will not join them. He’s off to the 2021 NFL Draft, along with his quarterback Trey Lance.

It’s no coincidence that the North Dakota State Bison have dominated the FCS with Dillon Radunz at left tackle. There are a lot of other factors, including their healthy pipeline at quarterback. But Radunz has been one of NDSU’s best players for the better part of three years, and he’s a legitimate draft prospect this cycle.

Watching Radunz’s tape, it’s clear that he has the necessary tools to succeed. He’s near 6-foot-6 and over 300 pounds, with a thick, dense lower body and a long, imposing wingspan. Radunz is an excellent athlete as well. The NDSU offensive tackle shows off his impressive athletic traits as both a run and a pass blocker, although they’re more overt in the running game.

Radunz is a tremendously exciting run blocker. The NDSU offensive tackle has solid get-off at the line of scrimmage, and he actively engages defenders with his length. Although his upper body is less naturally powerful or dense, Radunz effectively uses his length as a conduit to convert his momentum into power.

When he has open space and has a full head of steam, he can barrel over second-level defenders and escort them away from the play with ease. Radunz also showcases the awareness and balance to disengage and stack blocks when necessary.

Dillon Radunz as a pass blocker

Dillon Radunz’s finisher trait doesn’t show up as often on pass blocking reps, but his ability to use his length as a foundational trait does. Radunz plays with good leverage as a pass blocker and utilizes his length well, and this mitigates a lot of concerns surrounding his size.

Denser defensive linemen can pop Radunz with their initial burst, but Radunz times his punches well and has the grip strength and balance to stay on his feet and maintain his block. He keeps a wide base when stationary, and when he has to circumnavigate the edge to mirror the opposing rusher, he’s very smooth and fluid with his movement.

There are times when Radunz is more reactive than proactive as a pass protector. I’d like to see him transfer some of the aggression he shows as a run blocker into his pass blocking. Of course, there is a fine line between aggression and carelessness, and Radunz safely sticks to his assignment.

He also has a strong anchor, and he can generate some artificial power by using that anchor and his lower body strength in tandem with one another. Of course, the leap to the NFL may unearth issues that weren’t previously apparent against FCS linemen.

Radunz was near dominant in his stint with the Bison. He’s a long, athletic lineman who has an aggressive mentality on the field and high character off of it. Already, he has enough going for him to be a 2021 NFL Draft pick. But there will be questions for Radunz to answer on the draft circuit, with the most pressing ones concerning his frame and level of competition.

Measuring around 300 pounds, the NDSU offensive tackle is noticeably underweight on the offensive line. A lot of his momentum and power comes from his lower body, but his upper body is less proportionally powerful. Against FCS defenders who often lacked the necessary athleticism and polish, this wasn’t much of a problem. But Radunz might have more trouble against NFL defenders who not only have more tools but can also stack moves and capitalize when Radunz is off-balance.

That serves as a nice transition into the concerns surrounding Radunz’s level of competition. Radunz did not play NFL talent week in and week out at the FCS level, and he’ll need to prove that it’s a jump he can handle. He did this at the 2021 Reese’s Senior Bowl, but the NFL presents yet another jump for the NDSU tackle to make.

Nevertheless, the Senior Bowl was big for Radunz. In Mobile, he faced off against a talented National Team EDGE group that included Patrick Jones, Shaka Toney, Rashad Weaver, and Elerson Smith, among others. Holding his own there was a good first step.

NDSU offensive tackle Dillon Radunz still has more left to prove, but it’s hard not to get excited when watching his tape. He’s a physical, proactive run blocker, and he has the athleticism to be a solid pass blocker for years on end. The questions surrounding his upper body density and strength will persist. However, Radunz at least has the foundational traits to build off of. He also has the mentality coaches want from their offensive linemen.

Radunz’s athletic profile gives him some versatility, provided that he can add more muscle to his frame without sapping any mobility. His ability to float along as a pass blocker and traverse the field through contact with his leg drive stands out on tape. Thus, teams with zone blocking propensities might especially favor Radunz’s skill set. That said, he has enough natural leverage and potential energy to provide utility in other offenses as well.

Radunz’s athletic traits were validated at his pro day. The NDSU offensive tackle earned a Relative Athletic Score of 9.28. Although he was marked down for his size, his 1.76 10-yard split, 32-inch vertical jump, and 114-inch broad jump boosted his results. So too did his agility numbers. Radunz was strong there, and despite measuring in at only 301 pounds, he still put up 24 reps on the bench.

Teams that best cater to Radunz’s needs and skillset

With all this being said, Radunz might not be a Day 1 starter, given the implications of his impending leap. Thus, going to a team where he doesn’t necessarily have to start Day 1 would be most beneficial. Teams like the Colts, Dolphins, Buccaneers, and Bears fit that description well. Moreover, the Vikings, Seahawks, and Jaguars could also be good matches for him.

Read one 2021 NFL Mock Draft, and you might see Dillon Radunz in Round 1. Read another, and you might see the NDSU offensive tackle in Round 3. Radunz’s talent affords him a wide range. I don’t think he goes Round 1. Round 2 is a potential scenario, especially after his pro day showing. His size is a legitimate concern in the context of the NFL. Nevertheless, Radunz shouldn’t fall past Day 2. He’s a stellar athletic talent with length, smarts, and tantalizing mauler tendencies.