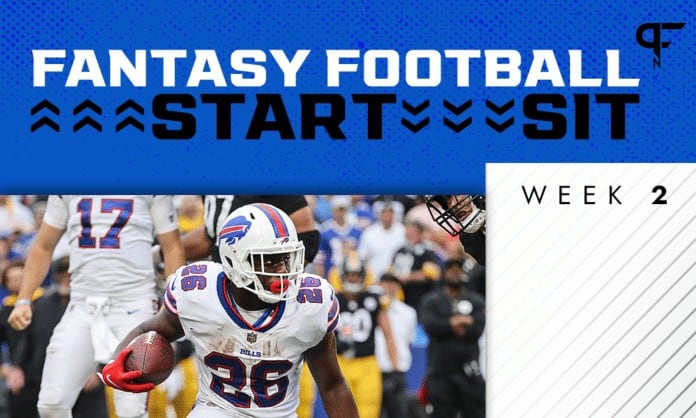 Devin Singletary Start/Sit Week 2: Will he get the bulk of carries again this week?

Buffalo Bills RB Devin Singletary wasn't great last week but was still flex-worthy for fantasy -- can you rely on him for Week 2?

By Andrew Hall
September 19, 2021
What's in this article? Click to show
Devin Singletary was the better back heading into the season
Singletary’s Week 1 stats
Should you trust Devin Singletary in Week 2?

Buffalo Bills running back Devin Singletary is a fantasy football enigma. He was confusing for managers last year, and this year looks no different. Singletary was one of those players that fantasy managers dreaded putting in their lineups, and he may have even landed on waivers by the end of the year in redraft leagues. With that in mind, should you start Singletary in Week 2 or sit him for someone else?

Devin Singletary was the better back heading into the season

I previously wrote about which of the two Bills RBs you should draft heading into the 2021 season. In that article, I laid out the argument that Singletary was the better option over Zack Moss. Throughout the 2020 regular season, Singletary was the more productive back, although not by much. All signs pointed to that being the case again this year.

Singletary finished 2020 as fantasy’s RB31 overall in PPR scoring and as RB43 in points per game. He wasn’t exactly someone fantasy managers could rely on, but he was the best option on his own team. That being said, the Bills didn’t lean on him all that much. Instead, they preferred to spread the ball around.

Singletary carried the ball a team-leading 156 times. That was 38% of the total rush attempts for the Bills. Moss was second with 112 carries of his own, or 27% of Buffalo’s total. QB Josh Allen was third with 25% of the team’s rushes (102 carries). Looking at the numbers, it’s clear the Bills didn’t use a bell-cow back last year.

If they do decide to lean on a single player, the confusion goes away, and that player becomes fantasy-relevant. A bell-cow back in Buffalo would certainly be usable in fantasy, even if Allen gets 10 carries a game. And like it or not, Singletary was that back in Week 1.

The Bills faced the Pittsburgh Steelers in Week 1. About 90 minutes before the game, Moss was listed as a surprise inactive, making Singletary an RB2 fantasy option. Fantasy managers were scrambling to decide what to do and many opted to play Singletary.

In that game against the Steelers, Singletary rushed 11 times for 72 yards, a 6.5-yard average. He also caught 3 of 5 targets for 8 yards. Singletary didn’t find the end zone, but he was the team’s leading rusher and someone fantasy managers got production from.

After Singletary, Allen was the team’s second-leading rusher with 9 attempts for 44 yards on the ground. Allen has perpetually been a rushing threat and will take carries from the running backs. Week 1 was no different. But Singletary didn’t do that badly with the carries he received.

In Week 1, Singletary finished as RB29 in PPR scoring. That might not sound great, but he finished ahead of stud running backs like Derrick Henry, Aaron Jones, Najee Harris, Ezekiel Elliott, and Saquon Barkley. Singletary was at least worth starting in a flex spot in a wild week.

Should you trust Devin Singletary in Week 2?

Before we decide whether to start Singletary in Week 2 or not, there’s one big question we need to answer: Will Moss play?

As I previously laid out, when both backs play, neither is all that exciting for fantasy. Allen and backup RB Matt Breida may both steal some carries from the already-small rushing pie as well. This would limit whatever upside is possible for Singletary, making him a clear bench candidate.

From what we know, Moss wasn’t injured last week. He was benched as a coach’s decision. This means that Moss could potentially suit up this week, barring another unexpected benching. If Moss were hurt or struggling on the field, then perhaps we’d have more to go on — but he’s a true unknown heading into Week 2. While far from ideal, we will likely have more info as Sunday approaches.

If Moss is a surprise inactive again, it’s wheels up for Singletary. The Bills face the Miami Dolphins in Week 2. In Week 1, the Dolphins let Patriots RB Damien Harris rack up 23 rushes for 100 yards. They also allowed RB James White to catch 6 of 7 targets for 49 yards. Both Patriots RBs outscored Singletary last week, making the Bills running back a worthy start this week if he’s the main guy.

Ultimately, if you’re starting Singletary this week you’re swinging for the fences. Moss limits Singletary’s potential significantly, so be sure to pay attention to pre-game reports on Sunday morning if you have Singletary in your lineup. Hopefully, you have another high-ceiling option to swap into your flex spot if Moss gets to play. You definitely don’t want to be left holding the bag for a bad week because you forgot to check your lineup.