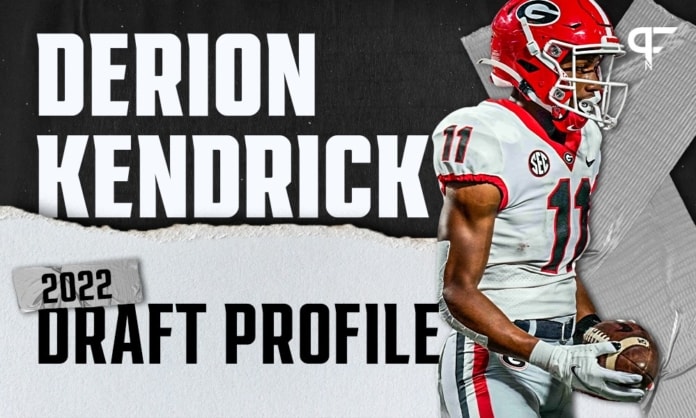 Derion Kendrick hasn’t traveled a conventional path to the NFL Draft. The Georgia cornerback has been through team changes, position changes, and overcome multiple challenges throughout his football career. Despite this, he still projects to be one of the best cornerbacks in the 2022 NFL Draft class, as his scouting report reveals.

Since Kendrick arrived on the college football scene, Clemson (where Kendrick began his college career) and Georgia have sent six cornerbacks to the NFL Draft. In that time, the two schools have boasted two first-round selections in A.J. Terrell and DeAndre Baker. Does Kendrick have the ability to join those two as Day 1 picks?

There’s no doubt Kendrick’s scouting report has some first-round elements to it.

As a former wide receiver, Kendrick exhibits exceptional ball skills. The Georgia cornerback can pluck the ball effortlessly out of the air with an impressive catch radius. His combination of excellent length and solid hands make him a nightmare for opposing pass catchers. Furthermore, his coverage ability is aided by his understanding of route concepts from playing the WR position.

Coverage ability is defined by more than just interceptions and pass breakups, however. Yet, Kendrick passes the eye test here, too. He has the athletic ability to be sticky in man coverage, rarely allowing separation in the games studied. In zone coverage, he uses his football intelligence and ability to click and close to neutralize the threat of anyone that enters his domain.

Kendrick’s best projection in the NFL would be as an outside cornerback in a zone-based scheme. When covering outside, he routinely forces his man up the sideline, shrinking the quarterback target area. However, he is versatile enough not to be limited to scheme-specific fits.

Another mandatory element of a cornerback scouting report is run support. Here, Kendrick is both willing and physical. He isn’t afraid to take on a ball carrier and is often seen sniffing around the box, looking for opportunities to make a play.

While Kendrick’s scouting report reveals first-round traits, there are areas of improvement and concern for the Georgia cornerback.

As was brutally revealed by Ohio State WR Chris Olave last season, Kendrick lacks elite speed. While he is explosive and has decent long speed, he can be exposed downfield by faster wide receivers.

Kendrick would also benefit from adding some muscle weight before heading to the NFL. At 190 pounds, he can hardly be described as skinny. However, there are times when bigger wide receivers and tight ends out-muscle him.

Finally, Kendrick needs to work on his tackling technique. While he’s not afraid to do the dirty work, he’s prone to ankle tackles rather than wrapping up his opponent. Improving his technique will allow him to flourish in run support.

Although Kendrick should be considered one of the top cornerbacks in the 2022 NFL Draft, his high school career saw him dominate on the offensive side of the ball. A wide receiver as a sophomore at South Pointe High School in South Carolina, he transitioned to being a dangerous dual-threat quarterback for his junior season.

A true weapon in the air and on the ground, Kendrick amassed 5,308 passing yards with a 59:6 touchdown-to-interception ratio combined with 1,682 rushing yards and 25 rushing touchdowns over his final two years at South Pointe.

Kendrick’s immense athletic potential was obvious. South Pointe played him all over the field, and he even saw snaps as a situational safety throughout his career. Having coached Stephon Gilmore, South Pointe head coach Strait Herron knows a thing or two about elite defensive backs and heaped praise on Kendrick’s defensive ability even while attempting to carve out offensive opportunities at the next level.

“Honestly, I think he would be one of the best safeties or corners that we ever had.”

Despite those defensive compliments, Kendrick was committed to becoming a pass catcher. The Gatorade South Carolina Player of the Year was a five-star wide receiver and the fourth-best at the position in the 2018 class. Despite attracting offers from Alabama, Georgia, and Notre Dame, Kendrick went from Rock Hill to Howards Rock with his early commitment to the Clemson Tigers.

With athleticism, explosiveness, and catching ability, Kendrick quickly drew comparisons to a former Clemson legend — Sammy Watkins. With limited playing time and a deep well of talent in the wide receiver room, Kendrick wouldn’t live up to Watkins’ 1,000-yard freshman season. However, Kendrick did average similar yards per catch and rushing yards per carry figures.

Kendrick was expected to emerge as the WR3 alongside Justyn Ross and Tee Higgins for the 2019 season. Yet, an injury crisis in the DB room led to a career-altering change of position. Kendrick excelled against the receiving talent he’d been meant to be lining up alongside during spring practice.

Within the space of months, Kendrick went from emergency cornerback to a second-team All-ACC select. He made 15 starts as Clemson embarked on the defense of their national championship. Kendrick returned his first-ever interception for a touchdown against FSU, adding another interception against South Carolina. Furthermore, he flashed potential against the run with 3 tackles for loss among his 51 total tackles.

The highs and lows of a college football career

Although he missed some game time in 2020, Kendrick developed into a genuine NFL Draft prospect through his junior season. He added another interception to his résumé against Miami (FL) while coming up big with his first career sack in the ACC Championship Game. Finishing the season with 20 tackles, 1 tackle for loss, 6 pass breakups, and the interception, Kendrick earned first-team All-ACC honors.

Considered a potential early-round prospect, Kendrick decided to return to school instead of the NFL. However, he wouldn’t return to Clemson. The playmaking cornerback was dismissed from the program and entered the transfer portal.

Mystery surrounded his dismissal until Kendrick broke his silence on the subject. He called it a “breakdown in communication” with the school while he prioritized looking after his hospitalized son over being present on campus. An arrest for drug and weapon violations also shrouded his football career in mystery. As a result, Kendrick remained in the transfer portal until June.

That’s when he found a new home. The Georgia Bulldogs had pursued Kendrick as a high school prospect. With the majority of their secondary departed to the NFL, the move made too much sense for both sides. The Bulldogs got a playmaker, and Kendrick got a new start and an opportunity to elevate his NFL Draft stock this fall.