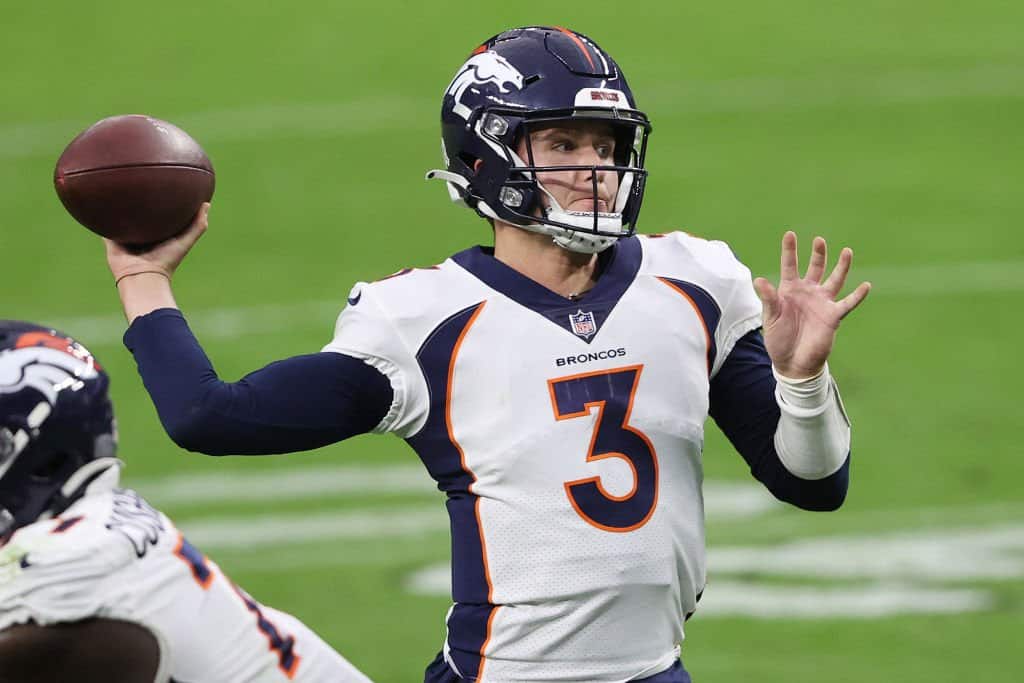 LAS VEGAS, NEVADA - NOVEMBER 15: Drew Lock #3 of the Denver Broncos throws against the Las Vegas Raiders during the first half at Allegiant Stadium on November 15, 2020 in Las Vegas, Nevada. (Photo by Sean M. Haffey/Getty Images)
What's in this article? Click to show
Who do the Broncos play in 2021?
Denver Broncos’ strength of schedule for 2021
Want more NFL news and analysis?

Who are the Denver Broncos’ 2021 NFL opponents as they look to bounce back from a poor performance in the 2020 season? Let’s look at who the Broncos will play in 2021, and what that means in terms of their strength of schedule ranking compared to their rivals.

The Broncos’ list of 2021 opponents will see them play the typical six games against the AFC West: Kansas City Chiefs, Las Vegas Raiders, and Los Angeles Chargers. As is customary, the Broncos will face each of those three teams both at home and on the road during the 2021 season.

The 2021 season will also see the AFC West compete against the AFC North and NFC East for another eight games. The traditional schedule’s final two games will see the Broncos face the two teams that finished in last place of the AFC East (New York Jets) and AFC South (Jacksonville Jaguars).

The 2021 season is expected to introduce a 17th regular season game for all NFL teams. Tom Pelissero and Ian Rapoport reported on NFL.com that plans are in place to expand the regular season, although their report has yet to be officially confirmed by the NFL. Therefore, who would be the opponent for the Broncos’ 17th game in the 2021 season?

Reports suggest that a decision has been made on how the 17th game opponent will be decided. The matchup will be an interconference tilt based on standings on a rotational basis.

Albert Breer reported that the divisional alignments for the 2021 season had already been set. According to Breer, the AFC West will match up with the NFC North for the 17th game. Therefore, the Broncos’ opponent for their 17th game in 2021 would be the Detroit Lions.

Here are the teams that the Denver Broncos will play against in the 2021 NFL season:

Denver Broncos’ strength of schedule for 2021

The Broncos have one of the easiest schedules in 2021

The Broncos’ 2021 strength of schedule ranks 28th in the league. They have the easiest schedule in the AFC West and AFC overall. Only four teams in the entire NFL have an easier schedule than the Broncos.

With the NFC East on their 2021 schedule, the Broncos face four opponents who won an average of just 5.8 games in 2020. Additionally, the three games against the Jets, Bengals, and Jaguars see them face three teams who averaged only 2.3 wins last season.

The Broncos’ 2021 opponents coming to Empower Field at Mile High ranks as the ninth-easiest home schedule. Only two of the Broncos’ eight opponents at home in 2021 won double-digit games last season.

Meanwhile, their road schedule ranks as the 15th toughest, with three games against teams who won double-digit games in 2020.