Which players did the Denver Broncos come away with in the latest 2021 NFL Mock Draft from Pro Football Network Draft Analyst Dalton Miller?

With training camp starting for the Denver Broncos, it’s never too early to take a look at the 2021 NFL Draft class, and that’s exactly what Pro Football Network analyst Dalton Miller did in his recent two-round NFL mock draft. With another talented class of college football athletes coming in 2021, the Broncos are poised to upgrade several positions where there are still some doubts being cast. In the 2020 NFL Draft, the Broncos focused on improving their offense with dangerous weapons like wide receivers Jerry Jeudy and K.J. Hamler, while also adding quality defensive role players in cornerback Michael Ojemudia and defensive lineman McTelvin Agim. Let’s take a deeper dive into Miller’s selections in this Broncos 2021 NFL mock draft and see how they fit into the Broncos scheme.

In Miller’s mock draft, the Broncos address pressing needs on both sides of the ball. With plenty of star power in the 2021 draft class, the Broncos could make yet another draft splash as they work their way back to the top of the NFL mountain. If you’d like to run your own Broncos mock draft, use the PFN Mock Draft Simulator below.

Dalton appealed to the hearts of Broncos Country with this pick, having the Broncos select North Dakota State offensive tackle Dillon Radunz. With the consistent struggles in pass protection throughout his short career in Denver, left tackle Garret Bolles has lost some of his appeal with Broncos fans. While Bolles showed significant improvement during the last five games of the 2019 season, it wasn’t enough of an improvement for the organization to pick up his fifth-year option, making him an unrestricted free agent after the upcoming 2020 NFL season.

Bolles will be fighting to prove that he deserves a new contract in Denver, and with offensive line coach Mike Munchak teaching him and developing him, it could still remain a possibility that he is in the team’s plans for 2021. However, in a star-studded offensive tackle class that features premier left tackle talents like Oregon’s Penei Sewell, Alabama’s Alex Leatherwood, Texas’ Samuel Cosmi, and of course Radunz, it wouldn’t be difficult for the Broncos to hit the reset button and move on from Bolles.

What could Radunz bring to the Denver Broncos?

As Dalton says in his mock draft, “Radunz dominates his competition with a mix of killer tenacity while remaining technically proficient as a run blocker.” This was one of the biggest things that stood out on film when watching North Dakota State. Radunz gets after his opponents and does an excellent job blocking into the second level. In Denver, Bolles has shown at times that he can have a nasty streak as a blocker, but it’s just that: a streak. With Radunz, the Broncos run blocking from the left side would be much more consistent.

The biggest knock on Radunz as of now is that he doesn’t look entirely comfortable in his pass blocking sets and that he also doesn’t necessarily face NFL-level competition in the FCS on a consistent basis. We would have been able to get a good look at those abilities when North Dakota State was scheduled to face Oregon, but unfortunately, we won’t get to see him go up against Kayvon Thibodeaux in 2020 due to the conditions of the ongoing pandemic.

Radunz could ultimately be molded by Munchak to be the Broncos franchise left tackle. He’s got the size, the technique, and the strength to be the long-lasting protector of Drew Lock’s blindside for years to come. This is an A+ pick by Dalton here.

In this mock draft, Miller has the Broncos selecting a potential replacement for strong safety Kareem Jackson with Pittsburgh’s star S Paris Ford. With Jackson coming off of the best season of his career, he will be turning 33 in 2021 and entering the final year of his contract with Denver. Bringing in Ford in 2021 could make the Broncos secondary one of the more dangerous units in the NFL, especially after adding veteran cornerback A.J. Bouye, and Ford would likely have an immediate impact on the defense.

Beyond 2021, Ford could turn into one of the better safeties in the league with the guidance of defensive coordinator Ed Donatell and head coach Vic Fangio and by playing alongside Justin Simmons. The Broncos already have a strong tandem with both Simmons and Jackson and have an opportunity to continue that success with this selection.

What can Ford bring to the Broncos secondary?

Ford, in a lot of ways, is similar to Jackson. Both play with an extremely high level of physicality and aren’t necessarily the biggest players on the field. Ford works incredibly well in shallow zones and loves to set the tone with big, physical hits. With Ford coming in to replace Jackson, the Broncos would likely be receiving a younger carbon-copy of Jackson.

Ford is an incredible athlete that loves coming downhill to engage in contact while remaining technically sound and consistent as a tackler, something that Fangio expects out of his defensive backs. With Ford’s athleticism, aggressiveness, physical playstyle, and his ability to work well in zone coverage, he would be a strong fit for the Broncos defense and a steal for the Broncos at 47th overall in Miller’s 2021 NFL mock draft. 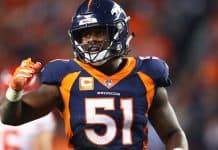 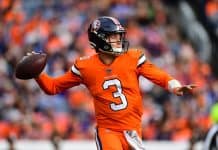 Defining positions in the front seven of NFL defenses isn’t as easy as it used to be. In this list of the top 25...
View Post
Denver Broncos

The Denver Broncos will enter 2020 with a strong idea about who will lead them at quarterback. The Broncos have three quarterbacks on the...
View Post
NFL Analytics and Stats

Tight end Noah Fant made a noticeable splash during his rookie year with the Denver Broncos. It took some time, but the rookie TE...
View Post
NFL Draft

We've entered the final stages of offseason boredom. We are but a single month away from finally reaching football season. Yes, the road to...
View Post