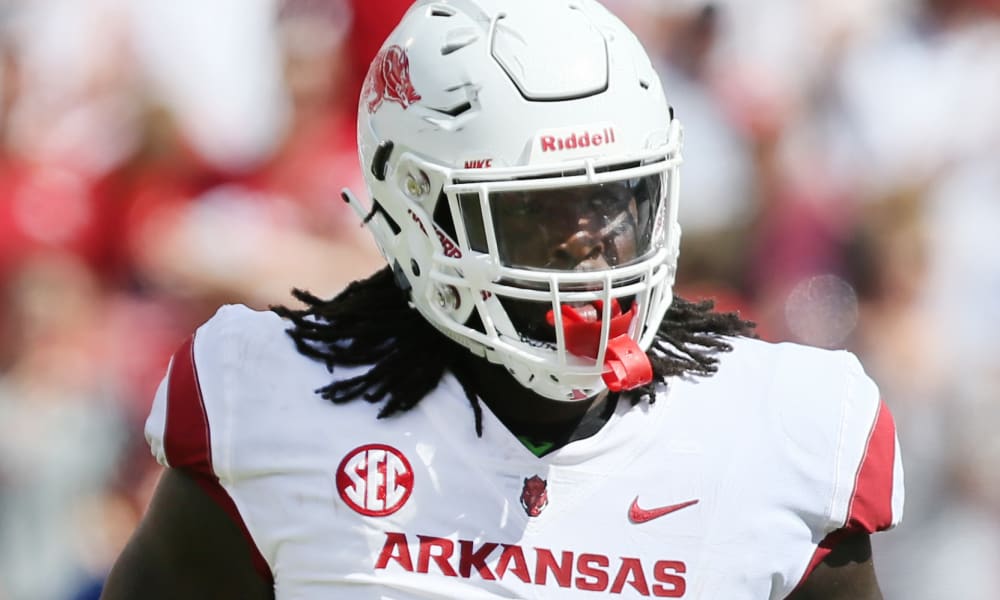 As the Denver Broncos get ready to begin training camp, defensive tackle McTelvin Agim will prepare to secure a spot in the rotation this season, defensively. That makes it the perfect time to review what the Broncos should expect from the team’s rookie in 2020, continuing our series of analyzing the team’s draft picks under the microscope.

After analyzing cornerback Michael Ojemudia and center Lloyd Cushenberry, what can the Broncos expect from their final third-round pick from the 2020 NFL draft?

How will DT McTelvin Agim impact the Broncos in his rookie season?

Agim has the ability to quickly become an impactful player on the defensive line for the Broncos, although he’ll need some development from defensive line coach Bill Kollar before he can reach his full potential.

2019 was Agim’s first season at defensive tackle, after spending his first three seasons as a defensive end, which means he’s still a work in progress developmentally. Right now, his strength and ability to anchor on the interior and push the pocket will need to improve before he can become a regular contributor at DT.

Although he displays good gap penetration, Agim plays DT more like an edge rusher, which makes sense considering his previous experience at DE, but if he’s unable to get around his blocker, he’ll have a hard time running through them with his power alone. His spin move stands out when reviewing film and he’s got strong hands, but if those two counters fail, he doesn’t have many other moves in his arsenal.

At this point in his development, Agim relies primarily on his first step and burst off the line of scrimmage to knife through a gap of the offensive line to blow up a play before it even has a chance to develop. That ability should make him a rotational interior pass rusher for the Broncos from day one if he can piece together consistent practices. He also has the lateral quickness to thrive on tackle-end stunts and roam between the tackles to suffocate the run. He also has a tendency for ripping the ball out of ball-carriers hands, where he forced six fumbles over his final three seasons at Arkansas.

Agim’s athleticism means that he should primarily be on the field during passing downs as a three-technique in head coach Vic Fangio’s defense, but as is the case with most defensive linemen under Fangio, fans should expect to see him utilized in several different alignments this season. While he needs to refine areas within his technique with his hands and add more power to his game, you can’t teach the quickness and agility he has, which gives him a high ceiling.

What does DT McTelvin Agim’s path towards playing time look like in his rookie season?

Agim biggest obstacle towards getting onto the field in 2020 will be the depth the Broncos already have on the defensive line. Mike Purcell and Shelby Harris were impactful on the defensive interior last season, and they’ll reprise their defensive roles in 2020, while Jurrell Casey replaces Derek Wolfe.

That means, barring injury, Agim won’t find himself starting in year one, but he should be able to carve out a role as a rotational piece how fellow Broncos 2019 third-round pick Dre’Mont Jones did last season. However, in order to earn that role in Fangio’s defense as a rookie, Agim will have to battle veteran DL DeMarcus Walker, who’s coming off of the best season of his career in 2019, and veteran Christian Covington.

Covington won’t likely steal too many pass-rushing opportunities from Agim, as that isn’t his specialty, but as a rotational piece on the Broncos defensive line, he will compete with Agim for valuable playing time. Walker, on the other hand, will be Agim’s primary source of competition as a rotational interior pass rusher, as that was his role in the Broncos defense last season, alongside Jones.

With the traits and youth that Agim has, Walker could enter the season as the better player and limit how much the rookie sees the field, but it could allow the Broncos to focus on Agim’s potential development even further. As training camp begins, Walker faces being on the roster bubble, which could lead to Agim seeing the field as a rookie if the Broncos decide to move on from their 2017 second-round pick.