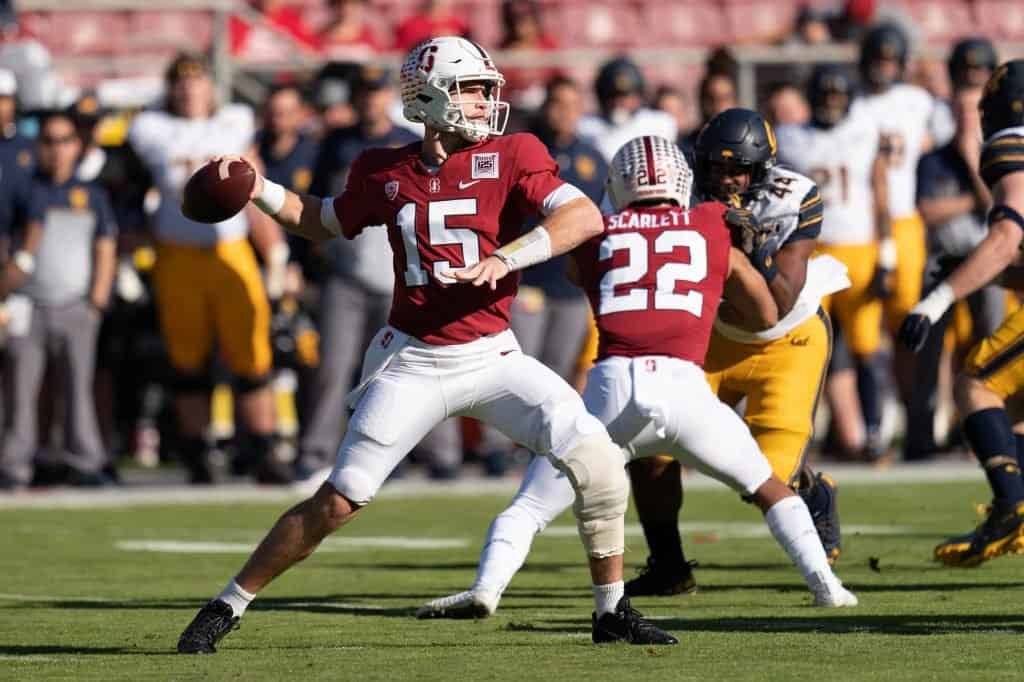 As teams make their final preparations before heading off to Cleveland for the NFL Draft, we are starting to see players’ perceived draft capital raising to new heights. Is this warranted, and if so, what is Stanford QB Davis Mills‘ draft projection?

Unless they’re coming out of a team’s war room, anyone who says they know for certain what Mills’ draft projection is doing guesswork. Every year around this time, we see guys on the periphery of the mainstream media get placed upon a pedestal, and out of nowhere, are proclaimed to have first-round talent. It looks like the flavor of the week is Mills, as now teams in the back end of the first suddenly have him “on their radar.”

Perhaps I am coming off a bit harsh as I really do like Mills. We know the top five QBs who are locked in this year. Once you get to QB6, however, it’s up in the air. Perhaps Mills should have held his pro day after Zach Wilson and taken a page out of his script, even though it is not his game whatsoever.

Mills is about as prototypical of a pocket passer as they come. At 6’4″, 225 pounds, Mills has an NFL caliber arm and tested surprisingly well for someone who never used his legs at Stanford. Despite being the former No. 1 ranked pro-style QB coming into college, Mills has a limited body of work. Over four years, Mills started just 11 games for the Cardinal. In total, he went 287 of 438 (65.5%) for 3,486 yards, 18 touchdowns, and 8 interceptions.

PFN’s Chief Draft Analyst Tony Pauline has Mills ranked 64th overall on his draft board with a draft projection that lands him around the late-second to early-third-round range. This is far more reasonable than anything close to the first round as some want to speculate.

One team that could be interested in acquiring Davis Mills’ skillset would be the New England Patriots. They are currently expected to start the season with Cam Newton at QB, but the team hasn’t been very subtle about their desire to sign another signal caller.

In a recent report, Pauline said that several people told him that the chatter is the Patriots possibly select Mills in the first round, though it will be a late-first-round selection via a trade down from No. 15 or trade up from the second round. Mills checks all the boxes the Patriots are looking for at the position and he comes with terrific upside.

I almost always avoid making player comparisons. But when I watch Mills, I see some Kirk Cousins in his game. He is a natural talent as a passer and can generate the requisite velocity at all three levels of the passing scheme. When he does scramble, there is enough juice to pick up the first down and/or take advantage of an open side of the field for a sneaky goal-line rushing TD. No one is going to mistake him for Kyler Murray, but he’s not Ben Roethlisberger either.

As with most QBs, Mills needs time to develop. Cousins will be 33 at the start of the season, and his contract is set to expire after 2022. The cost of which is gigantic. Cousins carries a $31 million cap hit in 2021 and a massive $45 million cap hit in 2022. With only $10 million in dead cap next year, the Vikings could try to get out from underneath Cousins’ contract. Mills would spend this year under Cousins learning the game and then have a shot to win the starting role next season.

Now in the post-Drew Brees era, the New Orleans Saints no longer can rely on him to carry the offense. Jameis Winston signed a one-year deal in the offseason but beyond this year is anyone’s guess. There has already been some media speculation saying that the Saints should take Mills in Round 1, assuming he’s available. I can’t entirely agree with this notion, but the landing spot I understand.

If anyone can help Mills in his development, it is Sean Payton. After all, Winston said he went to New Orleans to get a QB master class. Once past the first round, the Saints have picks 60 and 98. If the Saints want to land Mills, they will need to at least do so with their second pick. But it only takes one team to fall in love with Mills to see him fly off the board before they get the chance.

While we all love Ryan Fitzpatrick, Washington knows he is not the long-term answer. They are a team we expect to be heavily involved in the QB market come draft day. However, they’ll likely need to make a trade up to land one of the big five. Should they choose to hang on to their picks, Mills could be in play for them with one of their two third-round picks at No. 74 and 82.

As we have said, Mills’ downside is the lack of mobility which is becoming more and more of a need in the modern game. It helps to extend plays and also can help mask deficiencies at the offensive line. If this draft projection does end up being correct for Mills, you won’t find a QB who has more experience to learn from than Fitzmagic.

While a great coach, Mike Tomlin’s biggest failure has been to find the heir of the franchise. The Steelers were bailed out this year after Roethlisberger surprised many by coming back for his 18th season.

The Steelers have more needs than they do draft selections. With this in mind, they need to be smart in what order they attack them. They need to look at the offensive line and running back first before addressing QB. Roethlisberger’s return signified they are making one last run for the Lombardi Trophy, which means they need to address the other needs first to make this into a reality.

In a year from now, the Steelers could very well be the fourth-best team in the division — it’s all or nothing in 2021. If they select Mills in Round 3, he would be entering a competition with Mason Rudolph and Dwayne Haskins for the backup and have the leg up as the eventual successor to the throne.

There is thick debate surrounding what the Atlanta Falcons will do with the No. 4 overall pick. The majority of mocks have them selecting a quarterback, but is it the smart move?

Matt Ryan is still playing well, and they are more than one piece away from competing. The smart move would be to trade back and acquire more assets which could help reshape the roster. But that does not mean the Falcons should not consider the future as well.

Mills has many of the same attributes as Ryan and would seamlessly fit into the Arthur Smith pro-style offense. With just 13 career games under his belt, Mills can gain confidence at the next level. Additionally, the Falcons would have some time to evaluate his game. So long as his knee issues can be a thing of the past, this could be a marriage that lasts for years to come.