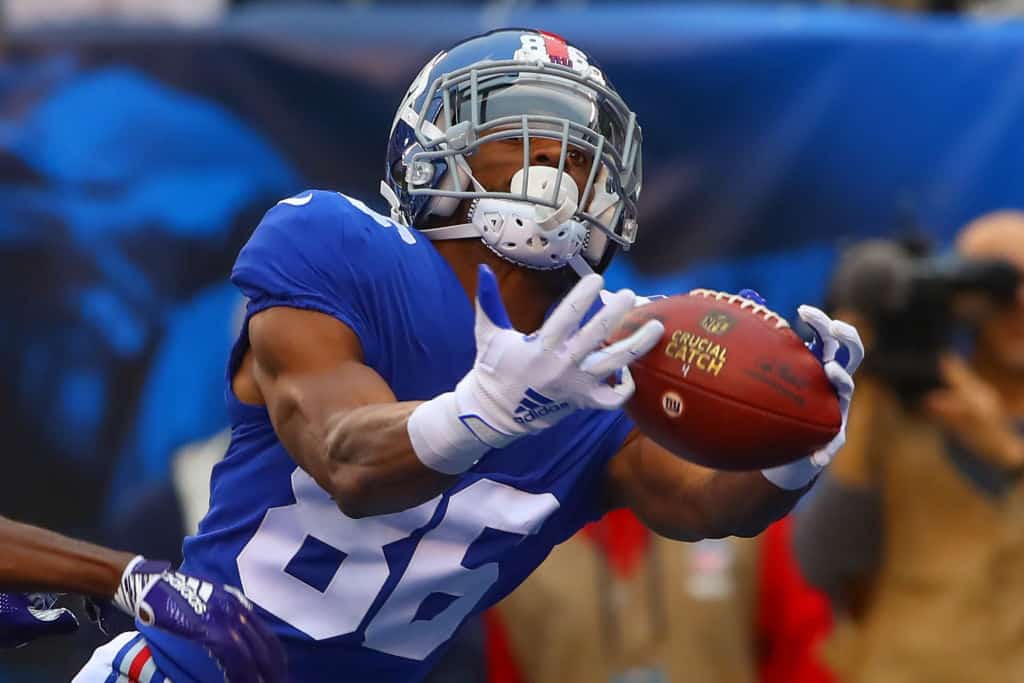 EAST RUTHERFORD, NJ - OCTOBER 06: New York Giants wide receiver Darius Slayton (86) makes a touchdown catch during the second quarter of the National Football League game between the New York Giants and the Minnesota Vikings on October 6, 2019 at MetLife Stadium in East Rutherford, NJ. (Photo by Rich Graessle/Icon Sportswire via Getty Images)
What's in this article? Click to show
Slayton enters Thursday Night Football nursing a foot injury
Darius Slayton could get some competition for targets if Sterling Shepard returns from IR
Darius Slayton is a mid-range WR3 in fantasy this week due to his touchdown upside
Want more fantasy football analysis and news?

After a dynamic rookie campaign where all he seemed to do was score touchdowns, Darius Slayton has been the top option for the New York Giants passing offense all season. Entering their Thursday night game against the Philadelphia Eagles, Slayton has a short week to get ready and come back from an apparent foot injury he suffered against the Washington Football Team. If active, can you trust Darius Slayton in fantasy football this week, or should you steer clear of the situation?

Apparently, the MetLife Stadium curse is not only for visiting teams as it struck again with Darius Slayton this past weekend. After catching a 23-yard pass in the first quarter for a touchdown, you could see Slayton injure his foot when he tried to slow down before hitting the wall in the back of the end zone. Almost immediately, he started limping. However, he was able to return to the game. But, on his second reception, Slayton was tackled and came up limping once again.

Knowing the team has a quick turnaround this week as they prepare for a Thursday Night Football game against the Eagles, Slayton’s availability for the game seemed to be in question. Luckily, Giants’ fans and fantasy managers can breathe a sigh of relief – Slayton was not listed on the team’s final injury report on Wednesday, Dan Salomone of the Giants’ official site reports.

This was the second week in a row where Slayton’s practice reps were capped due to a foot injury, but if Week 6 was any indication, it won’t slow him down. Facing Washington this past Sunday, he played 83% of the snaps on offense and caught two of his four targets for 41 yards and one TD.

Considering that Washington gives up the fewest points to opposing wide receivers (27.37), Slayton should be in for a better week as the Eagles give up the 10th-most fantasy points per game (39.47).

Slayton has been the teams unquestioned WR1 this season, mainly due to teammate Sterling Shepard being stashed on the IR since Week 3 with a turf toe injury. The only fully healthy receivers on the active roster are Golden Tate and UDFA rookie Austin Mack, who played his first NFL game on Sunday.

As of Tuesday, Shepard was not listed on the team’s injury report because he had not been activated yet, although it seems imminent, and could even be on the field on Thursday. However, without practice, it is hard to see him getting any playing time.

Once Shepard comes back, even if not until Week 8, he will instantly cut into Slayton’s targets. Slayton’s 25 receptions on 44 targets for 406 yards and three touchdowns have him on pace to blow away his 2019 totals. While his catch percentage is down (57.1% to 56.8% in 2020), Slayton’s yards per catch (16.2) and yards per target (9.2) are both ahead of his 2019 totals. It is worth pointing out, though, that he has had relatively little competition for targets compared to last year.

Shepard alone commanded a higher target share (17.5%) in the ten games he appeared in during the 2019 season, catching 57 of his 83 targets for 576 yards and three touchdowns. Slayton was the flashier player, scoring touchdowns at an absurd rate while Shepard was the team’s leader in receptions per game at 5.7.

It will take some time for Shepard to get up to game speed once he is activated from the IR, but once he does, we could likely see a 1A and a 1B situation in New York.

Currently 10th in plays per game and 17th in passes attempted, it will be hard for both players to be weekly starting options given the limited amount of targets available. As such, both of their ceilings will be limited.

What will determine how well Slayton performs is based on which cornerback the Eagles choose to place on him as there is a drastic difference in talent level throughout their secondary.

The first and worst scenario is that the Eagles shadow him with CB Darius Slay. Slay enters Week 7 having already shadowed Terry McLaurin and A.J. Green this season. He held McLaurin to three catches and 31 yards on 27 routes and Green to four catches for 36 receiving yards on 36 routes. On the season, Slay has allowed only 305 yards on 28 catches and no touchdowns on 202 defended routes on the season, which works out to 0.29 fantasy points per coverage snap.

On the other end of the spectrum, Slayton could matchup against CB Nickell Robey-Coleman, who has allowed the third-highest rate of completions in the league at 89%. If that is the case, Darius Slayton’s fantasy outlook is much higher.