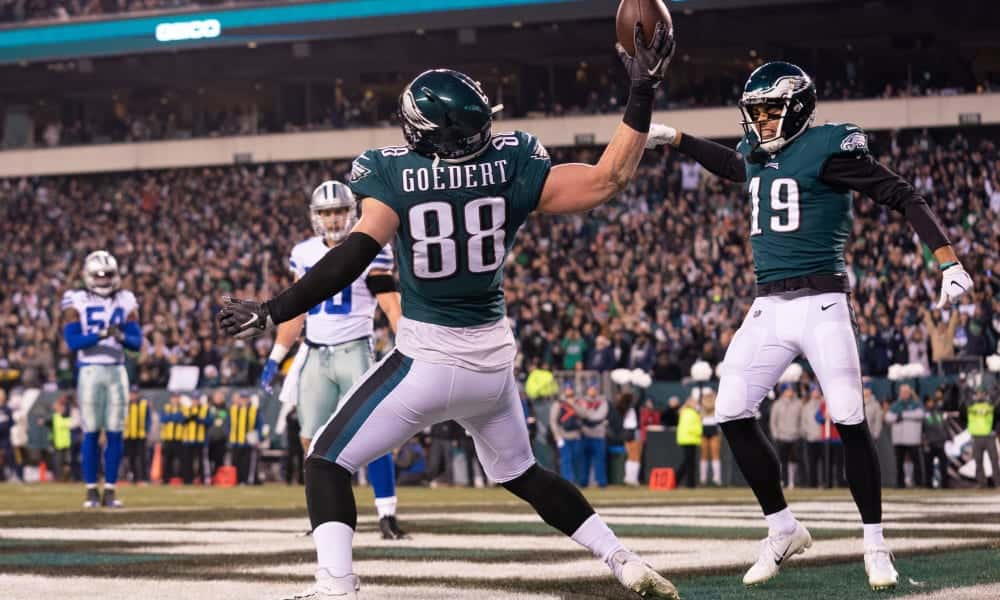 Dallas Goedert has got history with the NFL Playoffs. The second-year tight end will be hoping that history repeats itself as the Seattle Seahawks travel to Lincoln Financial Field to take on his Philadelphia Eagles in the final game of the NFL Wild Card Weekend.

In last season’s Wild Card round of the NFL Playoffs, Goedert played a pivotal role in the Eagles shock victory over the Chicago Bears. The then-rookie gave the Eagles a 10-6 lead with the opening touchdown of the game. He was also instrumental in the drive that gave the Eagles their go-ahead touchdown, in a game more famous for Cody Parkey’s missed field goal as time expired.

With a litany of injuries during the regular season, Goedert is primed to be a game-changer for the Eagles against the Seahawks today.

Their wide receiver group has been decimated, with Alshon Jeffery and DeSean Jackson on injured reserve, and Nelson Agholor ruled out for today’s game. Former undrafted quarterback, Greg Ward Jr, is the Eagles current WR1.

Although running back, Miles Sanders has been cleared to play (at the time of writing), there are still doubts over multiple key players. Right tackle, Lane Johnson, and Goedert’s fellow tight end, Zach Ertz, were both described as questionable by head coach Doug Pederson following Friday’s practice.

If Ertz can’t make the field, and even if he can, the Eagles can still rely on Goedert.

Ertz’s reputation as one of the best tight ends in the NFL is well warranted. However, our Offensive Share Metric (OSM) shows that Goedert has been equal to, if not better than, Ertz through the 2019 regular season.

However, as OSM only factors in variables that are within a player’s control, that gives a clearer indication of an individual’s contribution to the performance of the team.

Through the 2019 regular season, Goedert is our 16th ranked tight end with an overall grade of 35.54, which denotes a “very good” performance. Ertz is ranked 27th, with a grade of 32.63. Still a very good performance for the Eagles, but not as good as Goedert’s.

Goedert has also done a better job creating separation defenses. Despite being allowed less cushion at the line of scrimmage, Goedert has produced an average of 3 yards of separation per play, while Ertz has created 2.7 yards. These may seem like small margins but in a sport as close as the NFL, where games can be won or lost in the blink of an eye, every inch, or 0.3 of a yard matter.

Goedert has also been better making plays after the catch for the Eagles this season. Based upon several factors, Next Gen Stats calculate an expectation of yards after the catch, and while Goedert has met this, Ertz has a negative variance of 0.6 yards per catch.

Despite all of this, Goedert has been targeted far less than Ertz.

If the Eagles want to shock the Seahawks and progress to the NFC Divisional Round, then they will need to lean on Dallas Goedert.

Can Eagles overturn Week 12 loss and shock the Seahawks?

It’s the second time the two teams have met this NFL season.

In Week 12 of the regular season, the Seahawks won 17-9 in Philadelphia, in a game that saw Carson Wentz throw two interceptions. The Eagles limited MVP candidate Russell Wilson to just 200 passing yards but were gashed on the ground by Rashaad Penny to the tune of 129 yards.

Goedert received his highest OSM grade of the season in the Eagles tight loss, an elite 46.36. As is the trend from the rest of the regular season, he created more separation and had a better completion percentage than Ertz, but only accounted for 5.97% of the Eagles total intended air yards.

Although they found success with Boston Scott in the Week 17 win over the New York Giants, the Eagles’ best chance of beating the Seahawks will be to target Goedert as much as possible. Seattle has the sixth-worst passing defense in terms of yards allowed and has given up a huge 1099 yards to the tight end position.

The Eagles give up an average OSM grade of 37.77 to the tight end position, including elite grades to C.J. Uzomah, Vance McDonald, Austin Hooper, Goedert, and a 50.41 grade George Kittle, in a Week 17 loss to the San Francisco 49ers.

The Seattle Seahawks have won just twice since the Week 12 clash in Philadelphia, whereas the Eagles have won their last four.

Despite this, the Seahawks start as a slight favorite.

Dallas Goedert can help overturn the Week 12 loss and provide a shock in the NFL Playoffs for the second straight year.