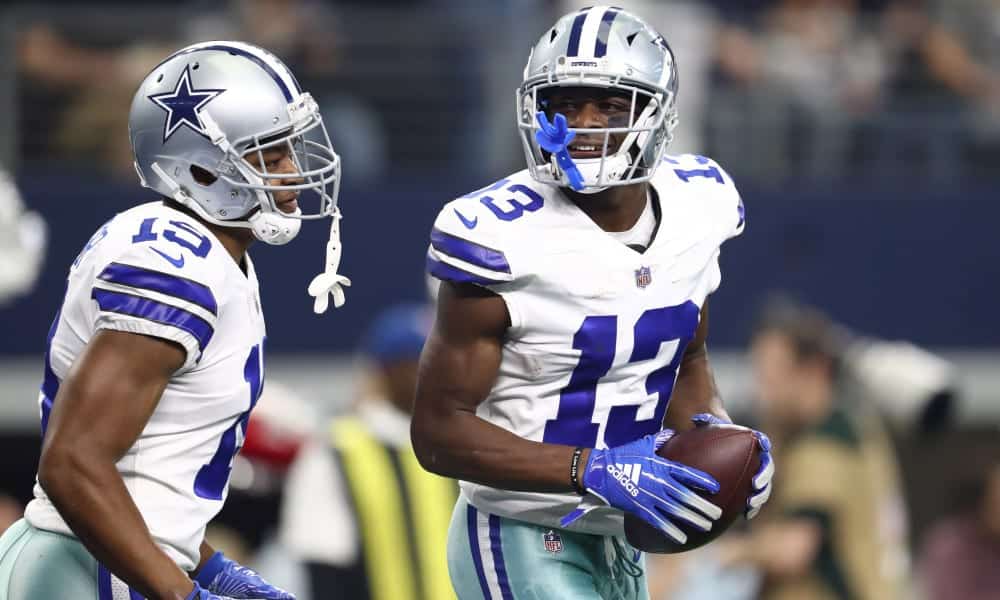 The ongoing battle for power between Dak Prescott and the Dallas Cowboys is far from over. Four years into his flourishing NFL career, the two parties cannot come to terms with the appropriate deal for the soon to be a 27-year-old gunslinger. Luckily for Jerry Jones, even without his man under center, the Cowboys’ offense should excel as one of the top units to watch in 2020.

As the NFL continues to evolve into a pass-happy league, most fans understand that third receivers and slot cornerbacks are considered full-time starters. That alone justified Jones’ selection of Oklahoma’s CeeDee Lamb with other pressing needs on the table. Quickly viewed as perhaps the steal of the first round, Lamb’s top 10 potential could make an immediate impact when lined up with two other 1,000 yard receivers.

With a potential holdout looming, Jones also decided to bring in Andy Dalton. The former Bengals’ quarterback returned closer to his college, looking to retool in a city near his heart. Thus, should the holdout fall into the season for all parties involved, Dallas will have a competent starter to keep the offense pushing ahead.

But back to the receiving corp. With a group featuring Amari Cooper, Michael Gallup, and the emerging standout Lamb, Dallas could roll out with any Dave and Derrick off the street with a decent arm to make the throws at AT&T Stadium. Throw in the valued offensive line and consistent running back Ezekiel Elliott, what’s there to hate?

The Cowboys, who might be the most well-known franchise across the world, will still have some defensive issues that could cost them a Lombardi Trophy. However, even if Prescott isn’t back in the building by September, that shouldn’t hold the offense back from becoming a dynamic force in the NFC.

Watch out for the Cowboys 2020 offense

Mike McCarthy was set to bring the Cowboys back to ’90s glory following the firing of Jason Garrett. The former Green Bay coach loved using his three-receiver set of Jordy Nelson, Randall Cobb, and Davante Adams. In fact, according to Robert Mays, in McCarthy’s final season, the Packers led the league in most offensive play calls featuring a trio of wideouts.

Cobb rejuvenated his career with Dallas last season on a one-year contract. After becoming the third option, the former Packers star tallied 828 receiving yards off 55 catches and three touchdowns, predominately playing from the slot position. With Cobb now playing for the in-state rival Houston Texans, the Cowboys needed to add another playmaker to thrive in McCarthy’s triple-target formation.

So in comes Lamb, a multi-tooled receiver who enchanted his potential by succeeding in the slot and on the perimeter during 2019 in college. Although the 6-foot-2 target might not fit the mold of an ideal smaller or shiftier target, his short-speed game will allow him to win against pressing corners to blend with his physicality.

Lamb’s presence could play into Dallas’ favor following minor draft concern. Perhaps the most reliable hands of all April’s draftees, this allows the young receiver to win off the line and pick up yards as a possession receiver rather than a home-run threat. As a bonus, his brute strength forced 26 missed tackles, perhaps making him a mismatch against smaller-framed slot corners.

This should allow Kellen Moore and his offensive personnel to run multiple formations with the trio contributing in different roles. Lamb isn’t limited inside, thus enabling Moore opportunities to shift Cooper back to the slot, reminiscent of his time in Oakland, where he made his bread and butter. With his growing presence as one of the league’s top pass-catchers, the former Crimson Tide star should only solidify his WR1 mentality no matter where he lines up.

In Dalton’s final year with the Bengals, the team brought in former Rams’ quarterback coach Zac Taylor to begin a new era. A disciple of Sean McVay, working with three-receiver sets was instrumental to Los Angeles’ success on their way to a Super Bowl LIII appearance.

On paper, Taylor was expected to use A.J. Green and John Ross on the outside, while rising star Tyler Boyd would command the slot. Green missed the entire season with injures, while Ross also only suited up for eight contests. Instead, Dalton was forced to rely heavily on Boyd, with Auden Tate and Alex Erickson commanding the perimeter.

Dalton’s downfall was due to the lack of protection and targets. Both Tate and Erickson finished with under 600 yards and combined for a single score. Meanwhile, the offensive line jumbled through the season without rookie Jonah Williams, allowing 37 sacks on the year and constant pressure.

Here's another look at the TD pass from Andy Dalton to C.J. Uzomah. pic.twitter.com/yo5ZArluxJ

Dalton’s average pass was roughly 6.62 adjusted yards per attempt, playing into Boyd’s progression from the slot. In Dallas, Gallup’s speed and Lamb’s ability to win in contested catches should provide production in two locations. Add in Cooper and his “do it all” mentality, there should always be a check-down option for third and short.

Running backs also were vital to Cincinnati’s offense last season and during McCarthy’s stay in Green Bay. Joe Mixon and Giovanni Bernard combined for 521 of Dalton’s 3,494 passing yards from the backfield while scoring three times through the air. The runners in 2018 for the Packers finished with 586 yards and averaged nine yards per catches.

Should Dalton be called upon, the duo of Elliott and Tony Pollard should suffice. Since entering the league, the former Ohio State star has averaged 404.7 receiving yards per season while the Memphis rookie played a balanced role on third down — similar to that of Bernard in the Jungle.

Replacing Fredrick in the trenches

The Cowboys offensive line allowed 25 sacks with Prescott leading the charge – the second-fewest last year. Thanks to that, Moore’s offense took flight as the number one unit in the league. Young talent such as Gallup, Pollard, and Connor Williams all improved, thus creating a wrecking force for coordinators to prep.

Although the Cowboys will be without Travis Frederick, who retired this spring for medical reasons, the team could have found his replacement with another former Badger. Tyler Biadasz is another Madison-made lineman ready for action following an All-American 2019 season. His overall measurables won’t jump off the charts, but Biadasz’s high IQ and impact in the Big 10 should give Joe Looney a run for his money.

“Biadasz was productive and durable for Wisconsin as he was one of the best centers in college football the past three seasons,” PFN Lead NFL writer Tony Pauline said on Rimington Trophy winner. He offers scheme versatility at the next level and should be effective in a zone-blocking system, with expected improvement as he physically matures and adds strength to his frame.”

Jones built for the future in April with early selections of Lamb and cornerback Trevon Diggs. Additions such as Biadasz and Neville Gallimore might contribute early, but they will likely see their roles expand when the salary cap runs dry.

Recent picks and additions could also help with trading for an elite-level talent. A deal will likely be done before the season’s end on Prescott – who is set to make $31.4 million on the franchise tag in 2020. Dallas also extended Cooper with a brand new five-year contract worth $100 million earlier this offseason. Should a lesser-known receiver emerge as a starter, like Cedrick Wilson or undrafted rookie Kendrick Rogers, this could make Gallup expendable.

The former Colorado State product is entering the backend of his rookie contract after a 1,107 yard second season. Should he only build off those numbers, that should push his trade value higher heading into the midseason trade deadline. If Dallas’ pass rush or safety troubles continue to linger, packaging him in a deal for a name like Jamal Adams or Matthew Judon could be viewed as a win for all parties in the long game.

Michael Gallup has balled out, but reality is setting in and it's hard to be excited

If the Cowboys’ recent acquisitions on defense thrive, the team has a minimal two-year window to not only win the NFC East but be amongst the top contenders for a Super Bowl. Adding Lamb to an already well-rounded offense makes highly-touted players affordable in moves to pay Prescott the contract he has earned thus far.

For the first time in a long time, Jones won’t have to play the “what if” game in the future. Any injury or holdout could be mitigated by a promising prospect or capable veteran to come in right away.

In today’s NFL, the offense not only wins games but also championships now. For Dallas, their offense could be set to win in 2020 and for many years to come.