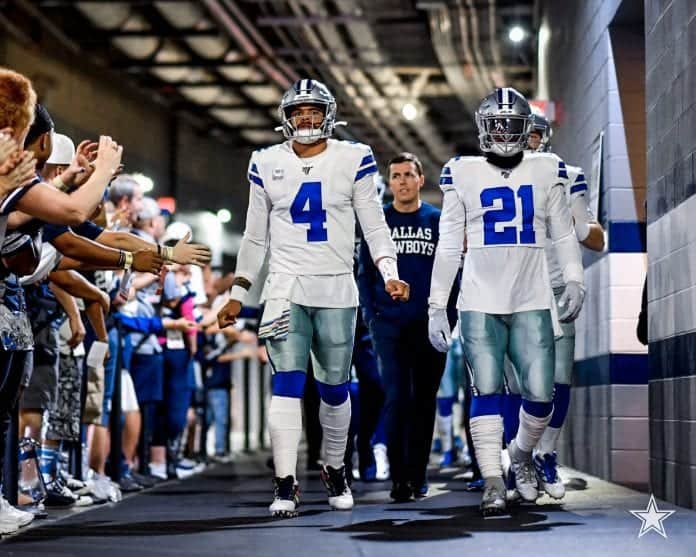 The Dallas Cowboys were the epitome of confusion during the 2019 season. Now, they return with some new names and a new head coach, but will it be enough for them to cash on some of their early prop bets?

The Dallas Cowboys were one of the most disappointing and confusing teams in the NFL during the 2019 season. They finished the year at 8-8 but fell just one game short of making the tournament and hosting a playoff game. Today, we will be looking at the 2020 Cowboys prop bets, including win totals, odds to make the playoffs and so much more!

Should you bet over or under on the Cowboys 9.5 win total?

According to Pro Football Reference, the Cowboys were expected to win 10.7 games during the 2019 season, and it’s not hard to see why. Dallas finished first in total yards last year and allowed the ninth-fewest yards on defense.

Typically, a No. 1 ranked offense and a top-10 defense translates not only into a playoff berth but a first-round bye. Instead, Dallas missed the playoffs entirely as they failed to win every close contest last season.

Dallas’ biggest downfall was their special teams unit, which likely cost them at least two wins. The Cowboys finished the season among the worst teams in the league in field goal percentage, kick return average, punt return average and net punt yardage.

The team gave away valuable yardage at nearly every turn and miscues against the Patriots and Vikings contributed to those losses.

Is Mike McCarthy an upgrade over Jason Garrett?

Dallas made the decision not to re-sign Jason Garrett in the off-season and hired Mike McCarthy as his replacement. While McCarthy isn’t on the level of other coaches such as Bill Belichick, Andy Reid or John Harbaugh, the hope is that he can be an upgrade over Garrett.

That shouldn’t be too hard considering Garrett was often a net-negative on game days, failing to be aggressive and bold when the situations called for it.

Oddsmakers believe the Cowboys will be a better team in 2020 as various sportsbooks, including BetMGM and DraftKings, have the team’s win total set at 9.5. But does that seem a bit too optimistic for a team with a new coaching staff? Maybe.

Will the Cowboys offense be better in 2020?

If you want to be optimistic about the Cowboys entering the 2020 season, look no further than their offense. The team did lose the likes of Travis Frederick, Jason Witten and Randall Cobb this offseason, but all three players are bigger “names” than what their play suggested last year.

Dallas drafted wide receiver CeeDee Lamb with the No. 17 pick in the 2020 NFL Draft and he figures to be the team’s top slot option with Amari Cooper and Michael Gallup on the outside.

A decline for the Cowboys defense?

The defensive side of the ball is where the Cowboys could see the most significant decline this season as they lost several key starters in free agency, including Byron Jones, Robert Quinn, and Maliek Collins.

But the hope is that with a more aggressive defense, the team can create more turnovers. Dallas finished the 2019 season with just 17 takeaways, tied for fourth-fewest in the NFL.

But given the talent on both sides of the ball, Dallas should be in the thick of things in the NFC once again this season. But betting on them to win 10 or more games with a new head coach seems risky. Take the value here and bet the Cowboys to win under 9.5 games (+145) in 2020.

Will the Dallas Cowboys make the playoffs in 2020?

At BetMGM, the Cowboys are currently -182 to make the playoffs. That does make some sense as the Cowboys have made the playoffs in two of the last four seasons with Dak Prescott under center and have yet to have a losing record. But are those odds too high?

As it stands right now, it appears the Cowboys and the Eagles are really the only two teams competing for the NFC East crown as the Giants and Redskins are in the midst of a rebuild. Both sides changed coaching staffs and each squad has a young, second-year quarterback leading their team. It seems unlikely that either will win more than six or seven games this season, leaving Dallas and Philadelphia to battle for the top spot.

Since 2009, the Cowboys or the Eagles have won the division in eight of the last 11 seasons. And in a few of those seasons, such as in 2018, both teams went on to make the playoffs.

More than likely, it will be one of these two teams winning the NFC East, which is why the -182 odds isn’t far off, especially when you consider that the playoffs are expanding this season to seven teams in each conference.

However, the NFC, in general, is a loaded conference and teams will still likely need ten or more wins to make the tournament. In a year in which the Cowboys are ushering in a new head coach and their star quarterback is in the middle of a contract dispute, it wouldn’t be a shock to see this team narrowly miss the playoffs. And with odds at +150, that’s probably the safer bet at this point.