Can Bengals quarterback Joe Burrow get A.J. Green back to Pro Bowl level?

Veteran wide receiver A.J. Green will be looking for his comeback year in 2020. Is a new Bengals quarterback enough to help him get back to Pro Bowl level production after missing a full season?

By Chase Haynes
May 18, 2020
Jump around this article Click to show
Green is finally healthy again
Green’s past OSM history
Joe Burrow’s impact on Green

It looks like A.J. Green is already on board the Joe Burrow hype train. After the Bengals grabbed quarterback Joe Burrow as the overall pick in the 2020 NFL Draft, the nine-year veteran wide receiver said that he has already seen the potential, not just for the team’s success, but for his own personal production too. Green has been a top-tier wide receiver, but is a new quarterback in Cincinnati enough to take A.J. Green back to the Pro Bowl level?

A.J. Green is a household name when it comes to NFL receivers. He was drafted in 2011 and has been consistently one of the top wide receivers year after year. But unfortunately, Green hasn’t been able to see any on-field action since December 2018. He suffered a season-ending toe injury in Week 13 of the 2018 season, followed by another season-ending ankle injury during the 2019 training camp that prevented him from playing a single game last season.

Despite his injury-riddled past, the Bengals front office says that Green is healthy and ready for the 2020 season. And it sounds like Green is excited to play with Cincinnati’s new star quarterback as well. Recently, Green told Bengals.com writer Geoff Hobson that “[Burrow’s] going to be the leader of our team” and is already rallying behind the Bengals new rookie quarterback.

He also mentioned being ready to start catching passes and practicing with Burrow wherever, whenever. In the same interview, he stated, “I know [Burrow] wants to get together and throw somewhere. I told him wherever he is, we’ll come to him.”

All signs are pointing to the days of sitting sidelined being behind him. But just how excited should Bengals fans be about a healthy A.J. Green? Over the last several seasons, Green’s individual production has been very consistent. According to the PFN Offensive Share Metric, Green has put up overall season OSM grades of 28.98, 28.01, and 32.38 over the 2018, 2017, and 2016 seasons respectively. For grading purposes, any OSM grade north of 30 is considered Very Good for NFL receivers.

For his individual production, Green has been a consistently good receiver over the span of his last few seasons. A high-20 to low-30 OSM grade is normally what you look for in a reliable receiver that you can trust in a game making situation. But there is quite a difference between a reliable receiver and a top-tier receiver. In 2017, for example, Green’s most recent full season, his 28.01 OSM grade was a very respectable grade, but it ranked WR73 in the NFL. The top 20 NFL wide receivers in 2017 were averaging overall season OSM grades of at least 34.50.

But remember, there’s a new man throwing passes for Cincinnati in 2020 that makes one of Green’s stats in particular definitely a little more eye-catching. His average targeted air yards in 2018 was 12.7, 13.3 yards in 2017, and 13.4 yards in 2016. Green is able to use his speed and separation to position himself as a reliable downfield receiver. This is just what Joe Burrow will be looking for.

At LSU, quarterback Joe Burrow exhibited that he likes to throw downfield and can be very accurate with his passes. Just look at his statistics from the 2019 season. His average adjusted yards per attempted pass was 12.5 yards downfield with a 76.30 completion percentage. Put this alongside a veteran receiver who averaged a TAY of 13.13, and it’s a match made in football heaven. 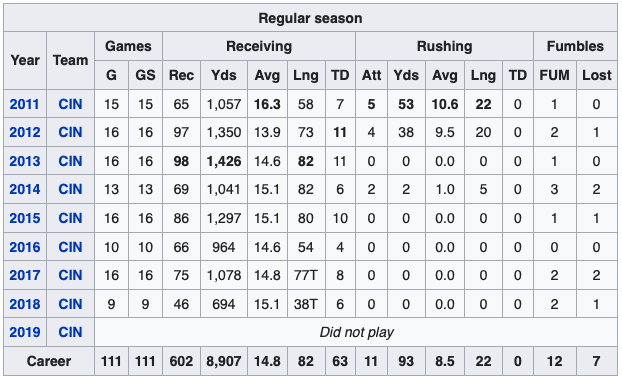 All of the pieces are coming together for A.J. Green to make the 2020 season his comeback year. He’s finally healthy, he’s bought into his new quarterback, and his overall skill-set will vibe admirably with the type of receiver that Joe Burrow likes to throw to. If Green can avoid injury and stay healthy this year, expect some big numbers from him.

The Bengals overall still have some building to do, but their passing offense has the potential to put up some high stats this year. Green and Burrow together should make a dangerous pair for defenders over the course of the 2020 season, and I am definitely expecting Green to add an eighth Pro Bowl appearance to his resume.

Thoughts on this feature? Something you would like to see during the offseason? Follow us on Twitter or join in on the conversation on Facebook. You can also check out my other articles from this season here.