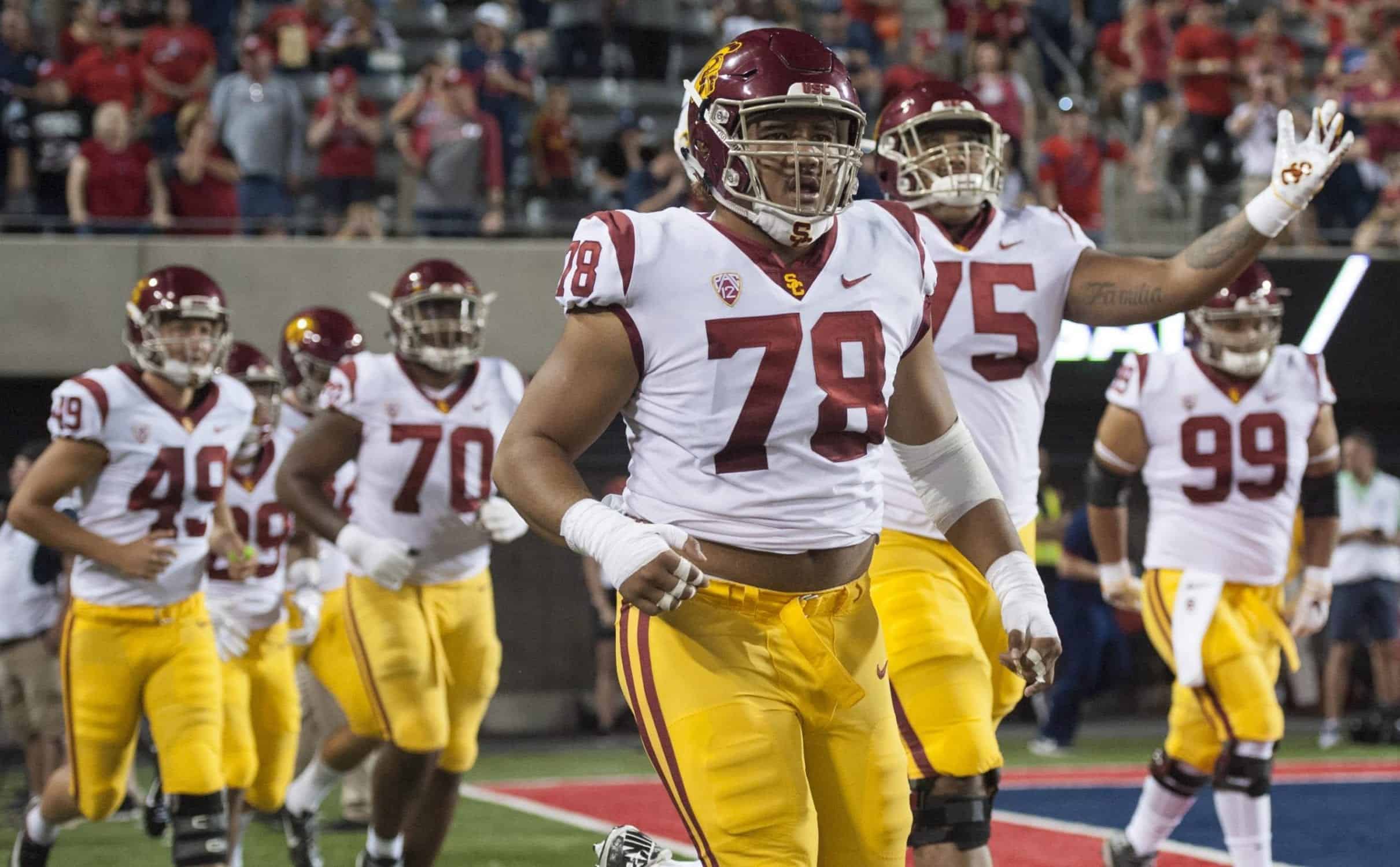 The top of the defensive tackle class for the 2021 NFL Draft is already shaping up to have some interesting names atop it. Next season, prospects such as Marvin Wilson, Jaylen Twyman, and Tyler Shelvin will be looking to make strong cases in an attempt to rise up draft boards. We could even have a few players from this position hear their name called in round one next April.

Out west is no different, as USC defensive tackle Jay Tufele is without question a name to watch in the upcoming draft cycle. In fact, the Trojans will sport more than just Tufele upfront in 2020. In fact, there is a good chance that USC may have two top defensive line prospects in the upcoming draft. Not only will we break down why Tufele is so promising, but we will also look at another intriguing name among USC defensive linemen, Caleb Tremblay.

Two USC defensive linemen who could be first-round prospects

Tufele easily stands out when watching the Trojan defensive line. He is coming off a very strong season, which included a spot on the first-team All-Pac 12. There is a good reason he has been recognized over the years, as he is both strong and athletic. At 6’3”, 315 pounds, Tufele moves very well for his size and has the looks of a pretty good three-technique at the next level. He may not be as physically dominant as guys such as Wilson or Shelvin, but that does not mean he cannot hold his own and is not something that is a knock on him.

Tufele has a knack for getting pressure up the middle on opposing quarterbacks and not giving them a clean pocket on the inside to work with. He may not constantly get to the quarterback (just 4.5 sacks in 2019) but he gets the dirty work done for his fellow Trojans. When it comes to the run game, Tufele is very solid in that as well. His 6.5 tackles for loss in 2019 is evidence of that. He has a good upfield burst to put pressure on the offensive line, will get rid of his blockers, and make the tackle.

His effort and motor always show up on film. A good example is his scoop-and-score from 2018 against Utah.

DT Jay Tufele picks up a Tyler Huntley fumble a runs it in for a TD – #USC leads #Utah 14-0 #FightOn pic.twitter.com/QeO1oQNjWN

Another thing to note is the hand usage, as Tufele is very quick with his hands, which is what allowed him to get off of his blocker and be in a perfect position to grab the loose football. After that, he was off to the races.

There is no doubt Tufele is the man in charge of that defensive line and is a player with top-five defensive tackle potential in next year’s draft. If you want to check him out for yourself, here are a couple of his games from 2019 against Fresno State and Notre Dame.

While looking at Tufele’s film, there were also plenty of times where it became hard to ignore Tremblay, who was a junior college transfer in 2018. He is very athletic and quick off the football. He also demonstrates a good speed rush in getting to the quarterback but does not offer much in the power game. If he builds that power part of his game, he could add a nice stable of moves for getting to the quarterback. Nonetheless, he is reasonably good at bending his body and turning the corner when rushing the passer.

USC also moves Tremblay around, playing him at both tackle and end, allowing him to use his speed inside on some passing-down situations. Additionally, 2019 was more of a year where he was really getting more comfortable with Pac-12 play. He only appeared in three games in 2018, before a knee sprain cost him the remainder of the season, so he was still working his way into USC’s rotation.

He also missed part of USC’s spring drills because of that knee strain, as well as being banged up during the Arizona State game due to a stinger. He did find the starting lineup in two games for the Trojans, against Colorado and Oregon. 2020 should see Tremblay really begin to shine and become more of a focal point on the defensive line as he enters his senior season.

Tremblay is certainly draftable right now but still has some developing to do. As mentioned earlier, he doesn’t quite have a large array of pass-rushing moves. He can stand to improve on speed to power or power to speed. It will be interesting to see if he can build his repertoire in that area. But as we tend to say often in this game, speed kills. And Tremblay is very good so far in that area.

It was good to see him play a full season after his 2018 injury. Now he just needs to build on his pass-rushing and run-defending. He’s got a good start with the speed and athleticism, but it is about putting all the pieces of the puzzle together. Ultimately, while Tufele is the anchor and star of this group, Tremblay is a name to have on your radar when you watch the USC defensive linemen play in 2020.