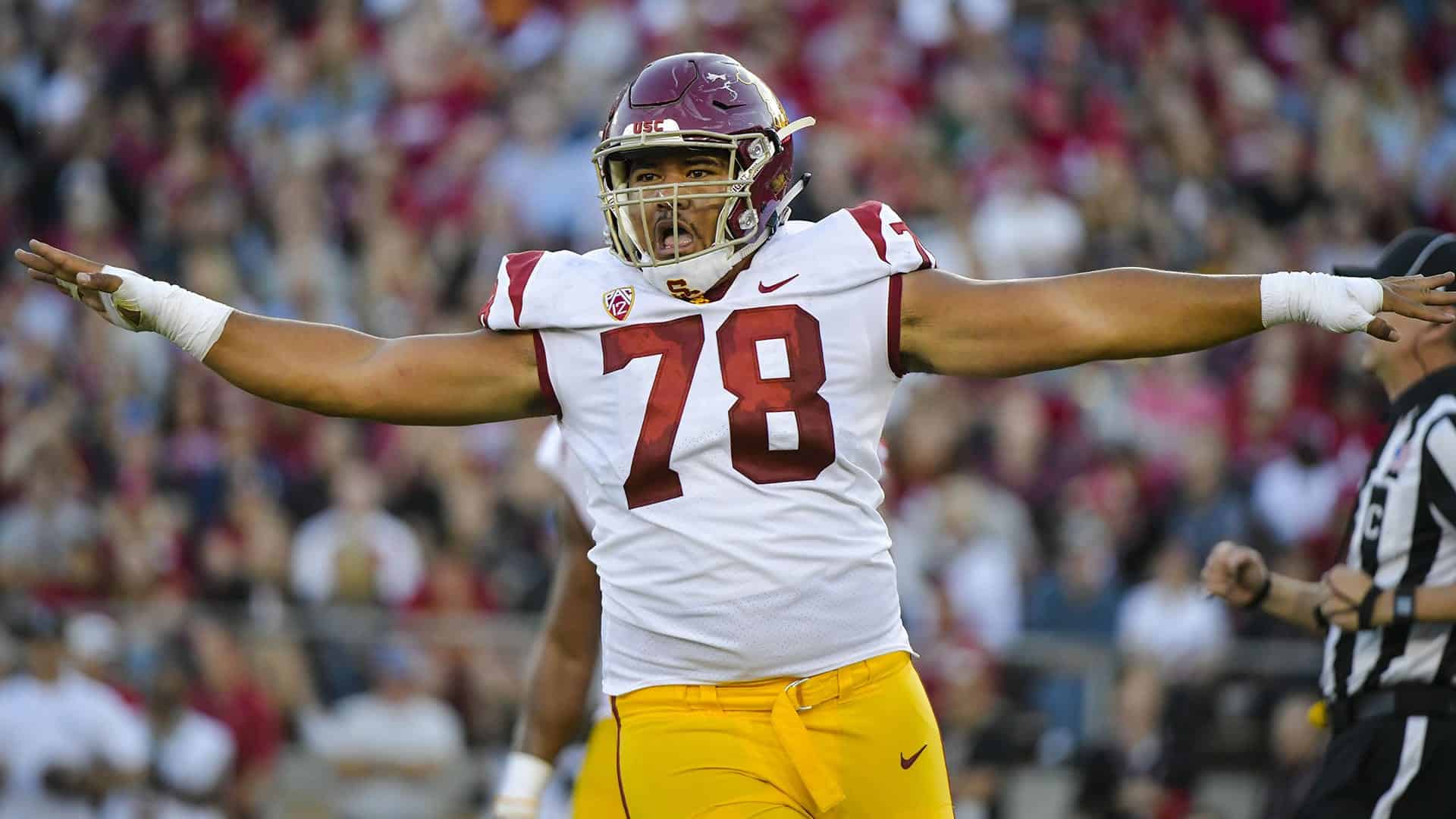 When it comes to the NFL Draft, versatility and positional value is the name of the game, and we have that in droves when it comes to the top-five defensive tackle prospects in the 2021 NFL Draft. Some years, there are high-end talents that fit the nose and 3-4 teams the best, while other drafts feature quicker, explosive four-person front prospects that can get upfield. The 2021 group of top-five defensive tackle prospects features a great group with a mixture of candidates that can fit into almost any type of defensive scheme.

Below, I will take a look at five of the most talented and impactful players at the defensive tackle position heading into the 2020 college football season. This position is an extremely scheme-diverse group that will help a variety of coaches and coordinators. In my last piece, I discussed the talented edge rusher group, but now I will focus on the big boys. This position group is a deep one that features a handful of players that could be first or second-round selections. The 2020 draft features some great talent on the defensive line as well, but 2021 could be a spectacular year for the interior prospects on defense.

Despite a lack of elite talent around him at Florida State last season, Wilson proved to be a dominant talent in the middle of the Seminole defense. Wilson was on many watch lists heading into the 2019 season and will top many of those same lists in 2020. The talented lineman flashed big-time this past season and showed to be a real force clogging the run and getting after the passer.

Wilson was a former prep star before committing to the Seminoles and has shown significant improvement each season in Tallahassee. He was the consensus top player at the position for the high school level and appeared to be trending in the same direction as a collegiate heading to the NFL. Take a look at the power generated here by Wilson as he throws the lineman to the ground and then bulldozes the running back right into the quarterback.

Wilson shows elite traits as a defensive lineman, including top-end strength, explosion, and quick hands. Recently, PFN’s own Matt Valdovinos called Wilson a “destructive force” and says that he has the talent to be the next great defensive tackle prospect. He has ideal size for the position, and is athletic enough to fit in multiple schemes and be a consistent force for any defensive unit.

Wilson’s decision to return to school may have been one of the more surprising outcomes of this offseason. Wilson would likely have been a top-25 player in the 2020 NFL Draft, but he decided to return to school to improve his draft stock even further. He is one of the top-five defensive tackle prospects and another monster season for Wilson could put him squarely in the top-15 or even top-10 mix overall for the 2021 NFL Draft.

Jay Tufele is coming off a very impactful redshirt-sophomore season for the Trojans. He is another scheme-diverse prospect for the 2021 NFL Draft cycle who can play inside and out in almost any type of defense. He’s earned plus marks against both the pass and run in his two years at USC thus far.

Tufele is another highly rated high school recruit landed by the Trojans in 2016. He redshirted his first season in Los Angeles but has since made a sizable impact as one of the better interior linemen in the country. Tufele started five games as a redshirt-freshman before becoming a regular starter in 2019.

Tufele is quicker and slightly more explosive than Wilson but lacks the power and impactful plays that my number one player has shown. However, he does have 7.5 sacks and 11 tackles for a loss in two seasons. He is still growing into the position and could potentially become a top-10 player in this draft class. Tufele is lightning quick off the snap and consistently beats interior offensive linemen into the backfield. His size and quickness on the defensive line remind me of former Trojan and 2009 second-round pick of the Indianapolis Colts, Fili Moala.

One of my favorite players in college football… pic.twitter.com/BBB8S0wXe9

Tufele returns for his junior season on a USC team that went 8-5 overall last season and should improve in 2020. The Trojans should be one of the better defensive units this season with the help of Tufele upfront. He’s a sure-fire first-rounder and could even sneak into the top-15 with another strong season.

Darius Stills has been a consistent force for the Mountaineers since his arrival in 2017. He decided to return to West Virginia for the 2020 season, despite a solid year in 2019. Stills led the team with 14.5 tackles for a loss and recorded seven sacks, mostly from the nose tackle position. He’s a tad undersized for a nose tackle, but he’s powerful at the point of attack and is a sure tackler on the defensive line. He plays with a nasty demeanor that teams will love from a front-seven player. He recorded three sacks in a showdown with Baylor last season and earned All-Big 12 honors for his 11 starts as a junior.

The Mountaineers’ stud nose tackle had worked under a 3-3-5 base defense in his first two years at West Virginia before moving to more 3-4 looks in 2019 under new defensive coordinator Vic Koenning. Therefore, he is tailor-made for that nose position in the pros and should fit seamlessly with teams such as the Denver Broncos, Indianapolis Colts, or even the defending Super Bowl Champion Kansas City Chiefs.

Stills is a great leader and well respected among teammates, opposing players and coaches. He will be a great locker room guy, a hard worker, and is an extremely intelligent player. Stills should work his way into the first-round mix during his final year in Morgantown as one of the top-five defensive tackles in this draft.

When you talk about a player in this draft with unlimited potential, Lorenzo Neal is a player that fits the mold. If not for an injury suffered before the 2019 season, Neal likely would have gone on to become a first-rounder in the 2020 NFL Draft. The big defensive tackle sustained an injury before the team’s bowl game in 2018 and was not able to return to the field in 2019. Therefore, Neal decided to make use of his redshirt status and return for a fifth season as a senior with the Boilermakers.

Neal is an extraordinarily talented and dominant player upfront and has racked up 11.5 career tackles for a loss at Purdue. If he can stay healthy and regain his dominant pre-injury level of play, Neal’s return will be a massive boost to the Purdue defense that ranked 12th in the Big Ten against the run in 2019.

Neal has been an NFL player in the making, even from an early age. His father, Lorenzo Neal Sr., played 16 seasons in the NFL with Saints, Jets, Buccaneers, Titans, Bengals, Chargers, Ravens, and Raiders. The highlights of his game include a great deal of power, and he possesses the ideal NFL size for a defensive tackle at 6’3, 315 pounds. Neal can use his size to overwhelm blockers and ball carriers. He has made a career out of embarrassing opposing offensive linemen and showing he can be a dominant interior presence in the Big Ten. I would have slotted him directly behind Auburn star Derrick Brown before the 2019 season, and he could be one of the top-five defensive tackle prospects off the board in the 2021 NFL Draft.

This selection of LaBryan Ray is based more so on his production in 2018, rather than an injury-shortened 2019 season. Ray’s build and skill-set are reminiscent of former Alabama star Da’Ron Payne, who was a former first-rounder and has experienced success with the Washington Redskins. He has had two seasons cut short due to lower leg injuries and must prove he can stay healthy in 2020. He has shown tremendous ability and upside during his limited time with the Crimson Tide.

During Ray’s sophomore season, he racked up 39 tackles, 2.5 sacks and six tackles for a loss despite only making one start in 15 games. Ray is a versatile interior defensive player and could fit inside a four-person front and multiple defensive schemes. However, he has the most experience playing the 5-technique role inside of a 3-4 scheme at Alabama. He is the prototype and has the ideal size and mobility for that position. That will lead to substantial interest from teams running three-person base fronts such as the Pittsburgh Steelers, New York Jets, and Green Bay Packers. With a healthy, productive season in 2020, Ray could hear his name called towards the back half of the second round.