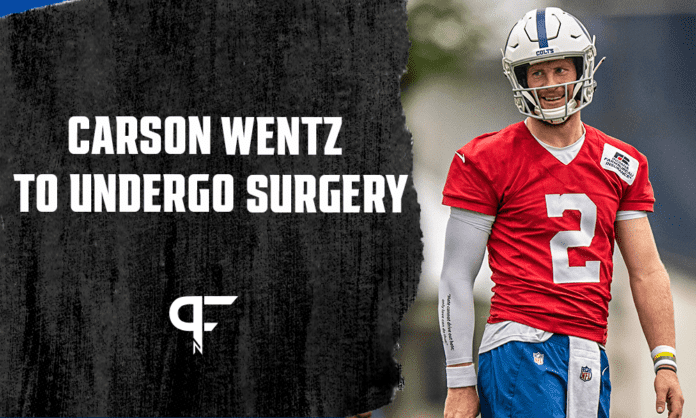 How will the Colts be impacted by Carson Wentz's injury and the recent news that he will miss time due to surgery for his foot?

By Adam H. Beasley
August 2, 2021
What's in this article? Click to show
What is the timetable for Carson Wentz’s return from injury?
How does Carson Wentz’s injury impact the Colts and Eagles?
Want more NFL news and analysis?

What is the timetable for Carson Wentz’s return from injury?

Reich said Wentz, who has played a full season just twice in his career, will be out five to 12 weeks after his surgery to repair a broken metatarsal. That means he could be back for the opener or miss the first seven weeks of the season. A better timeframe will emerge once Wentz begins rehab.

The injury is actually an old one, dating back as far as high school. But it worsened in time, and the pain during training camp became too much to continue.

Wentz elected for surgery over the weekend after consulting with foot specialist Dr. Robert Anderson.

Reich, who returned to work after testing positive for COVID-19 and missing the start of training camp, stated, “It was a gut punch for Wentz for about two hours.”

How does Carson Wentz’s injury impact the Colts and Eagles?

Should Wentz miss more than 30% of his team’s snaps this year, the Eagles would get a second-round pick from Indianapolis as compensation in the trade for the signal-caller  — not the first-rounder that many in Philly had hoped.

But more significantly, an extended absence would seriously imperil Indy’s playoff hopes. Unless the Colts can somehow convince Philip Rivers to come out of retirement or the 49ers to trade their current starting quarterback, Jimmy Garoppolo, their likelihood of a postseason appearance is slim.

Truth is, there isn’t a particularly good Plan B currently on Indianapolis’ roster.

On Saturday, the Colts signed free-agent quarterback Brett Hundley, who immediately became Indy’s most accomplished quarterback. Hundley joins Jacob Eason, Sam Ehlinger, and Jalen Morton — none of whom have ever thrown an NFL pass.

Hundley, a fifth-round pick in 2015, has completed 59.1% of his passes for 1,902 yards, 9 touchdowns, and 13 interceptions as a Green Bay Packer and Arizona Cardinal. He practiced with his new team for the first time on July 31.

For now, it appears the Colts are going with Eason. Reich told the 2020 fourth-round pick that “it’s your show.”

Eason, who looks the part at 6’6″ and 231 pounds, completed 59.8% of his passes for 5,590 yards, 39 touchdowns, and 16 interceptions in his college career at Georgia and Washington. Expect him to get a heavy workload in the preseason, even though he’s on track to start Week 1. Put simply, Eason needs the reps.