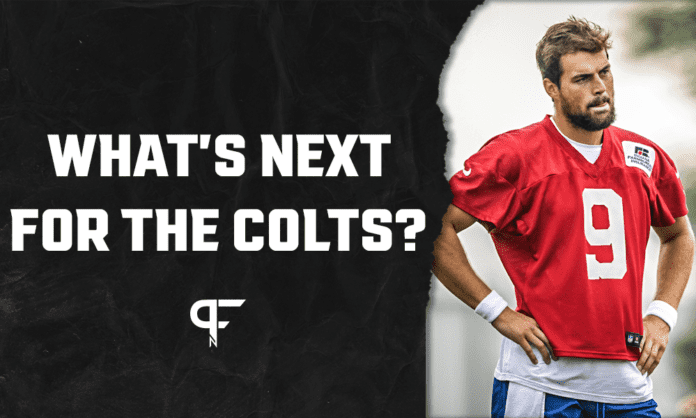 With Carson Wentz out indefinitely with a significant foot injury, the Colts signed free-agent QB Brett Hundley as a temporary replacement.

Hundley will compete with Jacob Eason, Sam Ehlinger, and Jalen Morton — none of whom have ever thrown an NFL pass.

Wentz is out indefinitely with a significant foot injury. ESPN reported the Colts have asked foot specialist Dr. Robert Anderson to consult on the injury. But the Colts all but acknowledged he would be out for at least the beginning of the season by signing Hundley, who has not appeared in a game since 2019.

This all happened as Colts head coach Frank Reich battled COVID-19. He’s been in quarantine since before the start of practice, but will return to the team Monday, defensive coordinator Matt Eberflus told reporters after Saturday’s practice.

Eberflus provided no further update on Wentz’s condition during his Saturday news conference.

Hundley practices with the Colts

Hundley, a fifth-round pick in 2015, has completed 59.1 percent of his passes for 1,902 yards, 9 touchdowns, and 13 interceptions for the Green Bay Packers and Arizona Cardinals. He practiced with his new team for the first time on Saturday.

That practice went pretty poorly for the offense. Jim Ayello of the Indianapolis Star reports that Eason — who has taken first-team reps — threw multiple interceptions, including one returned for a touchdown.

“I’m fortunate to be getting these reps right now,” Eason said, according to WISH-TV. “… I’m just taking it one day at a time, one snap at a time. That’s where we’re at.”

The Colts selected Eason in the fourth round of the 2020 NFL Draft after a college career he spent at Georgia and Washington. Indianapolis doubled down on the position in 2021, taking Ehlinger in Round 6. A few months earlier, they signed Morton, who spent his rookie season out of Prairie View A&M, to a futures contract.

As of Saturday afternoon, the Colts’ regular-season win total was still 9.5 on DraftKings, but that’s certain to fall if Wentz’s prognosis worsens.