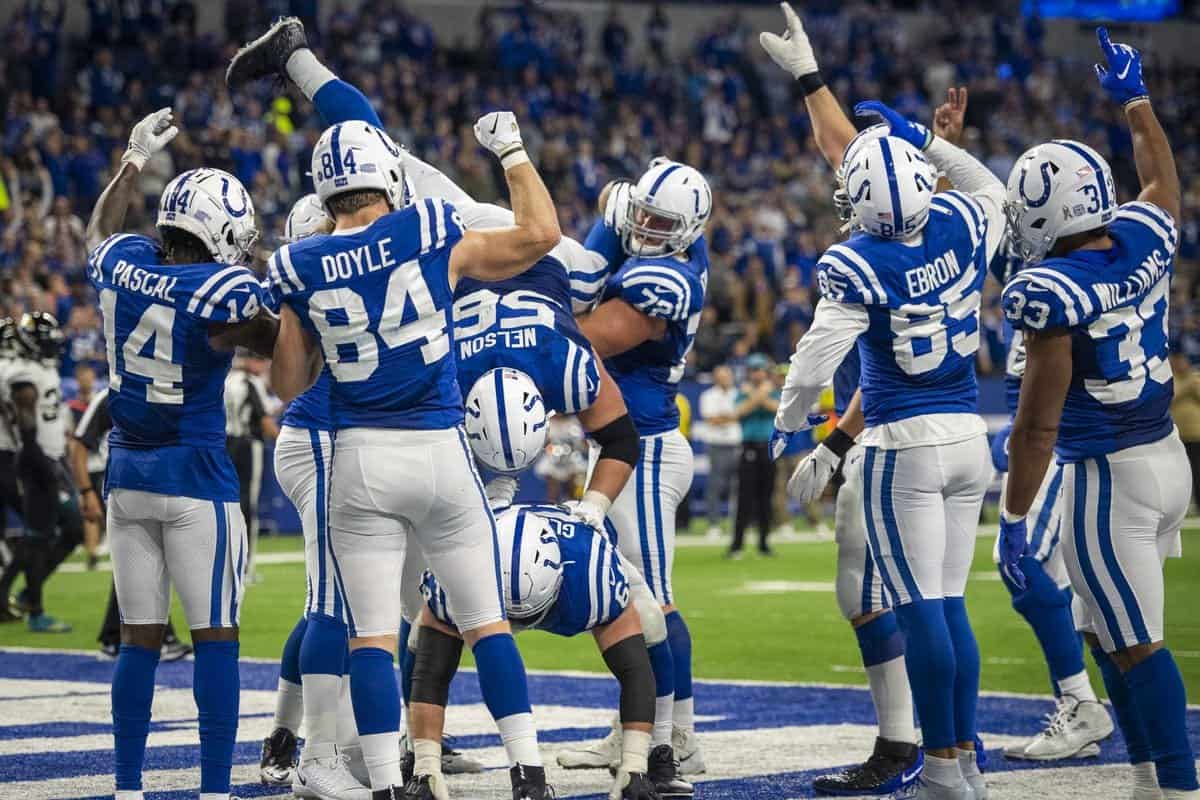 Coming into the 2020 season, the Indianapolis Colts retain the majority of their core coaches. The remaining members of last year’s team will join forces with some new faces in hopes of improving their 7-9 record from 2019. The big question remains, did the team do enough to be able to surpass their win total of 8.5?

The significant change on this year’s team is, of course, at the quarterback position, where seasoned veteran Philip Rivers will take the reigns from Jacoby Brissett. Brissett was a great game manager in 2019, leading the Colts offense to 16th in points per game, but he did not showcase the big-play ability necessary to be a starting QB in the NFL.

Can Rivers act as the catalyst that will push this team to nine or more wins and an AFC South title? We dive into what to expect from Indianapolis this year while keeping an eye out for any interesting season-long props that we can make money on.

The Colts did not have a ton of turnover this past offseason, however, there are a few names that are no longer with the team. Those names include Devin Funchess, Jabaal Sheard, and Pierre Desir. I believe the Colts improved at all the positions of these departures this offseason.

They added the talented wide receiver Michael Pittman from USC in the draft. Pittman is an upgrade from Funchess who consistently has had trouble separating in his career. When looking at Pittman’s Relative Athletic Score, which takes player measurements and put them on an easy to understand 0 to 10 scale compared to their position group, we can see that he excelled in nearly all important fields. He finished with an “Elite” score of 8.29 and should be a substantial weapon for Rivers.

They also added Pro Bowl defensive lineman DeForest Buckner who promises to be not only an upgrade over Sheard but also a dominant force across the defensive front. Lastly, they added Xavier Rhodes at the cornerback position as an upgrade over Desir. Many believe Rhodes’ best days are behind him; however, I believe Rhodes is primed for a bounce-back season.

The other main addition the Colts made this offseason is Jonathan Taylor out of Wisconsin in the second round of the draft. Taylor showcased his amazing ability early and often during his time in college, finishing as the sixth-leading rusher in NCAA history. I believe he has the skill set that will allow him to continue that high-level of production in the NFL.

The Colts retained Marlon Mack, who rushed for 1,091 yards last year, and they view these two backs as a two-headed monster that will come close to splitting carries. The Colts rushed the fourth most per game in 2019, and their drafting of Taylor reaffirms their commitment to the run in 2020.

Despite last year’s 7-9 season, the Colts opened as the favorites to win the AFC South. While offseason additions like Rivers, Buckner, and Taylor are helping to fuel the heightened expectations for the 2020 team, the Colts’ ability to retain their high-level talent is the main focus of their hype train.

On offense, T.Y. Hilton is a star who, previous to 2019, had five consecutive 1,000-yard seasons. He did not eclipse the 1,000-yard mark last year due to a nagging calf injury, but look for Hilton’s resiliency with Rivers at the helm.

Furthermore, the Colts return all five starters along the offensive line. This is a line that ranked towards the top of the league in most major categories and was a major reason Rivers ultimately signed with the Colts. Quenton Nelson is the top guard in the NFL, and he, along with Anthony Castonzo, Ryan Kelly, and others, will look to make themselves felt in both the run and the pass similar to 2019.

We also see the same Pro Bowl-caliber talent returning to the defensive side of the ball in 2020 as we do the offense. The unit as a whole was just 18th in points against in 2019, but the pieces are present for this defense to jump into the top 10 in 2020. Linebacker Darius Leonard headlines this side of the ball. He was a steal in the 2018 draft and is a top-five linebacker in the NFL.

Malik Hooker leads a secondary that will look to improve with the addition of Rhodes and with Rock Ya-Sin getting another year under his belt. Add All-Pro defensive linemen Buckner and Justin Houston to the trenches, and you have all the makings of an elite defense. If the scheme is there and they can avoid injuries, look for the Colts defense to shine in 2020.

Related: The Colts have the chance to make a deep playoff run in 2020

According to the Sharp football schedule matrix, which ranks strength of schedule based on 2020 opponent season win totals, the Colts have the easiest schedule in the NFL. With so much turnover since the 2019 season, I believe using this metric to predict the strength of schedule is the most accurate, and therefore, the Colts should be feeling great about their 2020 schedule.

The AFC South is a division that is infamous for its ebbs and flows, and the division looks to be down in 2020. The Jaguars have so much turmoil surrounding their franchise that they have star players getting in disputes on Twitter with ownership. They are in full rebuild, and I fully expect the Colts to pick up two wins here.

The Texans also appear to be in disarray despite their recent success. In my opinion, the Texans and Bill O’Brien were the biggest losers of the NFL offseason, and I expect the Colts to pick up one and more than likely two wins here as well. The Titans will likely be a formidable opponent, but with the rest of the division down, I like the Colts to go 4-2 or 5-1 in the division this year.

Outside of the division, the Colts and the rest of the AFC South will play the AFC North and the NFC North. The Colts were lucky to draw the best teams in these divisions at home, as they will play host to the Vikings, Ravens, and Packers. The bottom half of these divisions are relatively weak, and I expect the Colts to go on the road and pick up a few wins in these non-divisional games.

With the majority of the Colts’ toughest opponents coming to Lucas Oil Stadium, PFN analyst Cole Thompson sees the Colts going 10-6 this year. The schedule and talent certainly seem to favor them reaching double-digit wins in 2020.

The Colts over/under sits at 8.5 (-160) on FanDuel. While this team has a talented roster, uncertainties around their overall depth, and questions regarding how much Rivers has left in the tank, have me making the over just a lean. Instead, I will use Indianapolis’ clear emphasis on the run game and the aforementioned QB concerns, to bring me to my future prop, Rivers under 4,099.5 yards (-112) on FanDuel.

Rivers may have thrown for over 4,600 yards in 2019, but expect the run-first mentality to milk the clock early and often. The run game’s success will all but certainly reduce Rivers to more of a game manager, as one of the main factors leading to this team’s success is mitigating turnovers. I think this role is preferred for Rivers, as his 20 interceptions and 48.6 QBR in 2019 suggest he is no longer capable of carrying the full offensive burden on his 38-year-old arm.

Furthermore, the solid defensive unit and weak opposing schedule suggest the Colts will be up in the second half of games this year, leading them to lean on the run game and milk the clock rather than save time passing. The Colts will likely win more games in 2020 than they did last year, but it will not be because Rivers throws for more than 4,100 yards.