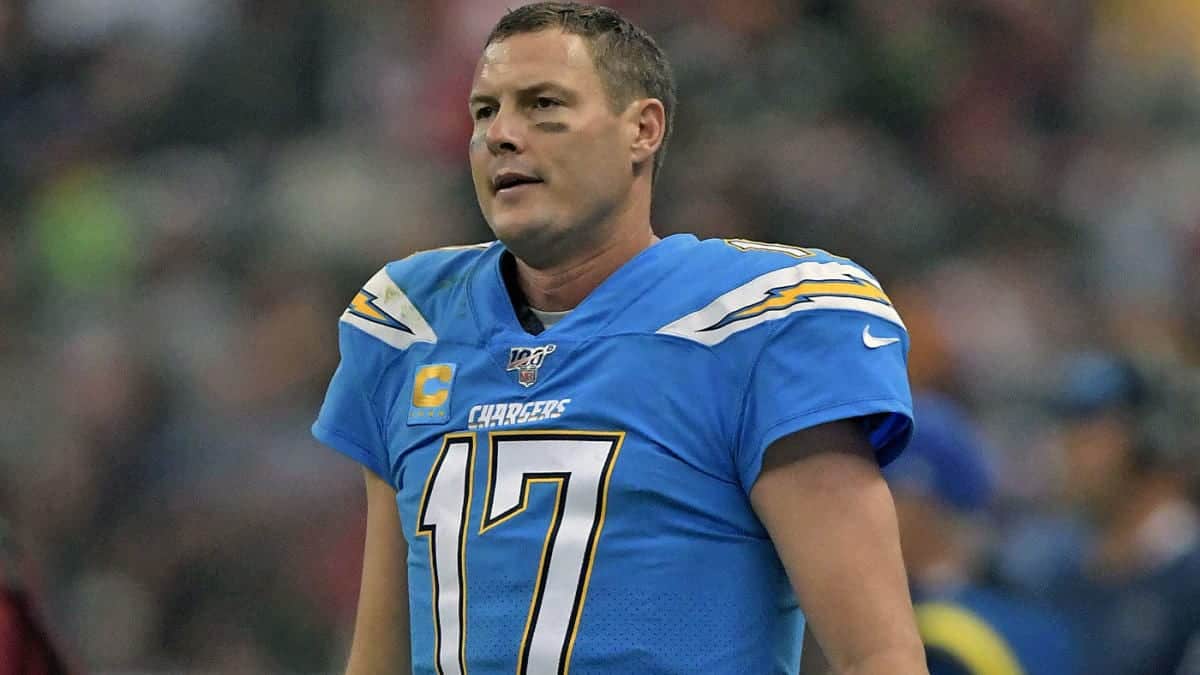 What's in this article? Click to show
Could Frank Reich be the reason Rivers chooses the Colts?
With Rivers at QB, where would the Colts look in the 2020 NFL Draft?
Could Rivers sign with the Buccaneers instead?

After spending 16 seasons as the starting quarterback for the Los Angeles Chargers, Philip Rivers and the team agreed to mutually part ways shortly after the end of the 2019 season. With Rivers still wanting to play football, many have wondered where he will sign when free agency begins. According to PFN Insider Tony Pauline, it very well could be the Indianapolis Colts. And if it isn’t the Colts, PFN Insider Ben Allbright says that we should keep an eye on the Tampa Bay Buccaneers.

In our 2020 NFL Scouting Combine News and Rumors Tracker, Pauline reported early Wednesday morning that people within NFL circles believe the Colts could be the potential landing spot for Rivers.

“It’s been reported the past few days that soon to be free agent Philip Rivers would be the perfect solution and people at the NFL Combine tell me they believe ‘this will happen.’ They point to the fact Rivers has a great relationship with head coach Frank Reich. It should also be an easy signing as the Colts are projected to have a lot of room under the cap.”

This chatter at the Combine comes weeks after the increasing buzz at the Senior Bowl. On January 20, Allbright reported as such, noting that the word coming from Mobile was around Rivers and the Buccaneers.

The Colts are likely looking for an answer at the QB position after a generally underwhelming season from Jacoby Brissett. They ended their 2019-20 campaign at 7-9 after starting 5-2 thanks in most part to Brissett’s subpar play.

In his 15 starts last year, Brissett actually ranked last in Pro Football Network’s Offensive Share Metric with an average overall score of 16.45. Although it may not seem like it, Rivers was actually a significant upgrade at QB08 with an overall score 27.08. Looking at most important NFL metrics, Rivers was a much better than Brissett in 2019, playing with what most would say was a much worse offensive line.

Could Frank Reich be the reason Rivers chooses the Colts?

Pauline reported that people at the Combine believe the relationship between Rivers and Colts head coach Frank Reich could be the deciding factor for the free-agent QB. It’s also important to note that Reich is not the only former Charger coach to now reside with the Colts. Rivers’ former positional coach – Nick Sirianni – is also in Indianapolis as Reich’s right-hand man.

During the three seasons where Rivers was coached by Reich and Sirianni (2013-14, 2014-15, 2015-16), he had 92 touchdowns to 42 interceptions while completing an above-average 67.4 percent of his pass attempts. Having an established connection with Reich and Sirianni goes a long way for a veteran being comfortable in a new environment.

Besides the coaching staff, Indianapolis has a number of other enticing options that could help land Rivers as the team’s starting quarterback in 2020. The most glaring would be the improvement in offensive line play. Over the course of the 2018 NFL regular season, Philip Rivers was the most pressured quarterback in the NFL. That didn’t improve very much in 2019 and likely helped contributed to Rivers’ 20 interceptions last season.

However, even with poor offensive line play, Rivers still completed 66 percent of his passes for 4,615 yards and 23 touchdowns. Another aspect for the soon to be 39-year-old QB to consider would be playing eight games a year inside of a dome at Lucas Oil Stadium. Not having to deal with any weather concerns at home might be a welcome incentive for the veteran.

With Rivers at QB, where would the Colts look in the 2020 NFL Draft?

With most analysts believing that the Colts would look to bring in a young QB prospect with the 13th overall pick in this year’s draft, that could change if they sign Rivers. In fact, Pauline has heard that they could bolster their defensive line.

“I’m told they will focus on pass rushers, front, and center. However, this assumes they don’t sign a pass rusher in free agency.”

Where they currently sit in the first round, they could benefit from the services of someone like South Carolina Gamecocks defensive lineman Javon Kinlaw.

In 37 games (34 starts) played in his three-year career at South Carolina, Kinlaw registered 82 total tackles, 17 tackles for a loss, 10 sacks, eight batted passes, three forced fumbles, and four fumble recoveries. He is a physical specimen and could help the Colts defensive line apply pressure to the quarterback.

As noted above, Allbright says that there may be another team in play for Rivers’ services. During the Senior Bowl, Allbright reported that there was increasing chatter regarding Rivers and the Tampa Bay Buccaneers. With Rivers having recently moved his family from San Diego to Florida, the whispers have not gotten any softer.

This offseason, head coach Bruce Arians has been non-committal on the future of quarterback Jameis Winston. When recently asked about his future and other players on the team, Arians did nothing to quiet the speculation that Tampa Bay may move in a different direction.

“No, because you don’t know who’s available. You’re just sitting and waiting to see is there someone available? And is he a better option?” said Arians, referring to the possibility that some players could be re-signed or tagged before they hit the open market. “I don’t think there’s that many guys involved. … I’d be shocked if it’s two.”

Arians and Tampa Bay could be looking to move on from Winston after an up and down season for the team. Winston became the first player in league history to throw for at least 30 touchdowns (33) and 30 interceptions (30). But although he led the league in passing yards (5,109), his 60.7 percent completion rate was the second-lowest of his career. The team finished with a 7-9 record and his turnovers were a detriment to the team.

Arians has been known for taking older quarterbacks and reviving their careers. He did the same thing in Arizona when the team traded for veteran Carson Palmer. Despite missing 10 games in 2014 and nine in 2017 with major injuries, Palmer won 38 games, third-most in Cardinals history, and had one of the franchise’s best individual seasons in 2015, when he completed 63.7 percent of his passes for 4,671 yards, 35 touchdowns, 11 interceptions and an NFL-leading 8.7 yards per attempt.

Arians also found success working with Ben Roethlisberger as offensive coordinator of the Pittsburgh Steelers, helping him develop into one of the better quarterbacks in the league. Don’t forget that was also in Andrew Luck‘s ear for his rookie season. If there is anyone that could revive Rivers’ career, it would be Arians.